The antisense approach is use of nucleic acids to reduce the expression of a specific target gene.

The antisense approach is use of nucleic acids to reduce the expression of a specific target gene. As shown in Figure 58.2, a small piece of DNA, an oligodeoxynu-cleotide that is in the reverse orientation (antisense) to a portion of a target messenger RNA (mRNA) species, is introduced into a cell and a DNA–RNA duplex is formed by complementary Watson-Crick base pairing. Cessation of protein synthesis then may result from the rapid degradation of the mRNA species due to activation of ri-bonuclease H+ or disruption of translation. 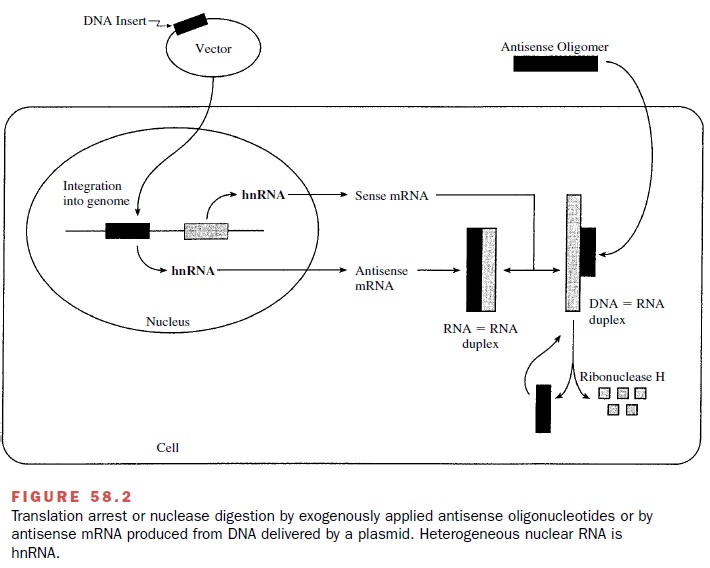 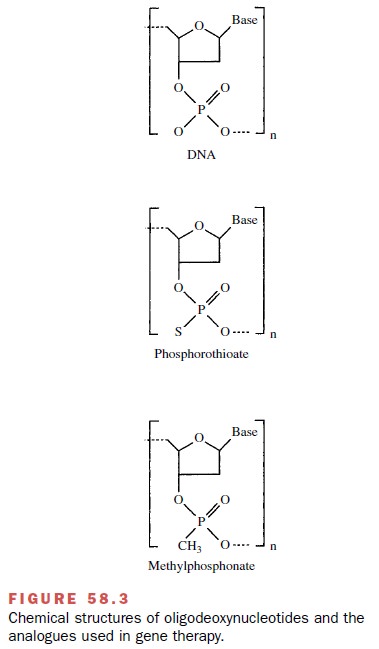 Cells and or-ganisms protect themselves against foreign DNA and RNA by producing nucleases that degrade phosphodi-ester bonds in oligodeoxynucleotides. Chemical modifi-cation of the phosphodiester moiety can produce nucle-ase-resistant oligomers. In the two most common chemical analogues, the backbone phosphate is replaced either with a methyl group to form a methyl phosphonate or with a sulfur group to form a phosphorothioate (Fig. 58.3). These modifications grant extra stability to the oligonucleotides, allowing for a longer half-life in vivo.

The antisense RNA can also be generated within cells after delivery via a plasmid or attenuated virus containing a suitable promoter that controls expression of the antisense strand using methods of gene insertion described later (Fig. 58.2). In addition to the strict anti-sense strategies, several related approaches have been considered. Catalytic RNA, catalytic DNA, or ribo-zymes capable of degrading complementary mRNA may decrease translation of targeted sequences. Oli-gomers designed to interact with genes directly via Hoogsteen hydrogen binding in a triplex formation have been suggested as a means of disrupting transcription (Fig. 58.4). Transcription factor decoys that are du-plexes designed to bind to a particular transcription fac-tor and prevent its normal function are another ap-proach examined in the context of NF B blockade. These strategies, like antisense itself, do not require in-tegration into the genome, and thus they share the phar-macological problems of absorption, distribution, me-tabolism, and elimination of any traditional drug not based on nucleic acid. 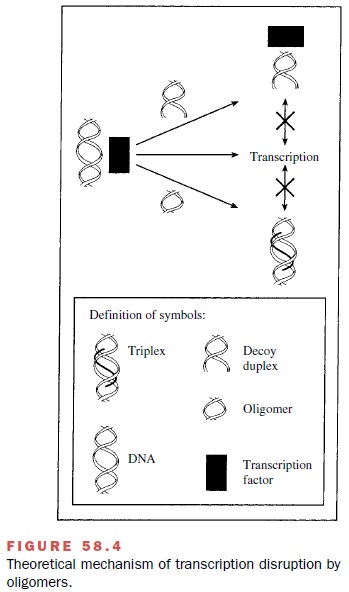