Gamma-hydroxybutyric acid (GHB) is produced during the metabolism of GABA, but the function of this endogenous agent is unknown at present.

Gamma-hydroxybutyric acid (GHB) is produced during the metabolism of GABA, but the function of this endogenous agent is unknown at present. The pharmacology of GHB is complex because there are two distinct binding sites. The protein that con-tains a high-affinity binding site (1 μM) for GHB has been cloned, but its involvement in the cellular effects of GHB at phar-macologic concentrations remains unclear. The low-affinity bind-ing site (1 mM) has been identified as the GABA B receptor. In mice that lack GABAB receptors, even very high doses of GHB have no effect; this suggests that GABAB receptors are the sole mediators of GHB’s pharmacologic action.

GHB was first synthesized in 1960 and introduced as a general anesthetic. Because of its narrow safety margin and its addictive potential, it is not available in the USA for this purpose at present. It can however be prescribed (under restricted access rules) to treat narcolepsy, because GHB decreases daytime sleepiness and episodes of cataplexy through a mechanism unrelated to the reward system. Before causing sedation and coma, GHB causes euphoria, enhanced sensory perceptions, a feeling of social closeness, and amnesia. These properties have made it a popular “club drug” that goes by colorful street names such as “liquid ecstasy,” “grievous bodily harm,” or “date rape drug.” As the latter name suggests, GHB has been used in date rapes because it is odorless and can be readily dissolved in beverages. It is rapidly absorbed after ingestion and reaches a maximal plasma concentration 20–30 minutes after ingestion of a 10–20 mg/kg dose. The elimination half-life is about 30 minutes.

Although GABAB receptors are expressed on all neurons of the VTA, GABA neurons are much more sensitive to GHB than are dopamine neurons (Figure 32–4). This is reflected by the EC50s, which differ by about one order of magnitude, and indicates the dif-ference in coupling efficiency of the GABAB receptor and the potas-sium channels responsible for the hyperpolarization. Because GHB is a weak agonist, only GABA neurons are inhibited at the concentra-tions typically obtained with recreational use. This feature may underlie the reinforcing effects of GHB and the basis for addiction to the drug. At higher doses, however, GHB also hyperpolarizes dopamine neurons, eventually completely inhibiting dopamine release. Such an inhibition of the VTA may in turn preclude its activation by other addictive drugs and may explain why GHB might have some usefulness as an “anticraving” compound. 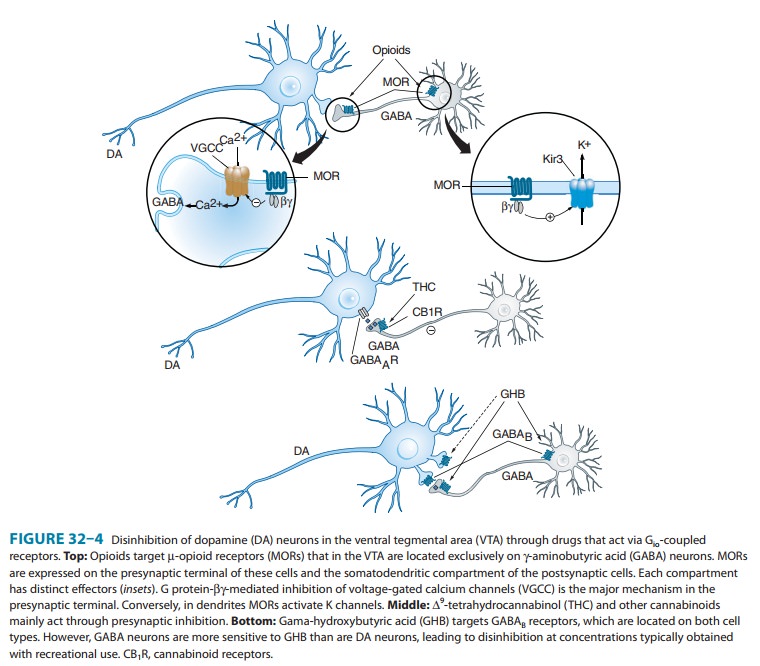