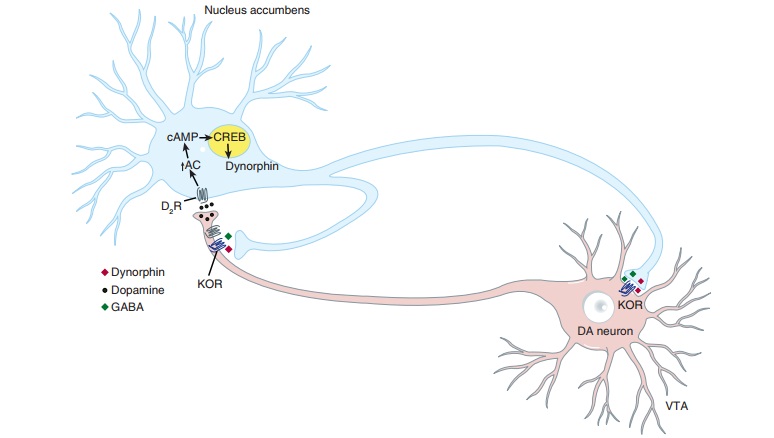 With chronic exposure to addictive drugs, the brain shows signs of adaptation.

With chronic exposure to addictive drugs, the brain shows signs of adaptation. For example, if morphine is used at short intervals, the dose has to be progressively increased over the course of several days to maintain rewarding or analgesic effects. This phenomenon is called tolerance. It may become a serious problem because of increasing side effects—eg, respiratory depression—that do not show much tolerance and may lead to fatalities associated with overdose.

Tolerance to opioids may be due to a reduction of the concen-tration of a drug or a shorter duration of action in a target system (pharmacokinetic tolerance).

Alternatively, it may involve changes of μ-opioid receptor function (pharmacodynamic tolerance). In fact, many μ-opioid receptor agonists promote strong receptor phosphorylation that triggers the recruitment of the adaptor pro-tein β-arrestin, causing G proteins to uncouple from the receptor and to internalize within minutes . Since this decreases signaling, it is tempting to explain tolerance by such a mechanism. However, morphine, which strongly induces toler-ance, does not recruit β-arrestins and fails to promote receptor internalization. Conversely, other agonists that drive receptor inter-nalization very efficiently induce only modest tolerance. Based on these observations, it has been hypothesized that desensitization and receptor internalization actually protect the cell from over-stimulation. In this model, morphine, by failing to trigger receptor endocytosis, disproportionally stimulates adaptive processes, whicheventually cause tolerance. Although the molecular identity of these processes is still under investigation, they may be similar to the ones involved in withdrawal .

Adaptive changes become fully apparent once drug exposure is terminated. This state is called withdrawal and is observed to varying degrees after chronic exposure to most drugs of abuse. Withdrawal from opioids in humans is particularly strong (described below). Studies in rodents have added significantly to our understanding of the neural and molecular mechanisms that underlie dependence. For example, signs of dependence, as well as analgesia and reward, are abolished in knockout mice lacking the μ-opioid receptor, but not in mice lacking other opioid receptors(δ, κ). Although activation of the μ-opioid receptor initially strongly inhibits adenylyl cyclase, this inhibition becomes weaker after several days of repeated exposure. 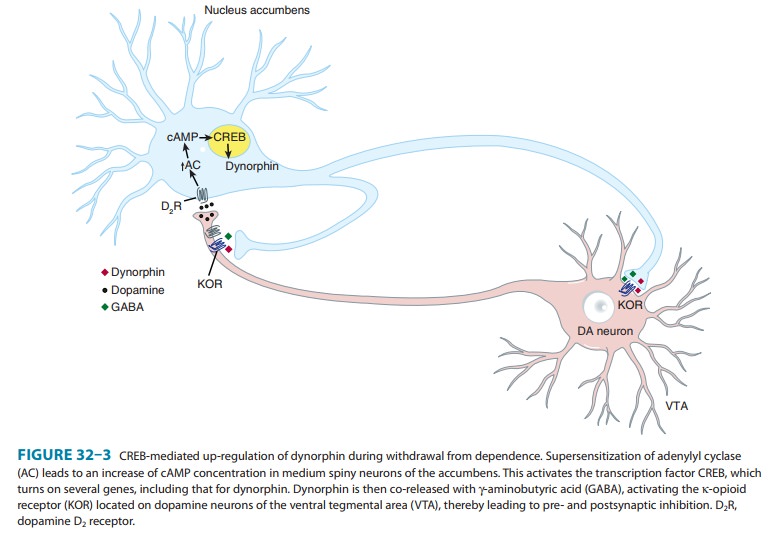 The reduction of the  inhibition of adenylyl cyclase is due to a counter-adaptation of the enzyme system during exposure to the drug, which results in over-production of cAMP during subsequent withdrawal. Several mechanisms exist for this adenylyl cyclase compensatory response, including up-regulation of transcription of the enzyme. Increased cAMP concentrations in turn strongly activate the transcription factor cyclic AMP response element binding protein (CREB), leading to the regulation of downstream genes. Of the few such genes identified to date, one of the most interesting is the gene for the endogenous κ-opioid ligand dynorphin. During withdrawal, neurons of the nucleus accumbens produce high levels of dynor-phin, which is then co-released with GABA onto the projection neurons of the VTA (Figure 32–3). These cells express κ-opioid receptors on their synaptic terminals and on the dendrites. As a consequence, they are inhibited and dopamine release is reduced. This mechanism exemplifies the adaptive processes engaged during dependence and may underlie the intense dysphoria typically observed during withdrawal.