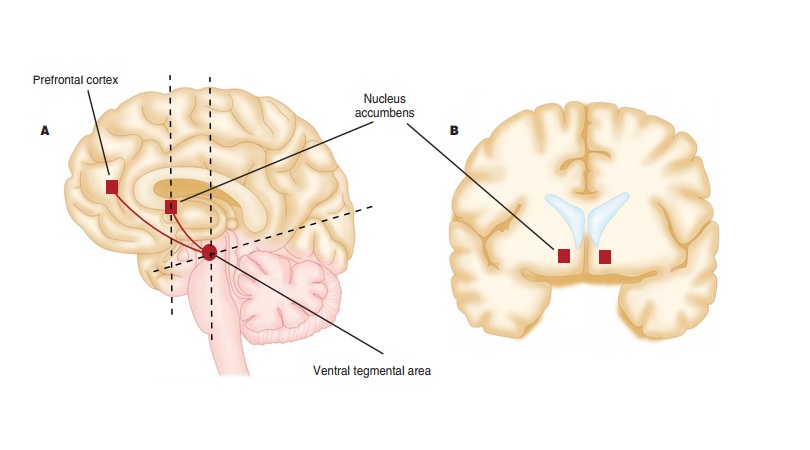 To understand the long-term changes induced by drugs of abuse, their initial molecular and cellular targets must be identified.

To understand the long-term changes induced by drugs of abuse, their initial molecular and cellular targets must be identified. A com-bination of approaches in animals and humans, including functional imaging, has revealed the mesolimbic dopamine system as the prime target of addictive drugs. This system originates in the ventral teg-mental area (VTA), a tiny structure at the tip of the brainstem, whichprojects to the nucleus accumbens,the amygdala, the hippocampus, and the prefrontal cortex (Figure 32–1). 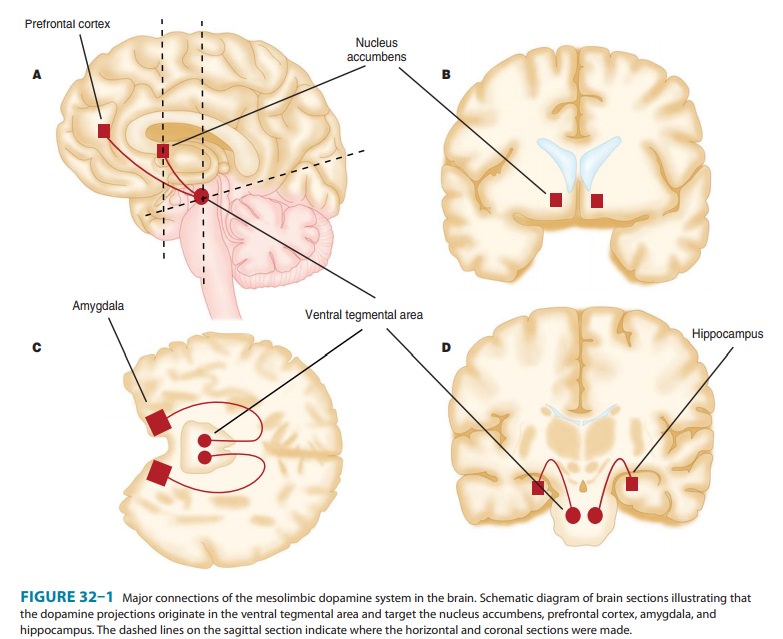 Most projection neurons of the VTA are dopamine-producing neurons. When the dopamine neurons of the VTA begin to fire in bursts, large quantities of dop-amine are released in the nucleus accumbens and the prefrontal cortex. Early animal studies pairing electrical stimulation of the VTA with operant responses (eg, lever pressing) that result in strong reinforcement established the central role of the mesolimbic dop-amine system in reward processing. Direct application of drugs into the VTA also acts as a strong reinforcer, and systemic administration of drugs of abuse causes release of dopamine. Even selective activa-tion of dopamine neurons is sufficient to elicit behavioral changes typically observed with addictive drugs. These very selective inter-ventions use optogenetic methods. Blue light is delivered in a freely moving mouse through light guides to activate channelrhodopsin, a light-gated cation channel that is artificially expressed in dopamine neurons.

As a general rule, all addictive drugs activate the mesolimbic dop-amine system. The behavioral significance of this increase of dop-amine is still debated. An appealing hypothesis is that mesolimbic dopamine codes for the difference between expected and actual reward and thus constitutes a strong learning signal (see Topic: The Dopamine Hypothesis of Addiction).

Since each addictive drug has a specific molecular target that engages distinct cellular mechanisms to activate the mesolimbic system, three classes can be distinguished: A first group binds to Gioprotein-coupled receptors, a second group interacts with ionotro-pic receptors or ion channels, and a third group targets the dop-amine transporter (Table 32–1 and Figure 32–2). G protein-coupledreceptors (GPCRs) of the Gio family inhibit neurons through post-synaptic hyperpolarization and presynaptic regulation of transmitter release. In the VTA, the action of these drugs is preferentially on the γ-aminobutyric acid (GABA) neurons that act as local inhibitoryinterneurons. Addictive drugs that bind to ionotropic receptors and ion channels can have combined effects on dopamine neurons and GABA neurons, eventually leading to enhanced release of dop-amine. Finally, addictive drugs that interfere with monoamine transporters block reuptake or stimulate nonvesicular release of dopamine, causing an accumulation of extracellular dopamine in target structures. Since neurons of the VTA also express somatoden-dritic transporters, which normally clear dopamine released by the dendrites, class III drugs also increase dopamine level in the VTA. Although drugs of this class also affect transporters of other mono-amines (norepinephrine, serotonin), action on the dopamine trans-porter remains central for addiction. This is consistent with the observations that antidepressants that block serotonin and norepi-nephrine uptake, but not dopamine uptake, do not cause addiction even after prolonged use. 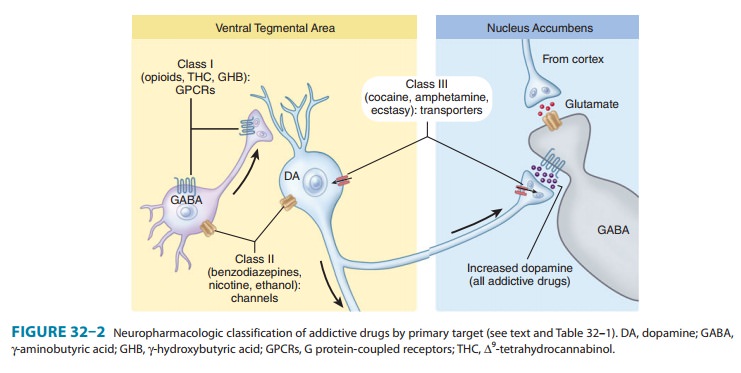