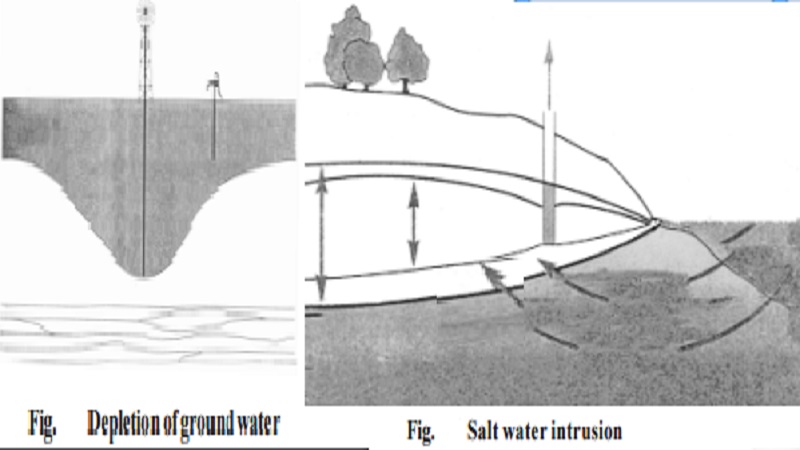 Of the total water available on earth, only 3% is fresh water.

1. Glaciers, ice and snow : Of the 3 percent of all water that is fresh, about three - fourths is tied up in glaciers, ice caps and snowfields. They occur only at high altitudes or high latitudes.

2. Ground water : After glaciers, the next largest reservoir of fresh water is held in the ground in ground water. Water held in the lower soil layers is known as water table. Porous- water bearing layers of sand, gravel and rock are called aquifers.

3.  Lakes and Ponds : Lakes are inland depressions that hold standing fresh water year around. Ponds are small temporary or permanent bodies of shallow water. While lakes contain nearly one hundred times as much water as all rivers and streams combined, they are still a minor component of total world water supply.

At least one billion people or nearly 20 percent of the world's population, lack safe drinking water. The W.H.O. considers 53,000 gallons of good water per year to be the minimum for a healthful life. Some forty countries (including island nations, Middle East countries) in the world fall below this level.

Ground water is the source of nearly 40 % water for agricultural and domestic use in most of the countries. Nearly 95% of rural population depends on groundwater for drinking and other domestic purposes. Over

use of the supplies causes several kinds of problems, including drying of wells, natural springs and disappearance of surface water features such as wetlands, rivers and lakes.

In many parts of the world, groundwater is being withdrawn from aquifers faster than natural recharge can replace it. On a local level this causes a level of depression in the water table. A heavily pumped well can lower the ground water table so that nearby shallower wells go dry. On a broader scale, heavy pumping can deplete a whole aquifer. Many aquifers have slow recharge rates, so it will take thousands of years to refill them once they were emptied.

Many parts of the world are losing freshwater sources due to saltwater intrusion. Over use of under ground freshwater reservoirs often allows salt water to intrude into aquifers and affect the water table.

Loss of free flowing rivers that are either drowned by reservoir impoundments or turned into linear, sterile irrigation channels is yet another cause for freshwater crisis.

It happens in freshwater lakes, ponds and dams.