We have learnt in earlier classes, on how all beautiful things in nature as well as man made things are connected with Mathematics. Now, we just refresh everyone’s memory and show how Math can be beautiful when seen in physical and biological things everywhere around us.

Fibonacci (real name Leonardo Bonacci) was an Italian mathematician who developed the Fibonacci Sequence. Remember the pattern of the Fibonacci sequence we already studied in standard VI it looks like this: 1, 1, 2, 3, 5, 8, 13, 21, 34... and it goes on.

Let us tabulate the Fibonacci sequence and find a rule.

We observe that the 3rd term of the Fibonacci sequence is the sum of 2nd term and the 1st term.

where F(n) is the nth term

F(n–1) is the previous term to the nth term

This is how the Fibonacci Sequence is obtained. Let us learn more from the following real life examples.

Let us look at the family tree of a male drone bee and a female bee as shown Fig 7.19.

Here, female bees have 2 parents, male (drone) bees have just one parent, a female. (Male bee (drone) are produced by the queen’s unfertilized eggs, so male(drone) bees only have a mother but no father!) 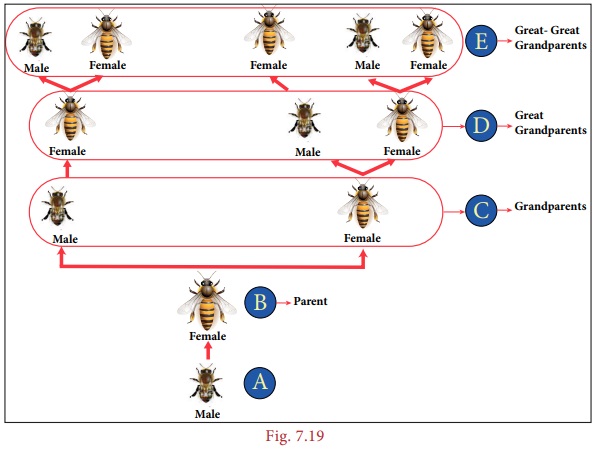 From the picture the following points are noted:

has 1 parent, a female

, since his mother had parents

: since his grandmother has two parents but his grandfather has only one.

Now, answer, how many great-great-grandparents did the male

Let us try to find the relationship among the pattern of bees family by representing in the tabular form given below,

The below picture clearly forms the sequence is 1,1,2,3,5,8... Here, we find the pattern in which each number is in the Fibonacci sequence, obtained by adding together with previous two. Going on like this to find subsequent numbers at the twelfth month, we will get 144 pairs of rabbits. In the other words, twelfth Fibonacci number is 144. 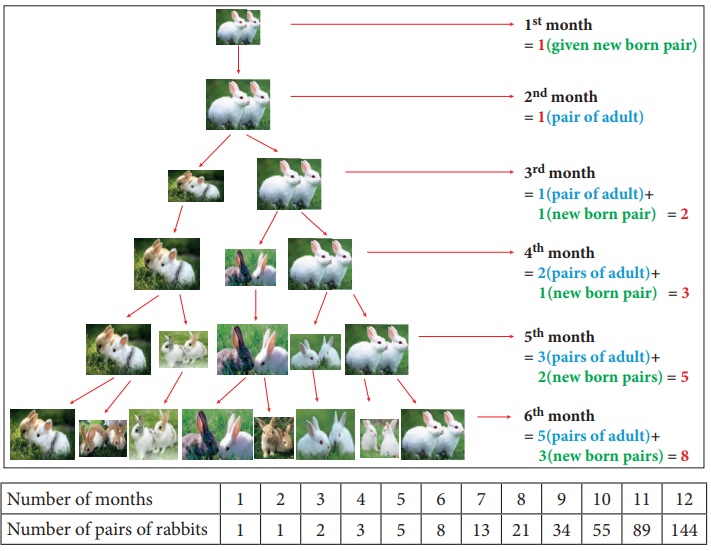 1. Where are the even Fibonacci Numbers? Colour both the term n and where F(n) is even in yellow. Do you find any pattern? Every Third Fibonacci number is a multiple of 2(even).

Write down the pattern you find

Every 4th Fibonacci number is a multiple of 3.

3. What about the multiple of 5? Colour both the term n and where F(n) is multiple of 5 in blue. Write down the pattern you find.

4. What about the multiple of 8? Colour both the term n where F(n) is multiple of 8 in green. Write down the pattern you find.

From the above activity, we conclude that

From the above table, we get a general rule as Every kth Fibonacci number is a multiple of F(k).