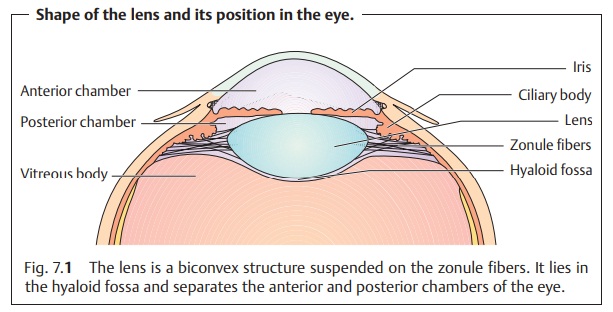 Function of the lens: The lens is one of the essential refractive media of theeye and focuses incident rays of light on the retina.

Function of the lens:

The lens is one of the essential refractive media of theeye and focuses incident rays of light on the retina. It adds a variable element to the eye’s total refractive power (10 – 20 diopters, depending on individual accommodation) to the fixed refractive power of the cornea (approximately 43 diopters).

The lens is approximately 4 mm thick, and its weight increases withage to five times its weight at birth. An adult lens weighs about 220 mg.

The lens lies in the posterior chamber of the eyebetween the posterior surface of the iris and the vitreous body in a saucer-shaped depression of the vitreous body known as the hyaloid fossa. Togetherwith the iris it forms an optical diaphragm that separates the anterior and posterior chambers of the eye. Radially arranged zonule fibers that insert into the lens around its equator connect the lens to the ciliary body. These fibers hold the lens in position (Fig. 7.1) and transfer the tensile force of the ciliary muscle (see Accommodation). 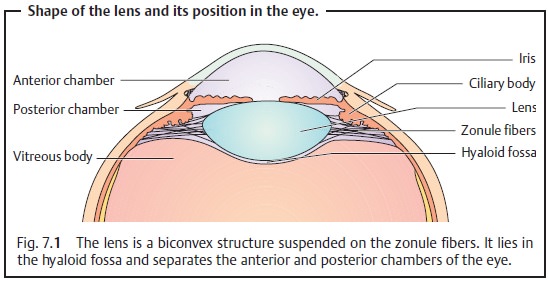 The lens is apurely epithelial structurewithoutany nerves or blood vessels. It moves into its intraocular position in the first month of fetal development as surface ectoderm invaginates into the primi-tive optic vesicle, which consists of neuroectoderm. A purely ectodermal struc-ture, the lens differentiates during gestation into central geometric lensfibers, an anterior layer of epithelial cells, and an acellular hyaline capsule (Figs. 7.2a and b). The normal direction of growth of epithelial structures is centrifugal; fully developed epithelial cells migrate to the surface and are peeled off. However, the lens grows in the opposite direction. The youngest cells are always on the surface and the oldest cells in the center of the lens. The growth of primary lens fibers forms the embryonic nucleus. At the equa-tor, the epithelial cells further differentiate into lens fiber cells (Fig. 7.2). 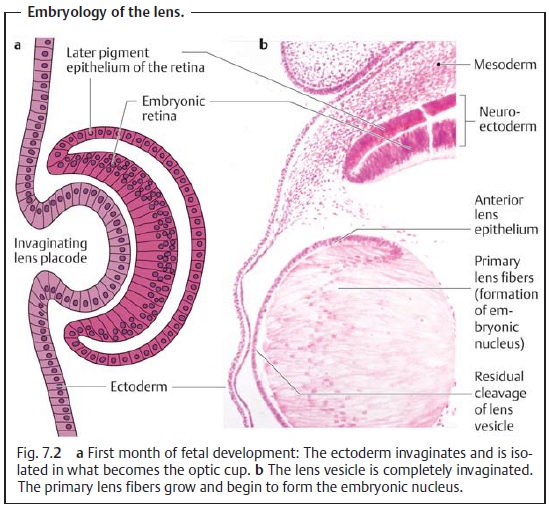 These new secondary fibers displace the primary fibers toward the center of the lens. Formation of a fetal nucleus that encloses the embryonic nucleus is complete at birth. Fiber formation at the equator, which continues through-out life, produces the infantile nucleus during the first and second decades of life, and the adult nucleus during the third decade. Completely enclosed by the lens capsule, the lens never loses any cells so that its tissue is continuously compressed throughout life (Fig. 7.3a and b). The various density zones created as the lens develops are readily discernible as discontinuity zones (Fig. 7.4). 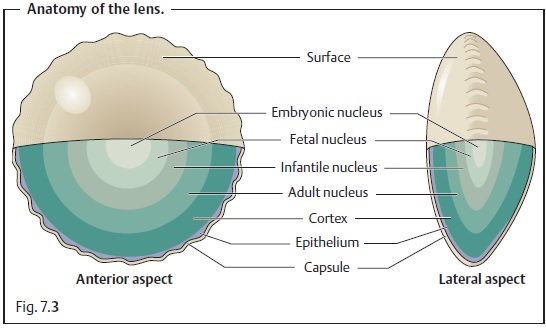 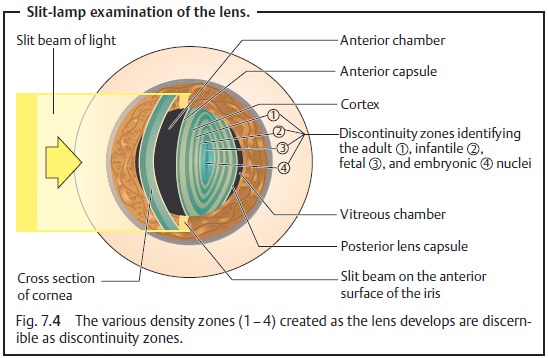 Metabolism and aging of the lens:

The lens is nourished bydiffusion fromthe aqueous humor. In this respect it resembles a tissue culture, with theaqueous humor as its substrate and the eyeball as the container that provides a constant temperature.

The metabolism and detailed biochemical processes involved in aging are complex and not completely understood. Because of this, it has not been possible to influence cataract development with medications.

The metabolism and growth of the lens cells are self-regulating. Metabolic activity is essential for the preservation of the integrity, transparency, and optical function of the lens. The epithelium of the lens helps to maintain the ion equilibrium and permit transportation of nutrients, minerals, and waterinto the lens. This type of transportation, referred to as a “pump-leak sys-tem,” permits active transfer of sodium, potassium, calcium, and amino acids from the aqueous humor into the lens as well as passive diffusion through the posterior lens capsule.

Maintaining this equilibrium (homeostasis) is essen-tial for the transparency of the lens and is closely related to the water balance. The water content of the lens is normally stable and in equilibrium with the surrounding aqueous humor. The water content of the lens decreases with age, whereas the content of insoluble lens proteins (albuminoid) increases. The lens becomes harder, less elastic (see Loss of accommodation), and less transparent. A decrease in the transparency of the lens with age is as unavoidable as wrinkles in the skin or gray hair. Manifestly reduced trans-parency is present in 95% of all persons over the age of 65, although individual exceptions are not uncommon. The central portion or nucleus of the lens becomes sclerosed and slightly yellowish with age.