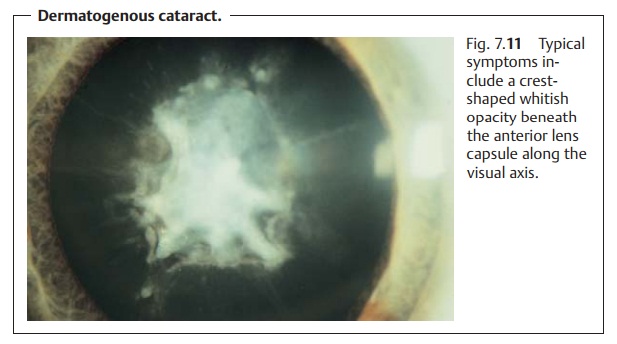 Epidemiology.Lens opacities can occasionally occur as a sign of systemic disease.

Lens opacities can occasionally occur as a sign of systemic dis-ease.

Forms of cataracts in systemic disease:

Galactosemic cataract.Thisdeep posterior cortical opacitybegins after birth.Galactosemia is a rare cause of early cataract in children lacking an enzyme required to metabolize galactose. The newborn receives ample amounts of galactose in the mother’s milk. Due a lack of uridyl transferase, or less frequently galactokinase, galactose cannot be metabolized to glucose, and the body becomes inundated with galactose or with galactose and galactose-1-phosphate. If the disorder is diagnosed promptly and the child is maintained on a galactose-free diet, the opacities of the first few weeks of life will be reversible.

Galactosemic cataract is the only form of cataract that responds to con-servative therapy.

Dialysis cataract.Hemodialysis to eliminate metabolic acidosis in renalinsufficiency can disturb the osmotic equilibrium of lens metabolism and cause swelling of the cortex of the lens.

Cataract with myotonic dystrophy.Opacities first occur between the ages of30 and 50, initially in a thin layer of the anterior cortex and later also in the

subcapsular posterior cortex in the form of rosettes. Detecting these opacities is important for differential diagnosis as cataracts do not occur in Thomsen’s disease (myotonia congenita) or Erb’s progressive muscular dystrophy.

Symptoms that confirm the diagnosis include cataract, active signs of myo-tonia (delayed opening of the fist), and passive signs of myotonia (decreased relaxation of muscles in the extremities following direct percussion of the muscle and absence of reflexes).

Tetany cataract.The opacity lies within a broad zone inferior to the anteriorlens capsule and consists of a series of gray punctate lesions. Symptoms that confirm the diagnosis include low blood calcium levels, a positive hyperventi-lation test, and signs of tetany: positive Chvostek, Trousseau, and Erb signs. 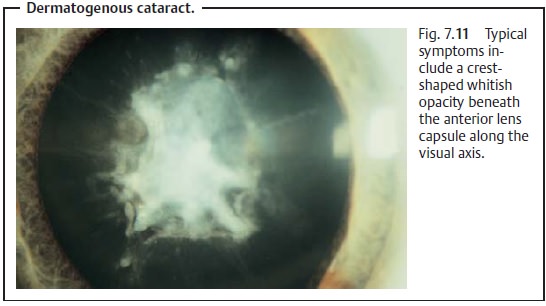 Dermatogenous cataract.This may occur with chronic neurodermatitis, lessfrequently with other skin disorders such as scleroderma, poikiloderma, and chromic eczema. Characteristic signs include an anterior crest-shaped thickening of the protruding center of the capsule (Fig. 7.11).