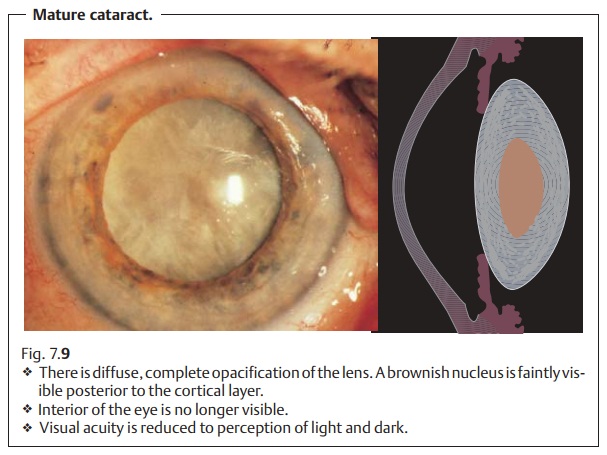 Senile cataract is by far the most frequent form of cataract,accounting for 90% of all cataracts. About 5% of all 70-year-olds and 10% of all 80-year-olds suffer from a cataract requiring surgery.

Senile cataract is by far the most frequent form of cataract,accounting for 90% of all cataracts. About 5% of all 70-year-olds and 10% of all 80-year-olds suffer from a cataract requiring surgery.

Ninety percent of all cataracts are senile cataracts.

The precise causes of senile cataract have not been identified. Asoccurrence is often familial, it is important to obtain a detailed family history.

Classification and forms of senile cataracts:

The classification according tomaturity (Table 7.2) follows the degree of visual impairment and the matur-ity, which earlier was important to determine the time of surgery. We follow a morphologic classification as morphologic aspects such as the hardness andthickness of the nucleus now influence the surgical procedure (Table 7.3): 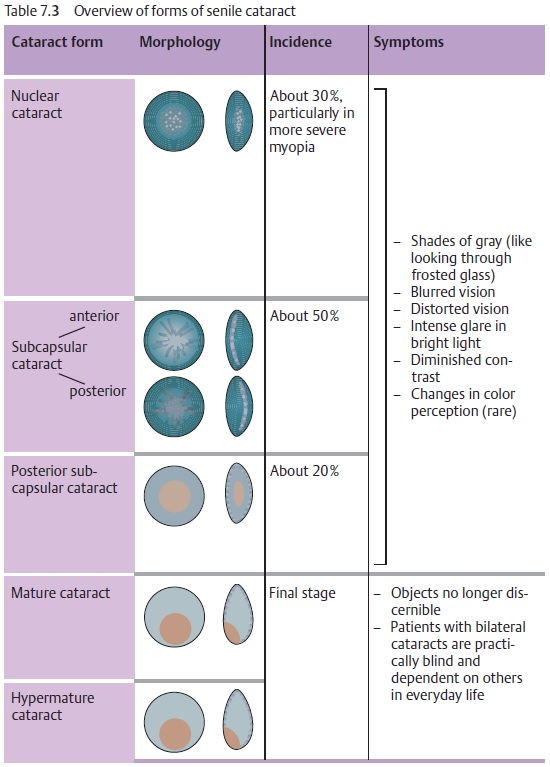 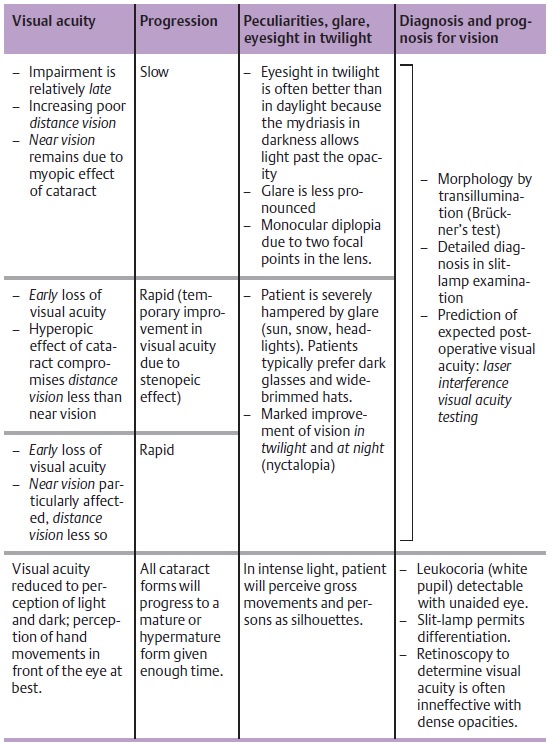 Nuclear cataract.In the fourth decade of life, the pressure of peripheral lensfiber production causes hardening of the entire lens, especially the nucleus. The nucleus takes on a yellowish brown color (brunescent nuclear cataract). This may range from reddish brown to nearly black discoloration of the entire lens (black cataract). Because they increase the refractive power of the lens, nuclear cataracts lead to lenticular myopia and occasionally produce a second focal point in the lens with resulting monocular diplopia (Fig. 7.8). 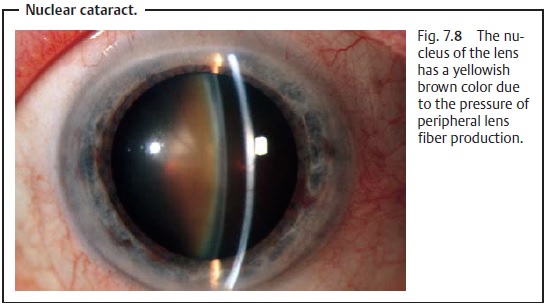 Nuclear cataracts develop very slowly. Due to the lenticular myopia, near vision (even without eyeglasses) remains good for a long time.

Whereas changes in nuclear cataracts are due to hardening, cortical changes are characterized by increased water content. Several morphologic changes will be apparent upon slit-lamp examination with maximum mydri-asis:

❖ Vacuoles: Fluid accumulations will be present in the form of small narrowcortical vesicles. The vacuoles remain small and increase in number.

❖ Cuneiform cataract: This is a frequent finding in which the opacitiesradiate from the periphery of the lens like spokes of a wheel.

Cortical cataracts progress more rapidly than nuclear cataracts. Visual acuity may temporarily improve during the course of the disease. This is due to a stenopeic effect as light passes through a clear area between two radial opacities.

Posterior subcapsular cataract.This is aspecial form of cortical cataractthatbegins in the visual axis. Beginning as a small cluster of granular opacities, this form of cataract expands peripherally in a disk-like pattern. As opacity increases, the rest of the cortex and the nucleus become involved (the usual spectrum of senile cataract).

Mature cataract. The lens is diffusely white due tocomplete opacification ofthe cortex. A yellow lens nucleus is often faintly discernible (Fig. 7.9). Wherewater content is increased, a lens with a mature cataract can swell and acquire a silky luster (intumescent cataract in which the capsule is under pressure). The increasing thickness of the lens increases the resistance of the pupil and with it the risk of angle closure glaucoma. 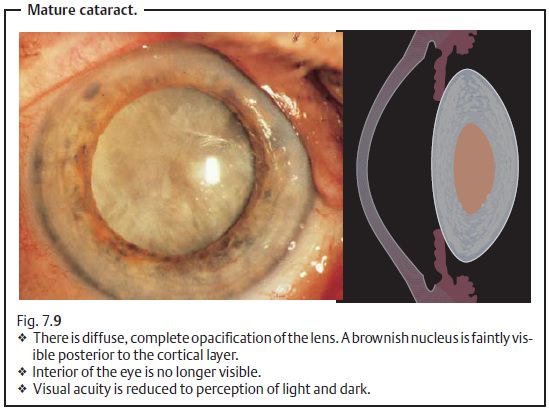 Vision is reduced to perception of light and dark, and the interior of the eye is no longer visible. Cataract surgery is indicated to restore visual acuity.

Hypermature cataract.If a mature cataract progresses to the point ofcomplete liquification of the cortex, the dense brown nucleus will subside within the capsule. Its superior margin will then be visible in the pupil as a dark brown silhouette against the surrounding grayish white cortex. The pressure in the lens capsule decreases. The contents of the limp and wrinkled capsular bag gravitate within the capsule. This condition, referred to as Morgagni’s cataract, is the final stage in a cataract that has usually developedover the course of two decades. The approximate onset of the cataract can usually be inferred from such findings (Figs. 7.10a and b). 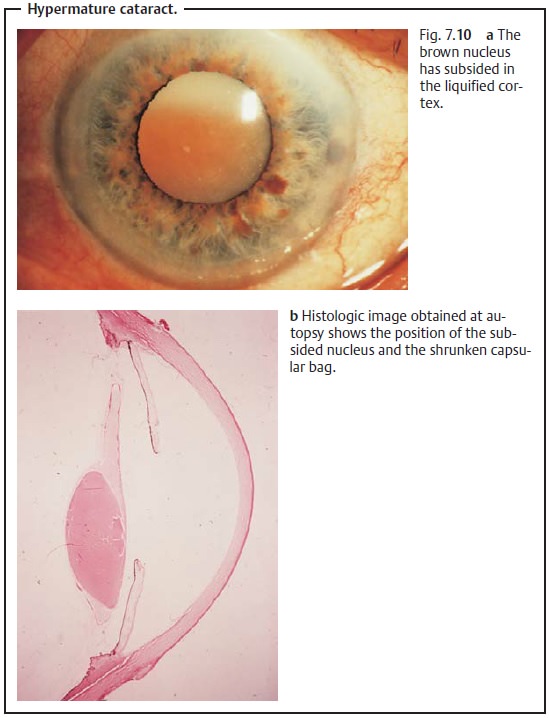 When the lens capsule becomes permeable for liquified lens substances, it will lose volume due to leakage. The capsule will become wrinkled. The escaping lens proteins will cause intraocular irritation and attract macro-phages that then cause congestion of the trabecular network (phacolytic glau-coma: see Secondary open angle glaucoma).

Emergency extraction of the hypermature cataract is indicated in pha-colytic glaucoma to save the eye.