a. The Mississippi and Missouri rivers

[Answer : (a) The Mississippi and Missouri rivers]

1. Death valley is 86m below the sea level is the lowest part of the continent of North America.

2. Grand Bank is one of the world's best fishing grounds.

3. The highest peak in the Andes is Mt Aconcagua on the Chile - Argentina border.

4. The Selvas of the equatorial regions are called the “lungs of the world”.

5. Brazil is also known as the “coffee pot” of the world.

Answer: The South and east is usually warm all the year round and the regions around the mouth of the Mississippi-Missouri and the Gulf Coast have summer rain from the North East Trades which blow on-shore in summer.

2. United States of America is known as “Melting Pot”.

Answer:  United States of America is known as “Melting Pot” where hundreds of different cultures meet, blend and creating a new culture.

3. Though Quito and Amazon basin are in the same latitude Quito enjoys eternal Spring. Whereas Amazon basin is hot.

(i) The climate of the continent of South America has been closely influenced by the latitudes, attitudes and the proximity of the Pacific and Atlantic Oceans.

(ii) It is hot in the Amazon basin as the equator passes through it whereas Quito, situated almost on the same latitude on the Andes, has “Eternal Spring”.

(iii) That is, it has a pleasant climate throughout the year because of its high attitude at 9,350 feet or 2849.88 meter above the sea level.

4. Peru is one of the world’s largest producers of tropical fish.

(i) Peru is one of the worlds largest producers of tropical fish. Here the cool Humboldt Current helps in bring plankton, which is the main food for fishes.

(ii) Commercial deep sea fishing off of Peru’s coastal belt of over 3000 km.

(v) There are over 40 fishing ports on the Peruvian coast.

(vi) Paita and Callao are being the most important centers in Peru.

1. The Rocky mountain and the Appalachian mountain.

1. The western part of North America is occupied by long ranges of young fold mountains known as Rocky mountains.

3. The Rocky mountains are west of the Mississippi River.

1. The eastern part of North America is formed of old fold Appalachian which are not continuous like Rockies.

3. The Appalachian Mountains are east of the river.

2. The Prairies and the Pampas grassland.

1. The temperate grasslands of North America are known as Prairies.

3. Winter is very cold, Summer is hot and rainfall is moderate.

1. The temperate grasslands of South America are known as Pampas.

2. Region - North of Eastern part of Argentina, Uruguay and Southern most Brazil.

3. Summer is quite warm and winter is cold and moderate rainfall.

2. Climate - Winter is long and severely cold, Summer is short and cool. Rainfall is scanty.

1. Region - The coniferous forests are found in Alaska and North Eastern Canada.

VI. Put (√) for the correct option

1. Assertion (A): Cotton grows well in southern and western states of North America.

a. Both A and R is correct.

b. A is correct and R is wrong.

d. Both A and R is wrong

2. Assertion (A): Industries in the South America has developed rapidly.

a. Both A and R are correct.

b. A is correct and R is wrong.

d. Both A and R are wrong

1. Name the boundaries of North America.

(ii) The North America is joined with the South America by the Isthmus of Panama.

2. Write a note on Mackenzie River.

Answer: The Mackenzie River is the second largest drainage basin of North America. It has it source from Great Slave Lake and drains into Arctic Ocean.

3. What type of fruits are cultivated in North America? Name some of them.

(ii) The important Fruits of North America are Cranberries, Blueberries, Concord Grapes, Strawberries, Gooseberries and the other fruits.

4. Give a short note about the lifestyle of an Eskimos.

(i) Eskimos live in the very cold and inhospitable region where plenty of fish varieties are available.

(ii) They were able to dress themselves in thick warm clothes made of fur, they live in igloos.

(iii) Their lives were very simple and they could not alter the environment to any extent.

(iv) They specially designed a house by ice and is known as igloos.

5. Which are the densely populated areas of North America?

On the basis of topographical features, the continent may be divided into the following physiographic divisions:

(i) The Andes Mountains

In equatorial regions convectional rain occurs almost daily in the afternoons. It generally occurs at 4pm that’s why it is known as 4’ o Clock Rain.

8. Name the flora and fauna of equatorial forest in South America.

The Breeds raised on large pasture lands is known as Estancias. These are divided into several paddocks. Besides this, there are small yards known as corrals where animals are sorted and branded. The owner is the Estanciera who has a number of gauchos.

VIII. Answer the following in a paragraph

1. Give an account of the climate of North America.

(i) The vast latitudinal extent from the Tropics to the Polar Regions makes the climate of North America as varied as that of Asia.

(ii) Unlike the Himalayas, the Rockies run north to south which do not form climatic barrier and do not prevent the icy winds from the Arctic region and penetrating the central plains which therefore have a very long cold winter and very short hot summer.

(iv) The Arctic region is cold and mostly dry and has a very short summers and a very long bitterly cold winter.

(v) As one proceeds southwards the short summers become warm but the winters are very cold.

(vi) The central plains have extreme climate from freezing conditions in winter to tropical heat in summer.

(vii) The South is usually warm all the year round and the regions around the mouth of the Mississippi-Missouri and the Gulf Coast have summer rain from the North East Trades which blow on-shore in summer.

(viii) The warm moist South Westerlies not only bring rainfall to the North West coast and also keep it warm.

(x) The State of California in USA has a Mediterranean Climate with moist winter and dry summers.

(ii) These industries depend heavily on the Iron and Steel industry.

(iv) USA is the largest producer of automobiles.

Answer: (i) Owing to the position of the Andes all the great rivers of the continent drain into the Atlantic.

(ii) The Pacific streams are short and swift but along the coastlands of Peru their waters are used for irrigation and to some extent for hydro-electric power. Amazon is the longest river of South America (6,450km) and is the largest river system in the world.

(iii) This river has over a thousand of tributaries.

(v) At the point where it enters the sea the river is so wide and powerful that it flows even at a distance of 80 km into the high seas.

(vi) The Orinoco River originates in the Guiana Highlands and flows northwards into the Caribbean Sea.

(vii) The river Paraguay has the Parana and Uruguay rivers as the main tributaries which together form and known as the Platte River system.

(viii) All the rivers are navigable for quite some distance in the interior.

4. Write briefly about the major races in South America.

(i) South America contains the world’s most mixed population.

(ii) Many people in South America are descended from European, especially the Spanish and Portuguese, who begin to arrive during the 15th century.

(iii) The descendants of African slaves brought over by the Europeans. Native people still live in the mountain and the rainforests and keeping their own languages and traditions.

(iv) There are three major races found in South America and are (i) American Indian, (ii) European and (iii) Blacks. The mixed population of Native Indians and Europeans is known as ‘Mestizo’.

(vii) South America is positioned 5th rank in total population among the continents.

1. With the help of the map given in the text and an atlas, name the seas and bays in North America. 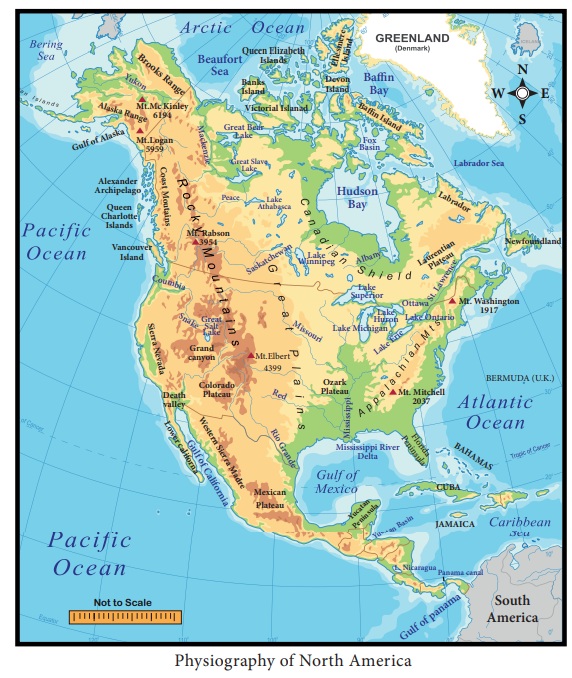 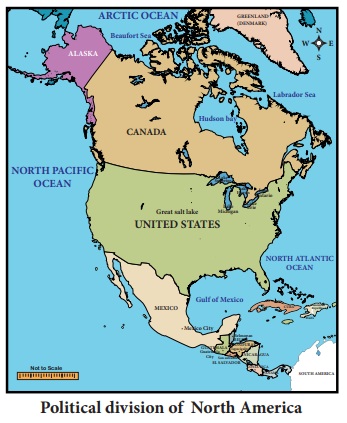 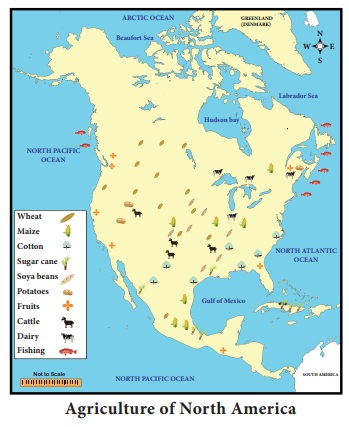 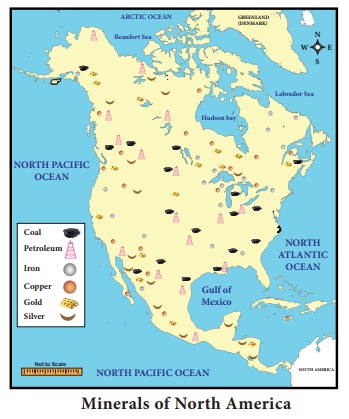 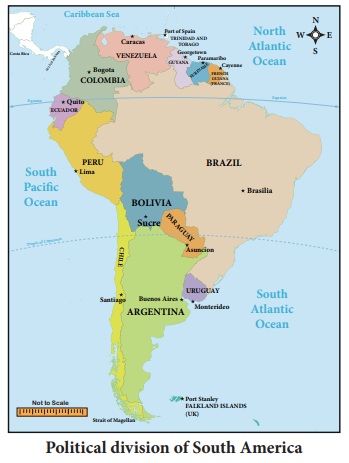 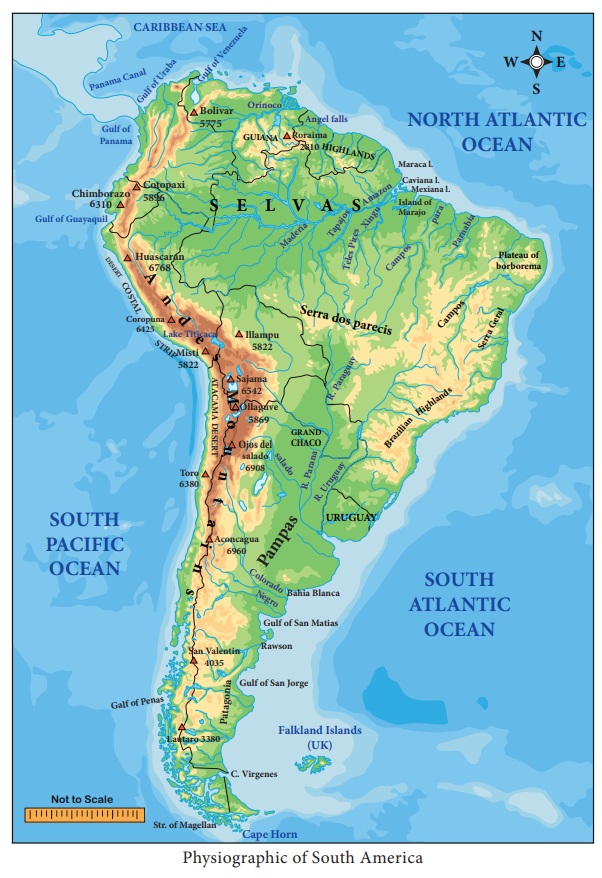 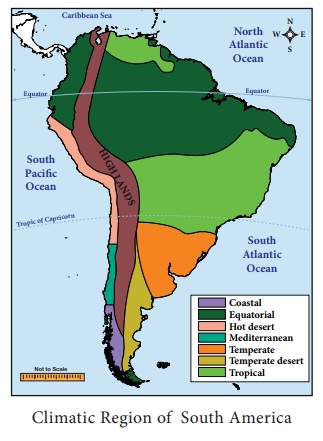 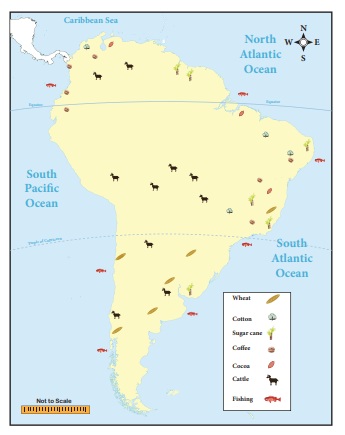 1. Given below are some important cities with industries placed in brackets. Pick out the correct answer from them.

2. Write down the answers to the question given in blocks:

a. Name the highest peak in South America.

b. An active volcano in South America.

d. The highest falls in the world.

e. The largest river in the world.