• To know about the maps and scale

• To identify the various types of maps

• To understand the elements of maps

• To learn the legend and signs and symbols

Reading of maps will give clear understanding of geographical location, physiographic features like mountains, plateaus and plains, water features – river, lake, ocean etc., and cultural features, such as roads, settlement etc.,  The maps are meant to be the preserving records of the past which will helps us to understand the past and perceive the future. Maps portraits political  boundaries of different countries and states. It helps the students to visually understand the size and shape of various countries, continents etc., Maps clearly refer to the properties that people own and the geographical boundaries.

A map is an essential tool of a geographer. Map is a representation of the earth as a whole or a part of the earth drawn on a flat surface according to a given scale. It can show continents, countries, cities and even a local area are drawn with specific details. It is easy to handle and carry as it can be rolled up (or) folded and stored in computers.

In the early times, various materials such as animal skin,cloth,parchment,papyrus,wet earth and clay tablets wereused to make maps.

As each map is unique in its design, content and construction. On the basis of certain common features maps can be classified into several types.

Maps on the basis of scale:

Large scale maps show small areas in greater details because they are drawn on a relatively large scale.

* Topographical maps shows smaller areas in much greater details about small area. These maps are prepared by Survey of India. These are also large scale maps which show both natural features like hills and valleys as well as man-made features like buildings, road and canals.

Small scale maps that show large areas like continent or countries. These maps are drawn on 1cm = 1000 kms. These are called small-scale maps.

* Wall maps are small-scale maps showing large areas. They are useful for students in classrooms and offices, small scale maps covers a larger area and depicts with limited information.

* Atlas is a collection of maps in a book. Atlas maps are small-scale maps covering large areas like continents and countries. Only prominent relief features, main roads and railways important towns are shown in Atlas maps. The study of geographic characteristics of a large area is possible at the time with the help of an atlas.

The science of map-making is called cartography (cartemeans ‘map’ and graphic means ‘drawing’).One whodraws maps is called a Cartographer.

* Advanced Atlas contains detailed maps of even small regions of the continents and are used as reference atlases.

* National Atlas contains detailed maps of a country. The maps of a national atlas are comparatively large-sized and they depict general and characteristic features of the geography of a country.

* Climatic maps show the distribution of temperature, rainfall, clouds, relative humidity, direction and velocity of winds and other elements of weather.

* Soil maps which are drawn to show the distribution of different types of soil and their properties.

* Economic maps depict the production and distribution of different types of crops and minerals, location of industries, trade routes and flow of commodities.

* Thematic maps represent the distribution of a particular feature or theme and its spatial variation.

Digital maps is a web-based service that provides detailed information about geographical regions and sites around theworld.

Maps provide us with a lot of information and one must know how to read and interpret them. Every map is provided with certain features that help us to study the information presented in it. The basic essential elements of a map are title, direction, scale and legend (or) key and signs and symbols.

Every map has a title that describes the information given in the map. For example, a map with the title India Rivers shows Rivers of India.

In general maps are drawn with North orientation. It helps us to find other direction on the map like East, West and South. In addition to the North notation, latitudes and longitudes are depicted in the margins. The North is notified by letter ‘N’ with an arrow mark. 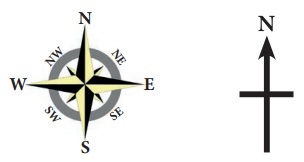 A legend or key of a map explains the symbols that are used on it to represent various physical and cultural features. The common signs and symbols which are internationally accepted and used in maps are called conventional signs and symbols. Every map has a legend or a key which explains the different colours and symbols used in it. On a map it is difficult to show the real shape such as settlements, bridges, post offices, railway lines and forests They are depicted by using certain colours, symbols or letters. 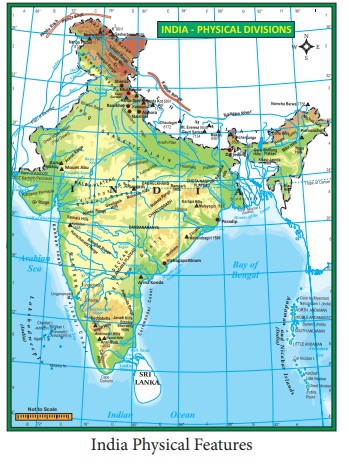 A sign is a widely used symbol or a line pattern or a colour on a map. It represents a feature on the ground. The Survey of India (SOI) have standardized a set of convectional signs and symbols. Several colours are commonly used in the map.

1. Maps enable us to know details of the landforms.

3. It is used in the aero planes and ships.

4. Maps are used for weather forecasting.

Comparison of Map and Globe

1. A map is a two – dimensional form of the Earth.

3. A map can show a detailed information about an area.

4. A map is very easy to carry

1. A globe is three –dimensional model of the Earth.

2. A globe is a true model of the earth

3. A globe cannot show the detailed information for an area.

* Map is a representation of the Earth as a whole (or) a part of the earth drawn on a flat surface according to given scale.

* The basis essential elements of a map are title, direction, scale and legend (or) key or symbol.

* The cardinal direction are North, South, East and West.

* The scale of a map is the ratio between the distance on the map between two points.

* The Survey of India (SOI) have standardized a set of conventional signs and symbols.

1. Map Representation of Earth on a flat surface நிலவரைபடம்

2. Scale Ratio between the Actual distance of two points  on the earth and the distance on a map  அளவை

3. Legend It is a representation of different geographical features by using different colours and symbols  குறி விளக்கம்

7. Thematic map Represent the distribution of a particular feature. ககருததுப்டம்