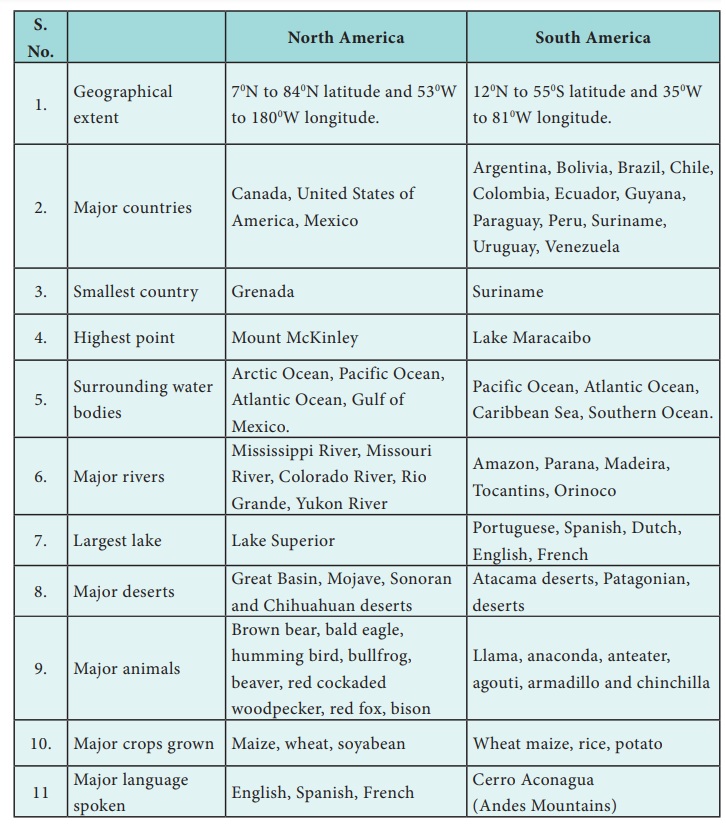 * North America is the third largest continent next to Asia and Africa.It is divided into four physical divisions.

* The vast latitudinal extent from the tropics to the Polar Regions makes the climate of North America as varied as that of Asia.

* North America is endowed with a diverse and extensive forest cover. Approximately 30 percentage of the total land area is under forest cover.

* Wheat, Corn (Maize), Oats, Soybean, Barley and many other food crops are grown throughout the vast interior plains of North America.

* United States of America is known as “Melting Pot” where hundreds of different cultures meet, blend and creating a new culture.

* Next to Asia, Africa and North America South America is the fourth largest country in the World. It is divided into three physical divisions.

* The climate of the continent of South America has been closely influenced by the latitudes, and the proximity of the Pacific and Atlantic Oceans.

* There are four main natural vegetation areas of South America and are the Amazon basin (the Selvas), the Eastern Highlands, the Gran Chaco and the slopes of the Andes.

* Portuguese and Spanish are the primary languages of the South America.

5. Igloos The specially designed a house by ice இக்லூ (எஸ்கிமமோக்களின்வீடு)

6. The Pacific Ring of Fire These places are subject to great volcanic eruption and earthquake activities  பசிபிக் நெருப்பு வெளையம

7. Selvas A tract of land covered by dense equatorial forest in the Amazon basin.