Basic Radiology : Radiology of the Breast : THE SYMPTOMATIC PATIENT

5-5.   The most likely explanation for the patient’s symptoms and mammographic change in Case 5-5 (Figure 5-12) is 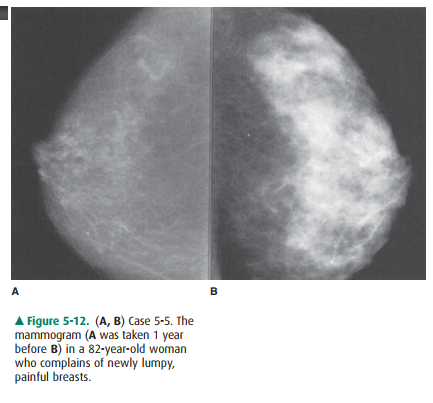 5-6. With respect to ductography and the condition of the patient in Case 5-6 (Figure 5-13), which of the fol-lowing statements is true? 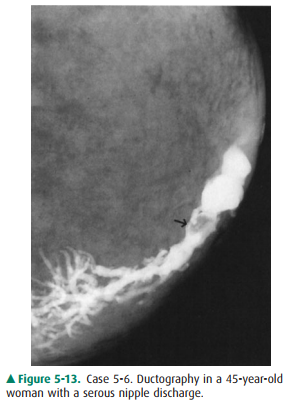 A.   Ductography should be performed in all patients with nipple discharge.

B.   The cause for this patient’s discharge is more likely to be malignant than benign.

D.   Ductography has a high specificity for malignant lesions.

E.   Ductography is helpful in guiding the surgeon’s approach. 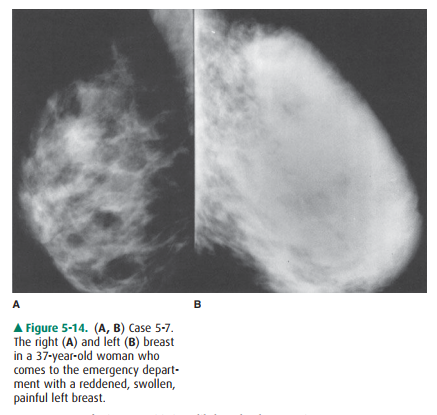 B.         Inflammatory carcinoma is high on the differen-tial diagnostic list.

C.         Infectious mastitis is unlikely to be the cause in this nonlactating patient.

D.         The mammographic appearance is nonspecific.

E.         Follow-up imaging after a course of antibiotics would be appropriate. 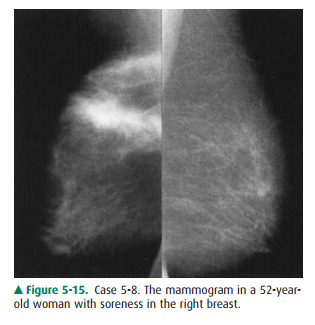 A.   The soreness indicates a benign process.

B.   The appearance is malignant, and biopsy is necessary.

C.   Findings on physical examination and history may radically alter our management decision.

D.   Bleeding, such as that due to anticoagulation therapy, would not have this appearance.

E.   The most likely diagnosis is fibrocystic change.

5-5. These mammograms show a diffuse marked increase in mammographic density with a nodular character (A is the correct answer to Question 5-5).

5-6. In this ductogram, contrast has been injected into a portion of a single ductal system with opacification of the lactiferous sinus and larger branching ducts. Most of the walls are smooth, as they should be. However, there is a filling defect in one of the major branches, as exhibited by the lucency outlined by contrast on all sides and indicated by the arrow (E is the correct answer to Question 5-6; Statement C is false).

5-7. Mammograms of the right and left breast show that the entire left breast (B) is abnormally dense (C is the correct answer to Question 5-7).

5-8. Mammogram shows a large band of high density with markedly spiculated margins in the upper part of the breast (C is the correct answer to Question 5-8).

Lumpy breasts are a variant of normal and, as such, require careful physical examination and mammography to avoid unnecessary surgery, as well as not to miss a carcinoma. Dif-fuse lumpiness is not a contraindication to screening mam-mography, but when a particular lump becomes dominant, a diagnostic study is indicated.

The two mammograms of the patient in Figure 5-12 were obtained 1 year apart. Between these two examinations, the patient began to exhibit menopause symptoms and was started on hormonal replacement therapy. The breasts, which were previously largely fatty (A), have become moderately dense and very lumpy on palpation 1 year later (B). This change can also be seen, although not usually as dramatically, in the perimenopausal time of estrogen flare.

Such changes can be seen asymmetrically or unilaterally, and it is useful to remember the estrogen effect when evalu-ating mammograms with interval changes. Correlation with clinical history is then needed.

Answer B, infectious mastitis, and Answer C, carcinoma, are incorrect as both of these entities are usually unilateral and focal. Option D, congestive heart failure (CHF), is incor-rect because CHF causes bilateral changes that have a more linear pattern of trabecular thickening on mammography, rather than the patchy, ill-defined nodular pattern character-istic of glandular and cystic densities seen here. Answer E, cystic disease, is incorrect. Cysts are seen as a component of hormone-related breast changes, but spontaneous cystic dis-ease alone is rare at this age.

In the patient in Case 5-6, there is a single intraluminal filling defect on ductography. However, we cannot determine from these findings alone whether the defect is due to a be-nign or a malignant nodule (Statement D is false), although approximately 90% of nipple discharges are due to benign causes (Statement B is false). The filling defect in this woman was a benign papilloma, the most common cause of bloody or serous discharge. Mammograms usually do not show these small, intraductal nodules.

Whether or not a filling defect is seen on a ductogram, biopsy is needed to rule out carcinoma, and the ductogram may be helpful in showing the surgeon which area of the breast harbors the cause of discharge (Statement E is true). However, many surgeons are able to identify the lobe(s) in-volved in the pathology by inspecting the nipple, noting the location of the discharging duct, and by palpation, ob-serving which portion of the breast produces discharge when compressed. Usually, ductography is not easily per-formed and is of limited usefulness when discharge is not spontaneous, profuse, and confined to a single duct. There-fore, statement A is false; ductograms should not be per-formed on all patients with nipple discharge. Furthermore, only bloody or serous discharges are of concern. A large portion of patients with discharge have secretions typical of fibrocystic change (ie, a dark brownish or greenish fluid rather than a truly bloody or serous discharge). Milky dis-charge is normal.

In Case 5-7, the patient’s entire left breast is abnormally dense (Statement A is true). There is skin thickening as well. This is a nonspecific appearance (Statement D is true); infection and inflammatory carcinoma are both high on the differential diagnosis list (B is true; C is false). Breast carcinoma may incite an inflammatory response in the breast, mimicking a benign infectious process both clinically and radiographically. The patient turns out to have an elevated white blood cell count and fever with marked pain. This information now makes infection more likely than tumor, and a course of antibiotics with follow-up imaging to monitor resolution is appropriate (State-ment E is true).

Figure 5-16 shows the follow-up mammogram after sig-nificant clinical resolution. The mammographic findings have resolved, and the left breast now appears very similar to the right one. 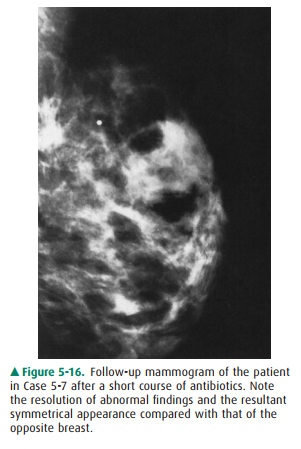 Infectious mastitis occurs more frequently in lactating women but is not uncommon in nonlactating women, particularly in diabetic patients. Imaging (mammography or ultrasound) is useful to exclude a drainable abscess collec-tion and to provide a baseline for monitoring resolution to exclude carcinoma.

Case 5-8 illustrates the importance of correlation with history and physical examination. This patient has pain, as in the last case, but her mammographic abnormality is much more localized and appears more like a malignant mass, being a high-density opacity with excessive spicula-tion. However, this, too, is a benign process. The patient was in a motor vehicle accident 2 months earlier and sustained a severe injury to the right side of her chest. Physical exami-nation shows a resolving laceration and contusion that ex-tends in a linear fashion over the right breast (no wonder she is sore!). A CT scan performed at the time of trauma showed the acute injury precisely in the area shown on the mammogram. These mammographic features are consis-tent with a resolving hematoma from acute trauma. There-fore, no further action is warranted at this time, other than follow-up (Statement C is true). Although pain is not a prominent feature of carcinoma, patients with cancer may be symptomatic. Therefore, pain does not always indicate benignancy (Statement A is false).

The mammographic appearance would certainly be highly suspicious for invasive carcinoma in the absence of clinical information, but with careful correlation we are able to avoid biopsy in this case (Statement B is false).

Anticoagulation therapy with resultant bleeding could also have this appearance (Statement D is false).