Enterprise resource planning (ERP) has evolved as a strategic tool, an outcome of over four decades. This is because of continuous improvements done to the then available techniques to manage business more efficiently and also with developments and inventions in information technology field.

Prior to 1960s businesses generally relied on traditional ways of managing inventories to ensure smooth functioning of the organizations. These theories are popularly known as ‘Classical Inventory Management or Scientific Inventory Control Methods’. Most popularly used among them were Economic Order Quantity (EOQ); Bill of Material (BOM) etc. However these systems had very limited scope.

ERP system has evolved from the Material Planning System of 1980’s. There are various phases through which this evolution process has gone through. The various phases of development of resource planning system in relation to time and evolution of concept of ERP. 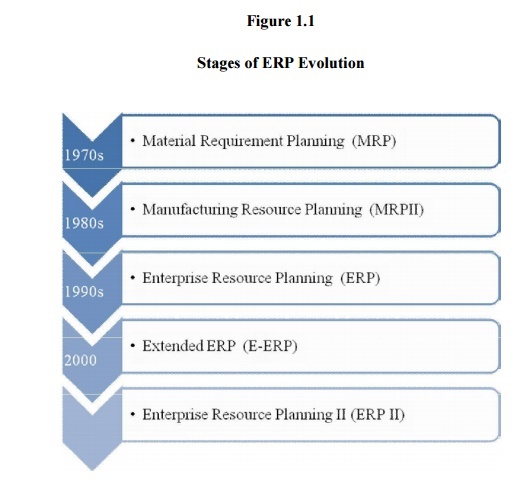 MRP was the fundamental concept of production management and control in the mid-1970s and considered as the first stage in evolution of ERP. Assembly operations involving thousands of parts such as automobile manufacture led to large inventories. The need to bring down the large inventory levels associated with these industries led to the early MRP systems that planned the order releases. Such planned order releases ensured proper time phrasing and accurate planning of the sub-assembly items, taking into account complex sub-assembly to assembly relationships characterized by the Bill of Materials.

A typical example is a bicycle manufacture. To manufacture 100 units of bicycles, one needs 200 wheels, 100 foot-pedals, and several thousands of spokes. On a given day, a plant may have 40 units of complete bicycles in stock, 57 units of wheels, 43 units of foot-pedals and 879 units of spokes. If the plant is to assemble 20 units of bicycles for the next 4 days of production, wheels and spokes-is a non trivial problem. If the independent demand of the spare parts is also to be taken into account, one can visualize the complexity of it.

A typical automobile plant with hundreds, if not thousands of parts, has to face problems that are in order of magnitude even more difficult. MRP systems address this need. Using the processing power of computers, databases to store lead-times and order quantities and algorithms to implement Bill-of-Material (BOM) explosion, MRP systems brought considerable order into the chaotic process of material planning in a discrete manufacturing operation.

Essentially MRP addresses a single task in manufacturing alone. Material requirement planning (MRP) system was adopted by firms for creation and maintenance of master data and bill of material across all products and part within an organization. MRP on the other hand was an outgrowth of bill of material (BOM) processing, which is purchase order management that utilizes parts list management and parts development.

A natural evolution from the first generation MRP systems was the manufacturing planning systems MRP II that addressed the entire manufacturing function and not just a single task within the manufacturing function. MRP II went beyond computations of the materials requirement to include loading and scheduling. MRP II systems could determine whether a given schedule of production was feasible, not merely from material availability but also from other resource point of view.

Typically, the resources considered from MRP II systems would include production facilities, machine capacities and precedence sequences. The increased functionality enabled MRP II systems provided a way to run the system in a loop. First it was used to check the feasibility of a production schedule taking into account the constraints; second to adjust the loading of the resources, if possible, to meet the production schedules; third to plan the materials using the traditional MRP II systems. Both MRP system and MRP II systems were fairly successful in industry. Due to the power of information systems-databases, algorithms and their integration, organizations did find real support for efficiently managing the manufacturing function in the eighties.

The nineties saw unprecedented global competition, customer focus and shortened product life cycles. To respond to these demands corporations had to move towards agile (quick moving) manufacturing of products, continuous improvements of process and business process reengineering. This called for integration of manufacturing with other functional areas including accounting, marketing, finance and human resource development.

Further developments in the enterprise resource planning system concept have led to evolution of extended ERP (E- ERP) or web - enabled ERP. With globalization on one hand and massive development in the internet technology on the other, need for web based IT solution was felt. Thus E- ERP is development in the field of ERP which involves the technology of Internet and World Wide Web (WWW) to facilitate the functions of an organization around the web.

ERP II is the advanced step of E-ERP. It is the software package which has strengthened the original ERP package by included capabilities like customer relationship management, knowledge management, workflow management and human resource management. It is a web friendly application and thus addresses the issue of multiple office locations.

Large corporations like General Motors (GM), Ford, Hewlett Packard (HP), and Digital primarily viewed themselves as manufacturing companies until the 1980s. Naturally complex MRP systems were considered the ultimate in enterprise information systems. The investments in hardware and software to manage such complex manufacturing solutions gave these systems a visibility unparalleled in the industry. Compared to these systems accounting systems, financial systems or personnel information systems were relatively inconsequential to the organization.

With the globalization of operations and the proliferation of computer networks, it was important that the manufacturing organizations extend their information system across the supply chain.

integration of accounting and financial information systems with manufacturing systems. In fact with large capacities built around the world particularly in Asian countries, outsourcing and contract manufacturing became viable alternative even in the high-tech industries like semi conductor manufacturing.

Suddenly the need was for an Enterprise Information System that looks beyond the manufacturing function to address inbound logistics, outbound logistics, manufacturing, materials managements, project management, quality management, accounting, finance, sales and personnel management. It was nearly impossible to integrate individual modules of information systems. What was necessary was a system that addressed the enterprise needs from the design stage. ERP systems were the natural choice in this changed scenario.