In all those poisoned patients where there appears to be no immediate crisis, a detailed and thorough clinical examination should be made with special reference to the detection and treatment of any of the following abnormalities :

Some common drugs which produce hypothermia are mentioned in Table 3.6. It is essential to use a low reading rectal thermometer. Electronic thermometers with flexible probes are best which can also be used to record the oesopha-geal and bladder temperatures. 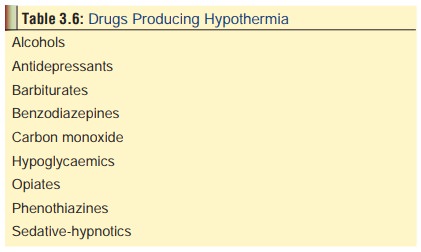 o     For mild cases, a warm water bath (115oF) is sufficient until the core temperature rises to 92o F, when the patient is placed in a bed with warm blankets. The rate of rewarming should not exceed 5o F per hour.

o     Heating the inspired air is recommended by some as very effective in raising the core temperature.

·              In addition, it may be necessary to correct other associated anomalies such as hypotension, hypoventilation, acidosis,and hypokalaemia.

Serum electrolytes to evaluate for metabolic acidosis should be obtained if there is any possibility of mixed ingestion or based on arterial blood gas, pH, PaCO2, bicarbonate, and serum electrolyte disturbances.

It must be first determined as to which abnormalities are primary and which are compensatory, based on the pH (Table 3.8). If the pH is less than 7.40, respiratory or metabolic alkalosis is primary.

In the case of metabolic acidosis, it is necessary to calculate the anion gap. The anion gap is calculated as follows:

If the anion gap is greater than 20 mmol/L, a metabolic acidosis is present regardless of the pH or serum bicarbonate concentration. Several poisons are associated with increased anion gap (Gap acidosis), while others do not alter it (Non- gap acidosis). The common causes for the various acid-base disorders are mentioned in Table 3.9. Treatment of metabolic acidosis: 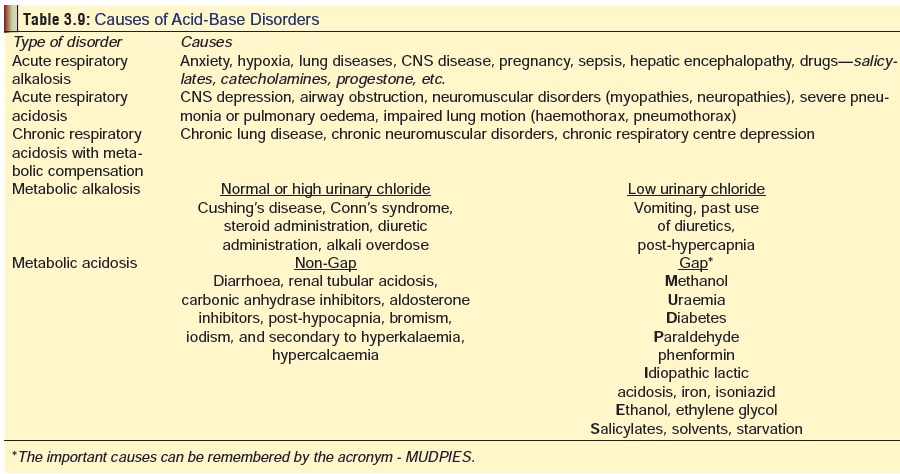 The drug of choice is sodium bicarbonate. It is widely considered to be the best antidote for acidosis of almost any aetiology.

There are several drugs and poisons which cause convulsions (Table 3.10). Improper treatment or mismanagement can lead to status epilepticus which is a life-threatening condition.

·              Monitor ECG, hydration, and electrolyte balance. Watch out for hypoglycaemia and cerebral oedema.

·        Adjuvant in poisoning with barbiturates, phenothiazines, cocaine, and carbamazepine

·        Possible use in lactic acidosis, diabetic keto-acidosis, and cardiac resuscitation

·          Can precipitate fatal arrhythmia if given in the presence of hypokalaemia.

Several drugs and poisons are associated with increased aggression which may sometimes progress to psychosis and violent behaviour (Table 3.12). This is especially likely if there are other predisposing factors such as existing mental disorder, hypoglycaemia, hypoxia, head injury, and even anaemia and vitamin deficiencies. Delirium is the term which is often used to denote such acute psychotic episodes, and is characterised by disorientation, irrational fears, hyperexcit-ability, hallucinations, and violence. Dementia refers to a more gradual decline in mental processes mainly resulting in confusion and memory loss, and though it is often organic in nature due to degenerative diseases, there are some drugs which can cause this especially on chronic exposure. Elderly patients are more vulnerable. Dementia due to drugs is usually reversible.

Delirium is managed by chlorpromazine, diazepam, or haloperidol. Caution is however necessary, since sedation which is inevitable with these preparations may sometimes result in more harm than benefit. Table 3.13 outlines measures for managing a violent patient in the casualty (Emergency department). 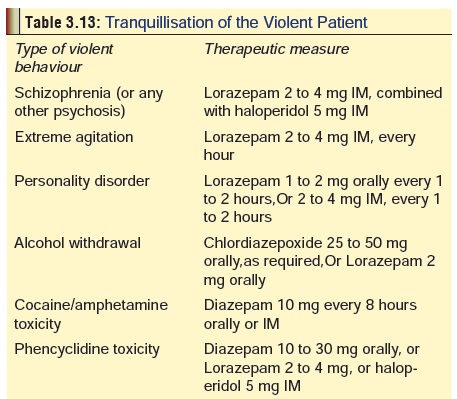 Exposure to several drugs and toxins can result in a wide variety of movement disorders ranging from full blown Parkinson’s disease to isolated tremors. The most frequent culprits for parkinsonian manifestations are phenothiazines and majortranquillisers, though there are several others which have also been implicated. Symptoms of Parkinsonism usually appear in the first three months of exposure and may be indistinguishable from idiopathic Parkinson’s disease.

Drug-induced myopathies may result from a direct toxic effect which may be local (e.g. injection of drug into muscle), or more diffuse when the drug is taken systemically. Repeated injections of antibiotics or drugs of addiction often lead to severe muscle fibrosis and contractures (myositis fibrosa,myositis ossificans). Clofibrate and aminocaproic acid cancause an acute necrotising myopathy with myoglobinuria and renal failure. Other drugs that can induce toxic myopathies

Tricyclic antidepressants, monoamine oxidase inhibitors, fluoxetine, lithium, buspirone, and levadopa are the principal causes of drug-induced akathisia. This is characterised by extreme restlessness with constant movement and muscular quivering. Dystonia usually manifests as facial grimacing or torticollis, and is mainly associated with phenothiazines, buty-rophenones, metoclopramide, tricyclic antidepressants, pheny-toin, and chloroquine. Chorea, which causes involuntary writhing movements of limbs is most commonly seen with anticonvul-sants (especially phenytoin), anabolic steroids, amphetamines, levodopa, and sometimes with cimetidine, ethanol, and cocaine. Phenothiazines and metoclopramide are most often the culprits in drug-induced tardive dyskinesia, which is characterised by stereotyped, slow, rhythmic movements. 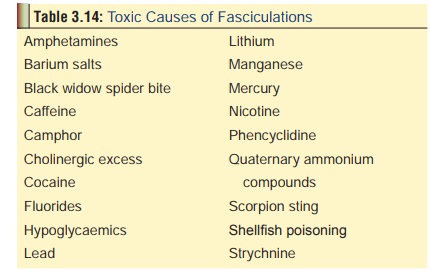 Fasciculations are contractions of muscle fibres withinan individual motor unit, and appear as twitching of affected muscles. Table 3.14 lists the major toxicological causes of fasciculations. Drug induced tremors are of several types, and are listed in Table 3.15. 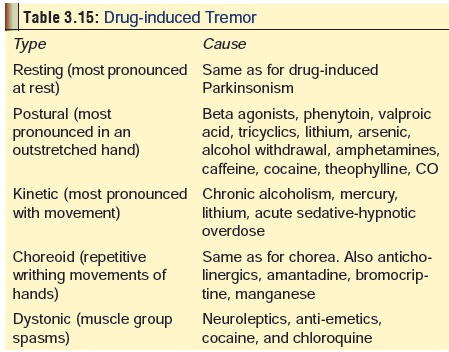 Most of the movement disorders induced by toxins or drugs are dose and duration related. Withdrawal of the incriminating agent commonly results in recovery. The usual measures under-taken in the management of the respective drug overdose (or abuse) must be instituted wherever applicable. 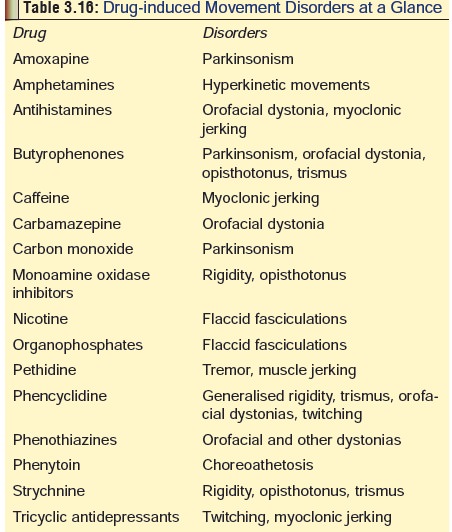 Treatment: Water restriction with or without loop diuretics.