The various methods of eliminating absorbed poisons from the body include the following:

Most drugs taken in overdose are extensively detoxified by the liver to produce inactive metabolites which are voided in the urine. Sometimes hepatic degradation produces active metabolites, but the secondary compounds are then converted to non-toxic derivatives. Under these circumstances, forced diuresis is inappropriate.

The procedure should be undertaken only if the following conditions are satisfied:

o     Most drugs are weak electrolytes and exist partly as undissociated molecules at physiological pH. The extent of ionisation is a function of the ionisation constant of the drug (Ka for both acids and bases), and the pH of the medium in which it is dissolved. Ionisation constants are usually expressed in the form of their negative logarithm, pKa. Hence the pKa scale is analogous to the pH notation : the stronger an acid the lower its pKa, and the stronger a base the higher its pKa.

o     Thus when pKa = pH, the concentrations of ionised and non-ionised drugs are equal. Cell membranes are  most permeable to substances that are lipid soluble and in the non-ionised, rather than the ionised form. Thus the rate of diffusion from the renal tubular lumen back into the circulation is decreased when a drug is maximally ionised. Because ionisation of acidic drugs is increased in an alkaline environment, and that of basic drugs is increased in an acid solu- tion, manipulation of the urinary pH enhances renal excretion.

Forced acid diuresis is no longer recommended for any drug or poison, including amphetamines, strychnine, quinine or phencyclidine

·              Haemodialysis was first used in 1913 in experimental poisoning, but was not applied clinically until 1950, when it was used for the treatment of salicylate overdose. It was widely employed in the subsequent two decades accompa- nied by much adulatory reportage of its efficacy in medical journals. However, the popularity of haemodialysis has declined since then owing to authentic observation of its lack of utility in several types of poisoning, and the high incidence of complications such as infection, thrombosis, and air embolism. 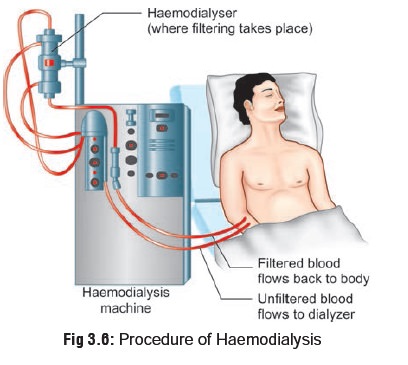 ·              All drugs are not dialysable, and so it must be ensured before embarking on this procedure that the following conditions are satisfied:

o     The substance should be such that it can diffuse easily through a dialysis membrane.

o     A significant proportion of the substance should be present in plasma water or be capable of rapid equili- bration with it.

o     The pharmacological effect should be directly related to the blood concentration.

o     Table 3.19 outlines the various factors in a toxin which can affect the outcome of haemodialysis. Extensive plasma protein binding, insolubility in water, and high molecular weight are the three most important factors in making haemodialysis ineffective.

·              The three basic components of haemodialysis are the blood delivery system, the dialyser itself, and the compo- sition and method of delivery of the dialysate. For acute haemodialysis, catheters are usually placed in the femoral vein and passed into the inferior venacava. Blood from one is pumped to the dialyser (usually by a roller pump) through lines that contain equipment to measure flow and pressure within the system. Blood returns through the second catheter. Dialysis begins at a blood flow rate of 50 to 100 ml/min, and is gradually increased to 250 to 300 ml/min, to give maximal clearance.

–– Best indications: Dialysis should be initiated, regardless of clinical condition, in the following situations: after heavy metal chelation in patients with renal failure, and following significant ethylene glycol or methanol ingestion.

–– Very good indications: Dialysis is usually effec-tive in patients with severe intoxications with the following agents:

–– Poor indications: Dialysis can be considered as a supportive measure in the presence of renal failure, following exposure to:

This is a technique that is increasingly becoming popular since it is capable of removing many of the toxins that are not removed well by haemodialysis (Table 3.20). 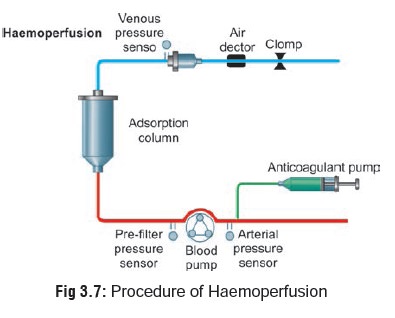 ·              An arteriovenous shunt or a double- lumen venous catheter is inserted into the patient’s vascular tree. The haemoperfusion column and lines are primed with heparinised saline in accordance with the manu-facturer’s instructions and connected to the shunt or catheter. On commencement of perfusion, a bolus of heparin is injected into the arterial line and heparini-sation is continued by administering an infusion of heparinised saline. 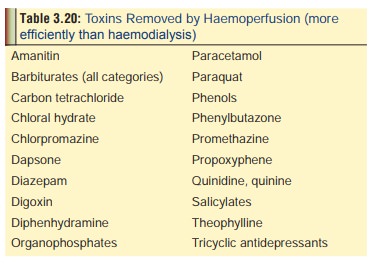 Although widely available, peritoneal dialysis today is almost never recommended for detoxification. In general, it is only 10 to 25% as effective as haemodialysis, and often only slightly more effective than forced diuresis. It is also time consuming, requiring 24 hours for successful comple-tion as compared to the 2 to 4 hour cycles of haemodialysis and haemoperfusion. The only advantages are that it does not require anticoagulation and uses minimal equipment.

·              Peritoneal dialysis works on the same principle as haemodialysis, allowing the diffusion of toxins from mesenteric capillaries across the peritoneal membrane into the dialysate dwelling in the peritoneal cavity. It involves the placing of a stylet catheter at the bedside under local anaesthesia, or the surgical insertion of a Tenckhoff catheter in the abdomen. Dialysate fluid is instilled, and 1 to 2 litres is exchanged each hour.

Haemofiltration is performed similar to haemodialysis except that the blood is pumped through a haemofilter. An arte-riovenous pressure difference induces a convective transport of solutes through a hollow fibre flat sheet membrane. This allows a substantial flow of plasma water, and a high permeability to compounds with molecular weight less than 40,000. The procedure can be done intermittently at high ultrafiltrate rates of upto 6 litres/hour, or continuously at rates of 100 ml/hour (Continuous Arteriovenous Haemofiltration, or CAVH). The latter is preferred in the treatment of poisoning.

The main advantage of haemofiltration is that it can remove compounds of large relative molecular weight (4,500–40,000). Such compounds include aminoglycoside antibiotics and metal chelates (such as iron-desferrioxamine). CAVH is also useful in poisoning with lithium, methanol, ethanol, and ethylene glycol.

This is a combination of haemofiltration with haemodi- alysis. It has been undertaken very rarely, and nothing much is known as to its actual advantages, if any.

Plasmapheresis is a technique of separating cellular blood components from plasma. The cells are resuspended in either colloids, albumin, or fresh frozen plasma, and then reinfused. It is very effective in eliminating toxic substances but exacts a heavy toll: a part of the patient’s plasma proteins are sacrificed in the process. Plasmapheresis has been used in cases of overdose with theophylline, carbamazepine, amanita, mercury, hemlock, etc., but serious complications greatly limit its utility.

This is a combination of plasmapheresis and haemoperfu-sion, and has rarely been used in poisoning.

This is another rarely used experimental procedure in the treatment of poisoning, and has been shown to be useful in certain cases of overdose involving cardiac depressants such as verapamil and lidocaine.