Antidotes work in any one of a number of ways. Common modes of action are as follows:

In the majority of cases of acute poisoning, all that is required is intensive supportive therapy with attention to all the details mentioned in the preceding sections. Specific antidotes are rarely necessary, besides the fact that only a few genuine antidotes exist in actual practice, though there is no denying the dramatic results that can be achieved with some of them in appropriate circumstances. Proper antidotal therapy can be life-saving in some situations.

Antidotes work in any one of a number of ways. Common modes of action are as follows:

Some antidotes interact with the poison to form an inert complex which is then excreted from the body, e.g. chelating agents for heavy metals, Prussian Blue for thallium, specific antibody fragments for digoxin, dicobalt edetate for cyanide, etc.

Some antidotes accelerate the detoxification of a poison,e.g. thiosulfate accelerates the conversion of cyanide to non-toxic thiocyanate, acetylcysteine acts as a glutathione substitute which combines with hepatotoxic paracetamol metabolites and detoxifies them.

The best example of this mode of action is provided by ethanol which inhibits the metabolism of methanol to toxic metabolites by competing for the same enzyme (alcohol dehy-drogenase).

Receptor site competition Some antidotes displace the poison from specific receptor sites, thereby antagonising the effects completely. The best example is provided by naloxone, which antagonises the effects of opiates at stereo-specific opioid receptor sites.

This mode of action is best exemplified by atropine which blocks the effects of anticholinesterase agents such as organo-phosphates at muscarinic receptor sites.

An example of this type of antidotal action is provided by the use of 100% oxygen in cyanide poisoning.

Table 3.21 represents a list of genuine antidotes recom-mended in toxicological practice today. In addition, there are certain therapeutic agents which are not antidotes as per the accepted definition, but which through their importance and sometimes specific role in the treatment of poisons, border on the concept of “antidotes”. Table 3.22 represents a list of such substances. Unfortunately in India, cumbersome governmental regulations and a lack of economic incentives for manufacturers have restricted availability of a substantial number of these life-saving drugs. As a result, doctors still use some substances which are more readily available as antidotes, but are generally considered obsolete or even dangerous in Western countries (Table 3.23). It is imperative that medical professionals strive to phase out these obsolete drugs, while working out strategies to make genuine antidotes more readily available. 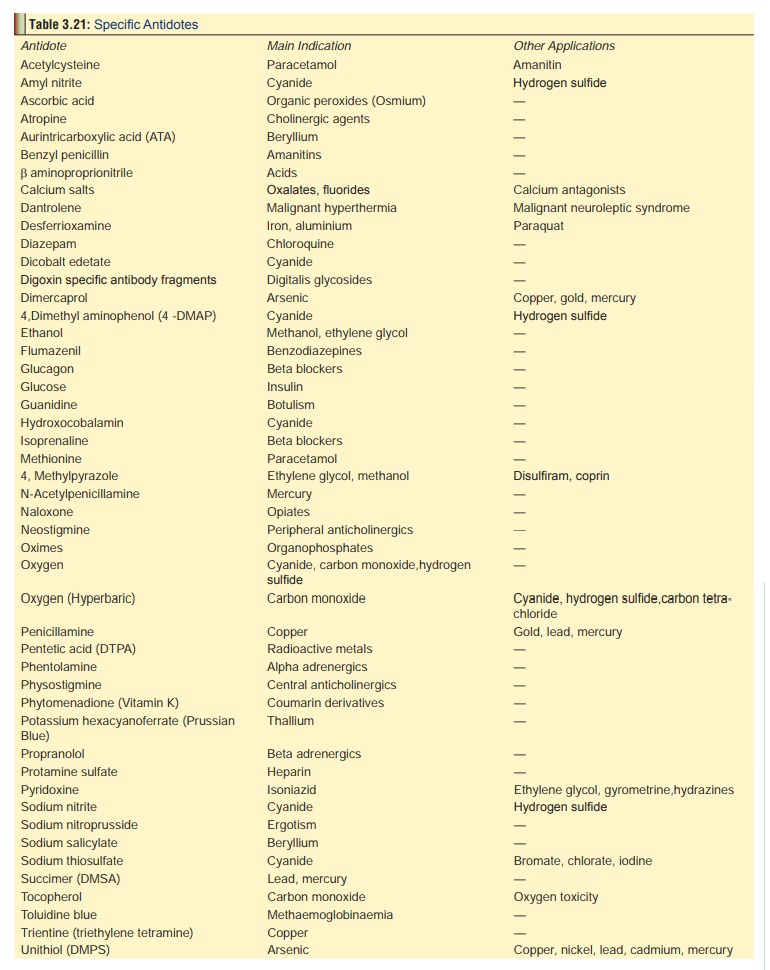 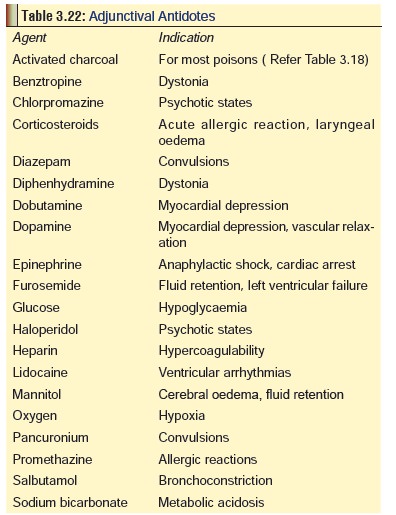 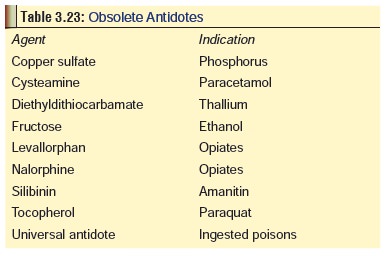