Histologic evaluation of a sample of the endometrium establishes the diagnosis of endometrial hyperplasia or carcinoma.

Histologic evaluation of a sample of the endometrium establishes the diagnosis of endometrial hyperplasia or carcinoma. Endometrial biopsy is most easily accom-plished by any number of different atraumatic aspiration devices used in the office.

The diagnostic accuracy of office endometrial biopsy is 90% to 98%, compared with dilation and curettage (D&C) or hysterectomy.

The routine Pap smear is not reliable in diagnosing endometrial hyperplasia or cancer, as only 30% to 40% of patients with endometrial carcinoma have abnormal Pap test results. On the other hand, endometrial carci-noma must be considered, and endometrial sampling obtained, when atypical endometrial cells or atypical glan-dular cells of undetermined significance (AGUS) are found on the Pap smear.

The most common indication for endometrial sampling is abnormal bleeding. After ruling out pregnancy in pre-menopausal women, an adequate tissue sample can be obtained with relatively little discomfort. Further man-agement is usually dictated by the results of the biopsy specimen. Dilatation and curettage (D&C) or hys-teroscopy with directed endometrial biopsy may beundertaken when outpatient sampling is not possible (e.g., because of a stenotic cervical os or a patient who cannot tolerate the outpatient procedure) or when the outpatient sampling has been nondiagnostic.

Sometimes the office endometrial biopsy will be reported as having “insufficient tissue for diagnosis.” In a postmenopausal woman who is not taking hormone therapy, this result is compatible with an atrophic condition of the endometrium. In other cases, the clinical suspicion of a pos-sible hyperplastic endometrial process may be high enough to warrant hysteroscopic evaluation with directed sampling, which allows more complete evaluation of the endometrium as well as direct diagnosis of polyps, myomas, and structural abnormalities (Fig. 45.2). 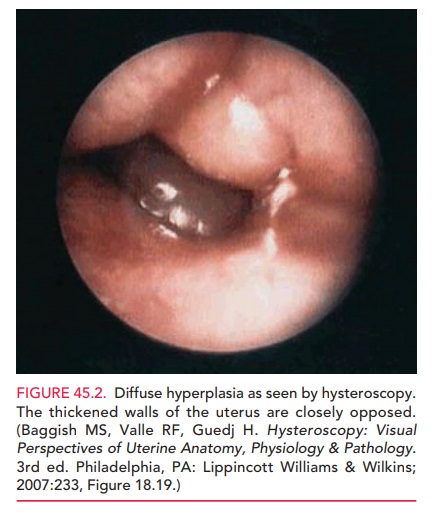 Transvaginal ultrasound (with or without the instal-lation of fluid for contrast, sonohysterography) may be used as an adjunct means of evaluation for endometrial hyperplasia as well as for polyps, myomas, and structural abnormalities of the uterus. An endometrial thickness of >5 mm in a postmenopausal patient, a polypoid mass, or fluid collection is often considered an indication for fur-ther evaluation and histologic samples. It is also useful in patients who have multiple medical problems, to help determine if the risks of endometrial sampling are less than the risk of not sampling. Nevertheless, an endometrialstripe of less than 5 mm, although consistent with menopause and endometrial atrophy, does not exclude the possibility of a nonestrogen-dependent carcinoma of the atrophic endometrium (Fig. 47.3). The value of transvaginal ultrasonography in a premenopausal woman is less significant, given day-to-day variations throughout menstrual cycle.

In women with breast cancer treated with tamoxifen, the optimal manner of monitoring the endometrium is unclear. Tamoxifen acts as a weak estrogen and is associatedwith increased risk of endometrial hyperplasia and carcinoma. Most agree that routine ultrasonography and endome-trial biopsy in asymptomatic women are not necessary. Endometrial abnormalities should be excluded in the presence of new symptoms, such as bloody vaginal dis-charge, spotting, or AUB.

The primary goals of treating endometrial hyperplasia are to reduce the risk of malignant transformation and to control the presenting symptoms. Synthetic progesterones orother progestins are central in the medical treatment of endome-trial hyperplasia. They act through a number of pathways.First, they work to alter the enzymatic pathways, which eventually convert endogenous estradiol to weaker es-trogens. Secondly, they decrease the number of estrogen receptors in the endometrial glandular cells, rendering them less susceptible to exogenous stimulation.

The most com-mon treatment regimen is cyclic medroxyprogesterone acetate, or MPA, which is administered for 10 to 14 days each month for at least 3 to 6 months. Continuous admin-istration is equally effective and may aid with compliance in patients who have an irregular cycle length.

Many view hyperplasia with atypia as a continuum with endometrial cancer. Hence, aggressive therapy for these patients is warranted, given the increased likelihood of pro-gression to endometrial cancer. After initial diagnosis, D&Cis indicated to better sample the endometrium and exclude under-lying endometrial cancer. In young women who desire futurefertility, long-term, high-dose progestin therapy may be used in an attempt to avoid a hysterectomy. As an alterna-tive to oral therapy, the progesterone intrauterine contra-ceptive has been reported to have response rates ranging from 58% to 100%. Definitive therapy by hysterectomy is recommended after completing childbearing. Patients who are treated medically for atypical hyperplasia should also be followed with periodic endometrial sampling (every 3 months after therapy), so treatment response can be monitored.