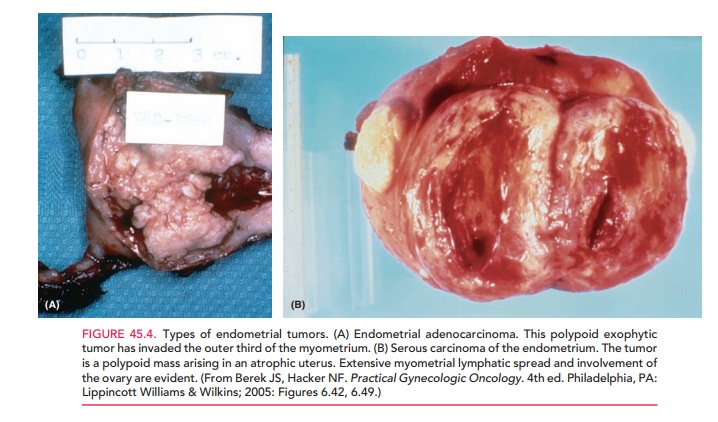 Endometrial carcinoma is typically a disease of post-menopausal women.

Endometrial carcinoma is typically a disease of post-menopausal women. Between 15% and 25% of postmenopausalwomen with bleeding have endometrial cancer. A majority ofcases are diagnosed while in stage I (72%). Despite recog-nition at early stages, endometrial cancer is the eighth leading site of cancer-related mortality among women in the United States. 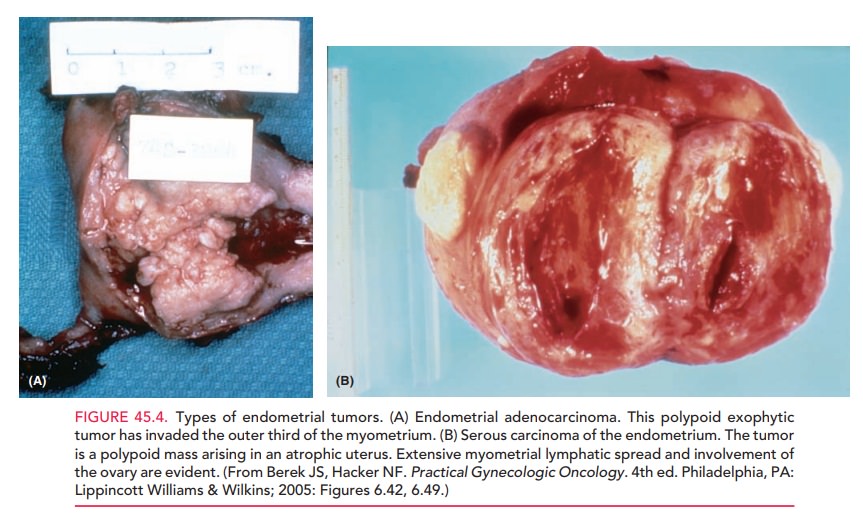 Two kinds of endometrial carcinoma have been identified. Type I endometrial carcinoma is “estrogen-dependent” and accounts for approximately 90% of cases. It is most commonly caused by an excess of estrogen unopposed by progestins. These cancers tend to have low-grade nuclear atypia, endometrioid cell types, and an overall favorable prognosis. The second type, Type II or “estrogen-independent” endometrial carcinoma, occurs sponta-neously, characteristically in thin, older postmenopausal women without unopposed estrogen excess, arising in an atrophic endometrium rather than a hyperplastic one. These cancers tend to be less well-differentiated, with a poorer prognosis.

Endometrial carcinoma usually spreads throughout the endometrial cavity first and then begins to invade the myometrium, endocervical canal, and eventually the lymphatics. Hematogenous spread occurs with endometrial carcinoma more readily than in cervical cancer or ovarian cancer. Invasion of adnexal structures may occur through lymphat-ics or direct implantation through the fallopian tubes. After extrauterine spread to the peritoneal cavity, cancer cells may spread widely in a fashion similar to that of ovarian cancer.

As mentioned earlier, the risk factors for developing endometrial cancer are identical to those for endometrial hyperplasia (see Table 45.2). 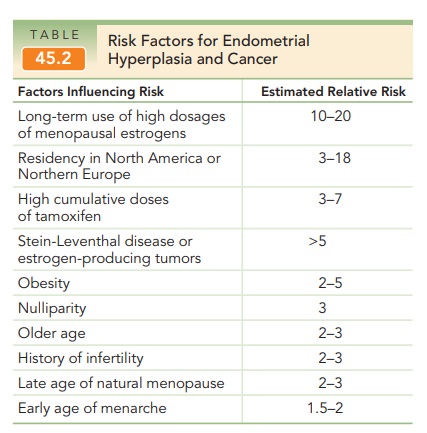 Endometrial sampling, prompted by vaginal bleeding, most frequently establishes the diagnosis of endometrial cancer. Vaginal bleeding or discharge is the only presenting complaint in 80% to 90% of women with endometrial carcinoma. In some, often older patients, cervical ste-nosis may sequester the blood in the uterus, with the presentation being hematometra or pyometra and a puru-lent vaginal discharge. In more advanced disease, pelvic dis-comfort or an associated sensation of pressure caused by uterine enlargement or extrauterine disease spread may accompany the complaint of vaginal bleeding or even be the presenting complaint. Fewer than 5% of women found to haveendometrial carcinoma are actually asymptomatic. 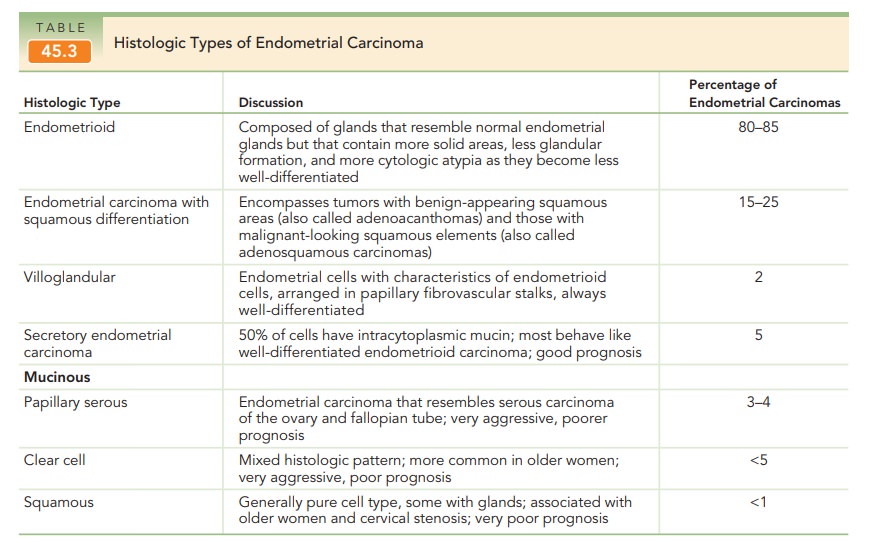 Special consideration should be given to the patient who pre-sents with postmenopausal bleeding (i.e., bleeding that occurs after 6 months of amenorrhea in a patient who has been diagnosed as menopausal).

In this group of patients, it is mandatory to assess the endometrium histologically because the risk of endometrial carcinoma is approximately 10% to 15%, although other causes are more common (Table 45.4). Other gynecologic assessments should also be made, including careful physical and pelvic examination, as well as a screening Pap smear. Preoperative measurement of the CA 125 level may be appropri-ate, because it is frequently elevated in women with advanced-stage disease. Elevated levels of CA 125 may assist in predictingtreatment response or in posttreatment surveillance. 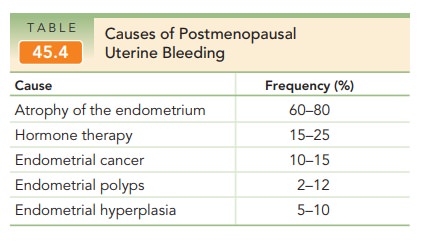 ·            G1 is well-differentiated adenomatous carcinoma (less than 5% of the tumor shows a solid growth pattern).

·            G2 is moderately differentiated adenomatous carcinoma with partly solid areas (6% to 50% of the tumor shows a solid growth pattern).

Most patients with endometrial carcinoma have G1 or G2 lesions by this classification, with 15% to 20% having undifferentiated or poorly differentiated G3 lesions.

The FIGO staging system incorporates elements correlated with prognosis and risk of recurrent disease— histologic grade, nuclear grade, depth of myometrial inva-sion, cervical glandular or stromal invasion, vaginal and adnexal metastasis, cytology status, disease in the pelvic and/or paraaortic lymph nodes, and presence of distant metastases (Table 45.5). The single most important prog-nostic factor for endometrial carcinoma is histologicgrade. Histologically, poorly differentiated or undiffer-entiated tumors are associated with a considerably poorer prognosis because of the likelihood of extrauterine spread through adjacent lymphatic and peritoneal fluid. Depthof myometrial invasion is the second most importantprognostic factor. 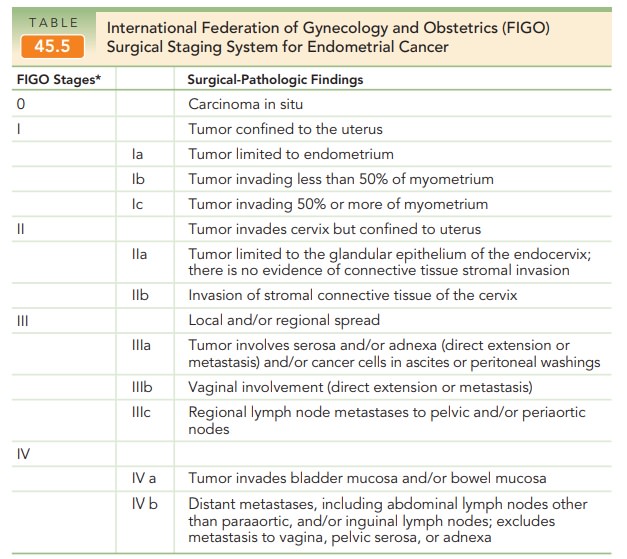 Hysterectomy is the primary treatment of endometrial cancer. The addition of complete surgical staging with an assessment of retroperitoneal lymph nodes is not only therapeutic, but also is associated with improved survival.

Complete surgical staging includes pelvic washings, bilat-eral pelvic and paraaortic lymphadenectomy, and com-plete resection of all disease. Sampling of the common iliac nodes, regardless of depth of penetration or histo-logic grade, may provide further information about the histologic grade and depth of invasion. Palpation of lymph nodes is equally inaccurate and should not substitute sur-gical resection of nodal tissue for histopathology.

Exceptions to the need for surgical staging include young or perimenopausal women with grade 1 endometri-oid adenocarcinoma associated with atypical endometrial hyperplasia, and women at increased risk for mortality secondary to comorbidities. Women in the former group who desire to maintain their fertility may be treated with high-dose progestin monitored by serial endometrioid sampling. Women in the latter group may be treated with vaginal hysterectomy. In ultra-high-risk surgical patients, therapeutic radiation may be used as primary treatment, although results are suboptimal.

Postoperative surveillance for women who have not received radiation therapy involves speculum and recto-vaginal examinations every 3 to 4 months for 2 to 3 years, and then twice a year to detect pelvic recurrent disease, particularly in the vagina. Women who have received radia-tion therapy have a decreased risk of vaginal recurrence as well as fewer therapeutic options to treat recurrence. Therefore, these women benefit less from frequent surveillance with cervical cytology screening and pelvic examinations for detection of recurrent disease.

Recurrent endometrial carcinoma occurs in about 25% of patients treated for early disease, one-half within 2 years, and three-fourths within 3 to 4 years. In general, those with recurrent vaginal disease have a better prog-nosis than those with pelvic recurrence, who in turn fare better than those with distant metastatic disease (lung, abdomen, lymph nodes, liver, brain, and bone).

The use of estrogen therapy in patients previously treated for endometrial carcinoma has long been considered con-traindicated because of the concern that estrogen might activate occult metastatic disease.

Hormone therapy can be used in the presence of the same indications as for any other woman, except that the selection of appropriate candidates for estrogen treatment should be based on prognostic indicators and the patient must be willing to assume the risk. Cautious individualized assessment of risks and benefits should therefore be made on a case-by-case basis.