Epilepsy - Disorders of consciousness and memory

Disorders of consciousness and memory

Epilepsy is a recurrent tendency to seizures. Seizures are due to paroxysmal discharge of cerebral neurones.

Approximately 2% have two or more seizures during their lives.

A cause for epilepsy is found in less than 25% of cases. Most of the others are thought to be genetically deter-mined.

·        Perinatal trauma and fetal anoxia are common causes of seizures in childhood.

Epilepsy is most often diagnosed on the history, from witnesses (see Table 7.7). Features suggestive of a fit are described under Fits and Faints. 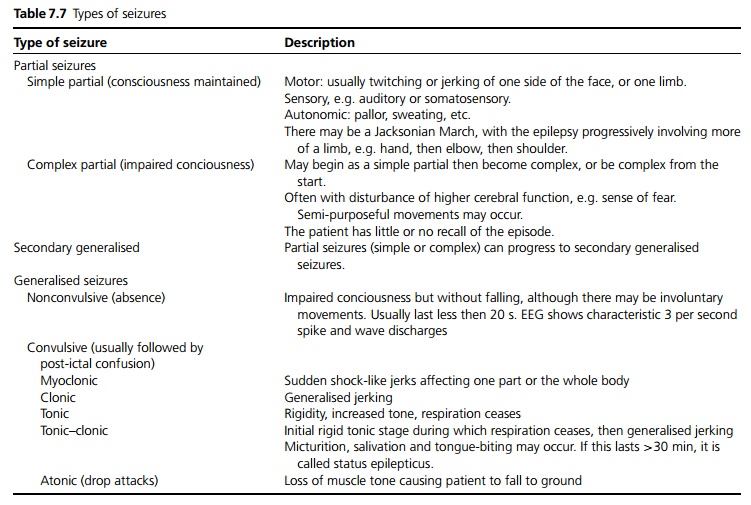 ·        A generalised seizure may be convulsive (jerking, with motor involvement) or non-convulsive (absence, motor tone unaffected).

The urgency of the tests depends on the clinical findings.

EEG may be normal even in genuine epilepsy.

MRI (or CT where MRI is not available) is increasingly used in all patients to look for an underlying lesion.

With a first seizure, it is important to exclude any underlying cause such as a biochemical disturbance, menin gitis, stroke etc which may need urgent treatment. It is also important to decide if the patient is likely to have further seizures.

·        If the seizure lasts <10 minutes with full recovery, with no neurological or systemic disorder the patient can usually be discharged home after a period of observation. They should be accompanied and be advised not to drive (see below).

This is defined as a prolonged single attack or continuing attacks of epilepsy without intervals of consciousness. The duration at which status is diagnosed is variable, most classically 30 minutes; however, treatment is started at 15 minutes in order to avoid brain damage or death. Status epilepticus is a medical emergency which carries a 10–15% mortality.

Ensure any usual AEDs given.

·        Lorazepam or diazepam are first-line treatment

·         If still in ‘refractory status’ (more than 60 minutes of seizures, or >30 minutes after phenytoin) thiopentone or propofol are used (anaesthetic agents) preferably with EEG monitoring to demonstrate effectiveness, and endotracheal intubation and transfer to an intensive care unit is required.

·        Following recovery from status epilepticus, long-term anti-epileptic medication should be reviewed or initiated.

Anti-epileptic drugs (AEDs) should be tailored to the individual (see Table 7.8). 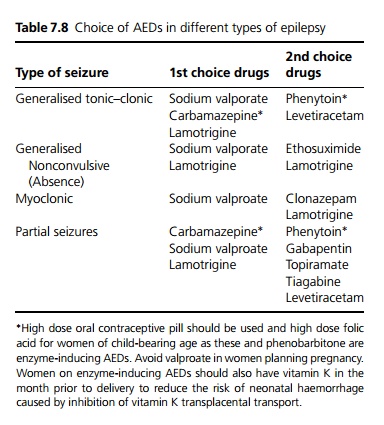 Neurosurgery is rarely undertaken except in selected patients, with persistent, frequent seizures where there is a significant adverse impact on quality of life, with poor control by medication and a clear electrical focus. Procedures include local resection, lobectomy, hemispherectomy and in some cases, less invasively by stereotactic radiosurgery.

Most people with epilepsy are able to lead a normal active life with medication to control their seizures, and continue their education and work. The management of epilepsy should include the discussion of social issues such as support at home, relationships, employment and psychological issues such as depression. Women who wish to become pregnant need special advice, but there is no reason why they should not have children. There are support groups available.

General advice includes avoidance of certain sports such as rockclimbing, unless seizures are well-controlled; swimming is safe as long as supervised; and bathroom doors should be left unlocked.

Driving: If a patient has had one or more seizures they are not allowed to hold an ordinary Category 1 UK driving licence until seizure-free for 1 year. However, if attacks only occur whilst asleep and this pattern is established for 3 years, patients can drive even if seizures continue. Following a provoked seizure, e.g. due to head injury, stroke, cranial surgery but excluding drugs or alcohol, the suspension may be shorter. Patients should be advised to contact the DVLA. The DVLA also advise patients not to drive whilst any reduction of their medication takes place for 6 months after each change.

Depending on any underlying cause and absence of EEG changes, anticonvulsant therapy can be discontinued if they have been free of an attack for 2–3 years.