The advent of modern science and technology driven development had devastated the planet’s environment precipitating several ecological crises like ozone depletion, climate change and acid rain. Environmentalism arose as a protest movement and ideology against the perilous destruction of the earth. We have only one habitable planet in the entire universe and there is no alternative home and therefore protecting the environment assumes paramount significance 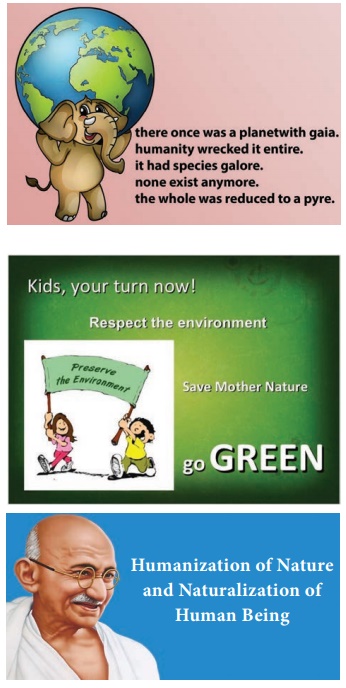 There exists a profound debate in philosophy about the relationship between man and ecology, development and environment. The Deep Ecology versus Shallow Ecology controversy is the central point of discussion in the debate.

Shallow Ecology refers to an ideology that approaches ecology through an anthropocentric and utilitarian outlook. American philosopher Anthony Weston is the greatest supporter of shallow ecology. It considers the human beings as fulcrum of life in this world. It accords the position of centrality and supremacy to man in ecology. It adopts an instrumental value of nature meaning that the ecology is important only as it useful to human welfare. The non-human biological forms and inanimate world are nothing but natural resources for human life. 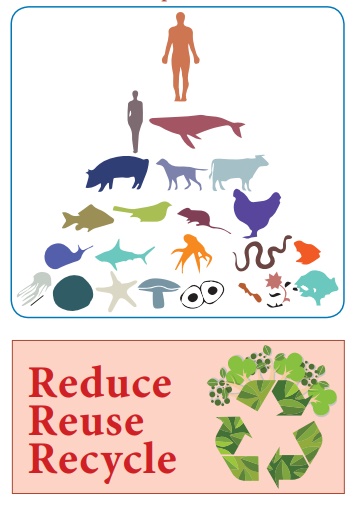 It looks for technological solutions for any environmental problem. If pollution imperils environment then alternative energy sources that are renewable and environment friendly should be developed. It believes in the strategy of three R,s - reduce, reuse and recycle.

Norwegian ecological philosopher Arne Naess coined the term Deep Ecology in 1973. He was influenced by Rachel Carson and Mahatma Gandhi. Deep ecology theory argues that the planet Earth is constituted by three interlinked parts of the human beings, non- human biological forms and the inanimate objects and forces. The human beings are one among the millions of living organisms in this world. They do not possess any superiority over other organisms. Anthropocentrism, that is, the belief in the centrality and supremacy of human beings in this world must be discarded. 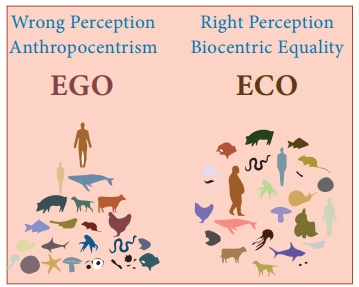 The non-human biological forms also possess intrinsic value, inherent worth and identity. It believes in biocentric equality. The human beings need to satisfy the vital needs by making careful use of this biodiversity. Preservation of biodiversity is indispensable. The interference of human beings on the domain of the non-human sphere of the planet so for, is destructive, excessive and unacceptable. There is an urgent need to limit the population of the world as the current population explosion has injected enormous stress on the ecology.

We should change our technology, philosophy, economy and politics so that ecological crises can be rectified and averted in the future. The human beings are ‘ecological selves’ the materialistic and consumerist life style must be changed and a new ecologically-sensitive social and economic order must be created. We should reduce our ‘ecological footprint’ by adopting a meager resources based life style. As the nomenclature indicated deep ecology asks deeper questions of how and why examining philosophically the impact of human life as one part of the ecosphere on other components. 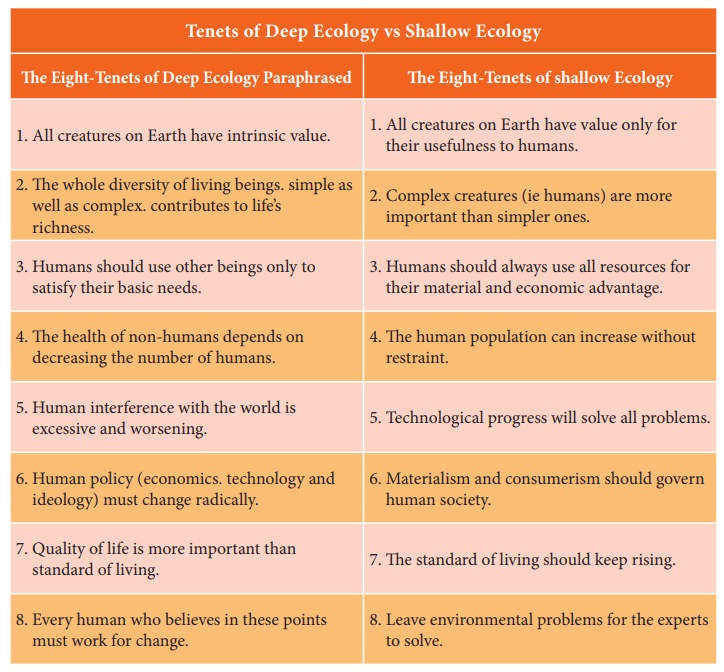 The term ‘Social Ecology’ was coined by American philosopher Murray Bookchin. It advocates radical changes in the existing social and political structures to make them ecologically correct. There are three distinct trends in Social Ecology 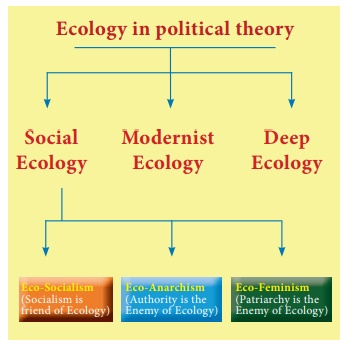 Rudolph Bahro in his book ‘From Red to Green’ supported eco-socialism. It considers capitalism as the enemy of ecology. By breeding materialism and consumerism capitalism has inflicted horrific destruction on the environment. The unlimited right to private property, the cardinal principle of capitalism endangers the precious health and wealth of the planet’s ecology. The nature is seen only as a commodity to be traded in the market and consumed by the man. Eco-socialism propounds a new approach in politics that combines socialism and ecologism. Socialism alone can nurture environment. The state must be imparted with a socialist content and direction to end the evil of capitalism and to protect environment.

Murray Bookchin advocated eco-anarchism. It considers authority as the enemy of ecology. The emergence of authority in human history in the form of State, religion and even family had led to the domination of man over man. The same forces have produced the subjugation and domination of nature by man. Man is a voluntary animal and his original instinct is the cooperative instinct.

In the ideal society, man establishes various associations based on voluntary cooperation to achieve development. But artificial forces of State, religion, private property have subverted the system and created structures of domination and subjugation. They have also wrought havoc on ecology. Therefore, we should create a new society based on voluntary instincts to protect man and ecology

Carolyn Merchant in the book ‘The Death of Nature’ propounded eco-feminism. This perspective considers patriarchy as the enemy of ecology and feminism as its beloved friend. Patriarchy means domination of man over women. Eco-feminism argues that patriarchy created the domination of man over not only women but over nature also. Patriarchy follows instrumental reason whereby both women and ecology are seen merely in terms of use value, as objects to be exploited and not as subjects endowed with life and intrinsic worth. Eco- feminism demands gender and ecology sensitive politics so that a new world of justice and sustainability can be established.

Modernist ecology is synonymous with shallow ecology. It attempts to promote a new harmony between liberalism and ecology. The liberal tenets and approach should be reformed so that the menace of ecological destruction can be avoided. It advocates a new ‘enlightened anthropocentricism’ where man, being the centre of the planet must consider the long-term interests of humanity and ecology in his developmental activities and should not be driven solely by short-term interests. Modernist ecology believes in the concept of "inter-generational justice" and argues that we did not inherit the earth from our previous generations but borrowed it from the future generations of humanity and therefore, there is a moral responsibility to protect and preserve the earth for their life in the future. The concept of ‘sustainable development’ is a basic characteristic of modernist ecology. It argues that ‘getting richer faster’ should not be the goal of human world rather ‘getting richer slower’ should be its guiding approach.

The modernist ecology is not a homogenous ideology. On the contrary, it is heterogeneous. There are different perspectives and prescriptions. Certain followers have called for the establishment of a totalitarian ‘Green State’ to protect ecology. Another group of supporters demanded ‘Green Capitalism’. The majority of advocates and supporters of modernist ecology suggested the green tilted State intervention in market to protect ecology and satisfy human interests.

It advocates a new style of politics, policy and political attitude towards nature. It argues for a fundamental shift in the relationship between politics and nature. Politics must understand, respect and protect the element of inter connectedness found in ecology linking the human beings, other biological forms and the inanimate world.

The destruction of ecology through modern development had resulted in the emergence of many protest movements all over the world. India also has witnessed many ecological protest movements seeking to protect environment and biodiversity. We shall study four such important ecological movements of India

Bisnoi non-violent struggle was a successful ecological movement in the 18th century in Rajasthan. Bisnoi is a religious sect in the Thar desert of Rajasthan founded by Guru Jambeshwar in medieval period. Bisnoi in Hindi means 29 and the sect came to be named after the 29 cardinal principles the founder expounded. The sect promoted a socio-religious belief system in perfect harmony with ecology creating a lush green local ecosystem in the desert. 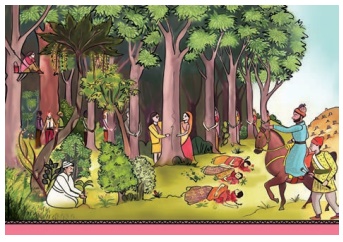 The maharaja of Jodhpur desired to construct a palace in the 18th century and sent the army to the Khejarli village to cut the acacia trees in the locally nurtured forest. The ecologically- conscious local population protested against the cutting of trees. An elderly woman named Amrita Devi was in the frontline of the protest and when the army refused to desist from cutting the trees she hugged the trees asking the army to cut her head instead of cutting the trees. The army remorselessly cut her head off and concerned but determined villagers came forward in a line to offer their lives. A total of 363 people sacrificed their lives for protecting the forest. Ultimately the maharaja after knowing about the terrible events in the village recalled the army and offered his apologies for the massacre. He also officially designated the area as a protected forest. Bisnoi Khejarli movement is perhaps, the first greatest ecological movement of modern India.

Chipko movement was a non-violent popular, ecological movement organised by villagers in the mountain state of Uttarkhand in 1973. ‘Chipko’ in Hindi means to hug. The agitators of Chipko movement embraced the trees to protect them from being cut thereby earning the name Chipko movement. The contractors of sports goods company began to cut the trees in the Alknanda valley of the Uttarkhand state (part of Utter Pradesh at that time) after getting government clearance. The enraged local population, especially women protested in a non-violent manner by embracing the trees and prevented the contractors. The organisational leadership was provided by an NGO called Dasholi Gram Swarajya Mandal (DGSM) that was formed a few years back by a noted social activist Chandi Prasad Bhatt.

The famous environmentalist Sundarlal Bahuguna joined the agitation and appealed to the union government to ban logging in the Himalayan forests. The large-scale participation of women was a significant and laudable feature of the Chipko movement. Many women leaders like Dhoom Singh Negi, Bachni Devi played a prominent role fighting for forest rights of the people. The movement gradually spread across many parts of the Himalayan Mountains forcing the government to officially ban logging from 1980. The movement symbolises the successful fusion of three major ideologies of feminism, environmentalism and Gandhism 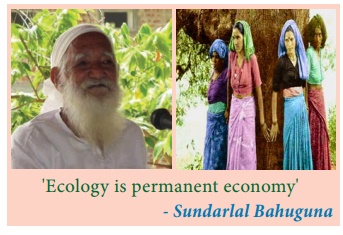 The Appiko movement is an ecological protest movement in Uttar Kannada district of Karnataka in the Western Ghats. It was inspired by the Chipko Movement and ‘appiko’ in Kannada means to embrace. The Uttar Kannada district falls in the Western Ghats. The launch of many developmental projects in the district has precipitated deforestation reducing the forest cover of the district from a massive 81 percent in 1950 to an alarming 24 percent in 1980. The ecologically-conscious people launched the movement with three-fold objectives of conservation of remaining tropical forests, afforestation of the denuded forests and dissemination of ideas on rational utilisation of forests.

The silent valley is an ecologically rich terrain in the Western Ghats in the Palakkad district of Kerala consisting of the tropical moist evergreen forests largely undisturbed by human activities. The valley is named after Sairandhiri (Draupati), the wife of Pandavas in the Indian epic Mahabharata. Another explanation of the nomenclature says that when the Englishmen visited there during the colonial period the valley was observed to be strangely silent because of the supposed absence of the noise-making insect Cicadas.

The Kerala Sasthra Sahitya Parishad, other civil society organisations and ecologically-conscious people conducted an intense protest against the project. They criticised the negative impact of the project on the environment especially the bio diversity of the valley. The Kerala government, in the face of stiff opposition from diverse sections of society dropped the project in 1980. The valley was declared a national park in 1985 and later on it came to be designated as the core area of the Nilgiris Biosphere Reserve. The Save Silent Valley movement is one of the most successful ecological movements of India in late 20th century. 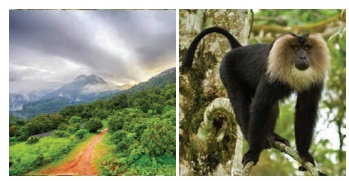