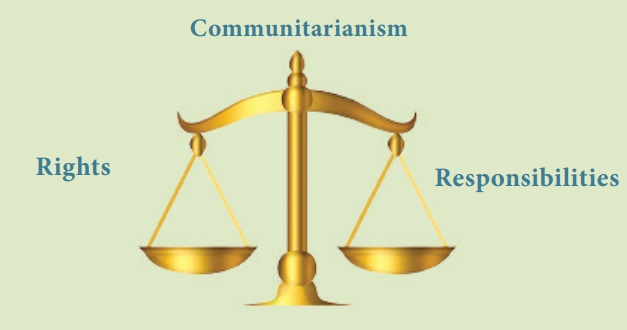 Communitarianism emerged as a political doctrine during the 1980s when Michael Sandel authored the book ‘Liberalism and the Limits of Justice’.

Communitarianism emerged as a political doctrine during the 1980s when Michael Sandel authored the book ‘Liberalism and the Limits of Justice’. He criticised the libertarianism and its thinker John Rawls in that work. The other political scientists supporting communitarianism include Alisdair MacIntyre, Michael Walzer, Charles Taylor, Amitai Etzioni nd Will Kymlicka. Though the British Socialist Goodwyn Barmy coined the word “communitarian” in the 1840s, the doctrine of communitarianism emerged only towards the end of the 20th century 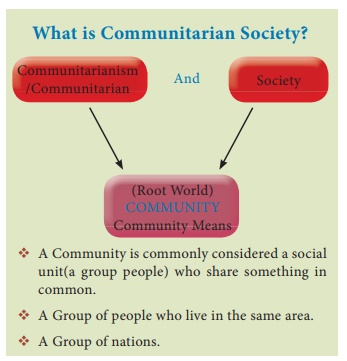 Communitarianism rose as a revolt against the prevailing two ideologies of libertarianism and Marxism. It criticised the thinkers of libertarianism for their over emphasis on individuals. It rejected Marxism for being committed to class-based action and analysis. However, the opposition was directed against Libertarianism that had become the ruling philosophy of mankind especially in the western world.

Communitarianism argues that man is not born in a vacuum. He is a social and cultural animal. Individuals are born in a community or culture and therefore inherit it. Their beliefs, behavior, skills, capacities, attitudes etc are predominantly influenced by the community. Every individual builds on these commonly available and acquired capacities to make a mark in his or her life time. Man is not an atomistic entity existing alone but is embedded in the community. The individual is not ‘unencumbered self ’ (completely free) from society but ‘situated self ’ (rooted and planted) in society

Communitarianism is a philosophy that emphasizes the connection between the individual and the community.

Although the community might be a family UNIT, Communitarianism usually is understood, in the wider, philosophical sense, As a collection of interactions, Among a Communitarian philosophy is based upon the belief that a person's social identity and personality are largely molded by community relationships, with a smaller degree of development being placed on individualism. 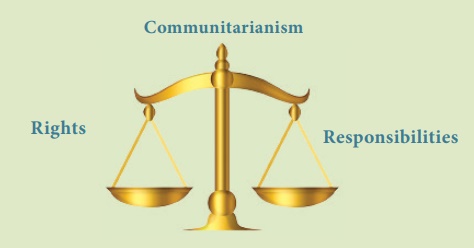 For example a child born in Tamil Nadu speaks Tamil language fluently and not Japanese where as a child born in Japan speaks Japanese fluently and not Tamil. A man living in a community where computer technology is already available in developed form may become a skilled person in software domain. On the contrary, a man living in a remote community that has not witnessed the growth of information technology will not have adequate software skills.

Communitarianism believes that rights and responsibilities are intimately related. It rejects the excessive reliance of libertarianism on the concept of individual autonomy and rights. Instead, it focuses on a new concept of rights where common good is given importance. They strongly contend that the common good of the community has supremacy and priority over the rights of the individuals as it is prior to them. Every person may have his own conception of good but such individual good must be subordinated to the idea of common good. A new concept of positive rights is propagated where in a wide variety of rights like State-subsidised education, State-subsidized housing, safe environment, universal healthcare are demanded for the community members. A synthesis between rights and responsibilities is advocated by certain thinkers who belong to Responsive Communitarianism. 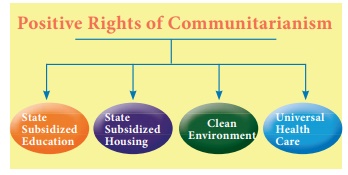 Therefore, we can conclude that Communitarianism as a political doctrine believes in the indispensability of community for the development of the ‘situated and embedded man’. The positive State should concentrate on the provision of positive rights to community and its people so that common good can be preserved and promoted. But Libertarianism still criticises Communitarianism as preparing the path for the emergence of collectivism and authoritarianism.