Anarchism is a political ideology that advocates the model of self-governed societies based on innate cooperative instincts of man.

Anarchism is a political ideology that advocates the model of self-governed societies based on innate cooperative instincts of man. Etymologically, anarchism is derived from the Greek word 'anarchos' meaning 'without authority'. One of the earliest political philosophers of anarchism was Pierre Joseph Proudhon who famously described profit as theft.

Russian thinker Peter Kropotkin and Russian author Leo Tolstoy are among the other important advocates of this philosophy.

Anarchism as an ideology seeks to abolish all authority and emancipate man from the State, property and religion. It alternatively visualizes a society based on voluntary association of human beings.

Anarchism considers the State as an unnecessary evil. State is an evil because it suppresses rights and liberties of man hindering his moral development. Unlike the negative liberalists who called the State necessary even though it is an evil, anarchism rejects the State as an unnecessary institution. They argue that the state does not perform any useful function in society and, therefore, it must be exterminated immediately. Bakunin, another famous anarchist thinker asserted that if there is a State, there must be domination and subjugation of one class by another class and therefore all States must vanish. 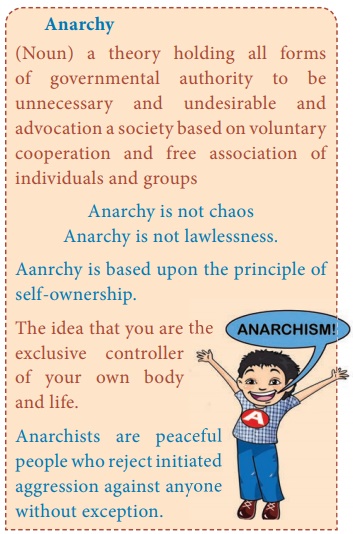 Anarchism does not champion the cause of disorder and disunity. On the contrary, it claims to embody order and unity. Human beings are naturally provided with cooperative instincts. They can lead a life of happiness and fulfilment guided by the instinct of voluntary cooperation. But the artificial institution of the State suppresses the cooperative instincts of man. It endangers freedom and rights of man. Anarchism aspires to destroy the State and implant in its place a new system of voluntary associations. Every man will voluntarily and enthusiastically participate in public life. Anarchy does not mean a society without rules, rather without rulers.

Anarchism believes in the principles of self -determination and self-ownership. Every human being has the right to self-determination and can decide his or her life based on his wishes and freedom. Similarly, every person has complete ownership of himself or herself and this is the most basic form of property. The State threatens these two important principles and therefore should be discarded.

Anarchism opposes not only State but also other social institutions like family and religion criticizing them to be responsible for the abominable exploitation of man. Some anarchists equate property with tyranny and condemn it as source of crime.

Anarchism is similar to Marxism in demanding the abolition of the State. But while Marxism believes that the State will wither away after the establishment of socialism, anarchism demands the immediate destruction of the State. 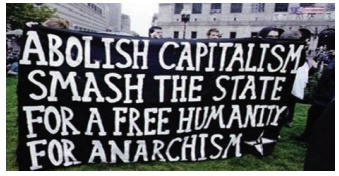 Gerard Casey supported anarchism in the 21st century by stating that not only the totalitarian and repressive ones all States are criminal organizations.

A new system of Stateless societies is the cherished goal of anarchism.

Philosophers, critical of anarchism, opined that anarchism is too optimistic of the human nature. Their assumptions are plainly naive. They are oblivious to the ground realities especially the selfish side of human beings. Not all human beings are instinctively cooperative. Moreover, as man is not only rational but also emotional at times strongly influenced by emotions a cooperative individual may become selfish. A world or society without the State will prove to be a source of immense misery as issues like terrorism, cybercrime, and environmental pollution will spiral out of control. The safety of the world becomes fragile in the absence of the State as extremist groups will gain access and control over nuclear weapons and herald death and destruction.