Code redundancy is the measure of redundancy bits in the encoded message sequence.

A block code of length n and 2k code words is calleda linear (n, k) code if and only if its 2k code words form a k-dimensional subspace of the vector space of all the n-tuples over the field GF(2). The message occurring frequently can be assigned short code words, whereas message which occur rarely are assigned long code word, such coding is called variable length coding.

The types of error control method

Channel capacity is defined as the maximum of the mutual information that may be transmitted through the channel.

The needs for encoding

To improve the efficiency of communication

To improve the transmission quality.

The entropy of a source is a measure of the average amount of information per source symbol in a long message. Channel coding theorem is applied for discrete memory less additive white gaussian noise channels.

The advantages of Shannon fano coding

3.     It can be used for error detection and correction.

The objectives of cyclic codes :

The source coding theorem shows that (in the limit, as the length of a stream of independent and identically-distributed random variable (data tends to infinity) it is impossible to compress the data such that the code rate (average number of bits per symbol) is less than the Shannon entropy of the source, without it being virtually certain that information will be lost. However it is possible to get the code rate arbitrarily close to the Shannon entropy, with negligible probability of loss.

Given X is an  i.i.d. source, its time series X1, ..., Xn is i.i.d. with entropy H(X) in the discrete-valued case and differential entropy in the continuous-valued case. The Source coding theorem states that for any ε> 0 for any rate larger than the entropy of the source, there is large enough n and an encoder that takes n i.i.d. repetition of the source, X1:n, and maps it to n(H(X) +ε) binary bits such that the source symbols X1:n are recoverable from the binary bits with probability at least 1- ε.

Proof of Achievability. Fix some ε> 0, and let

The typical set, Aεn,isdefined as follows: 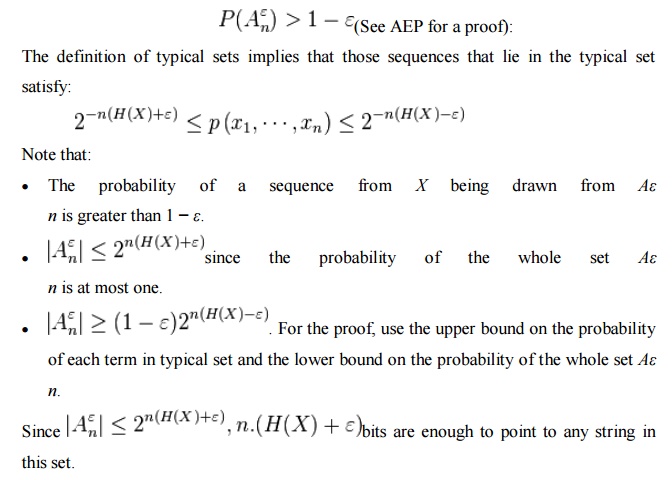 Proof of Converse. The converse is proved by showing that any set of size smaller than Aε

n (in the sense of exponent) would cover a set of probability bounded away from 1. 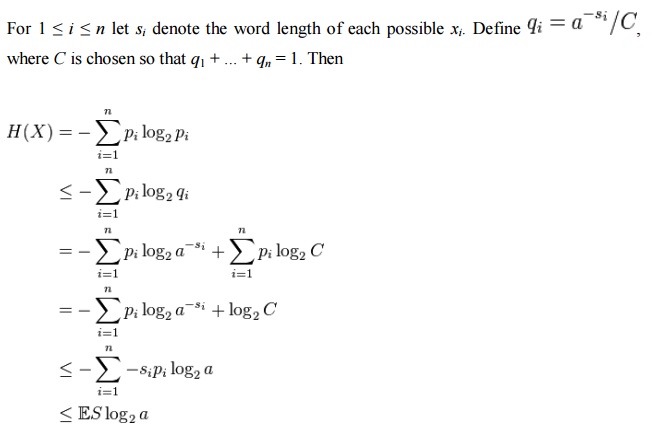 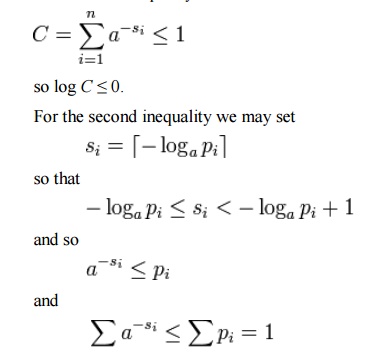 and so by Kraft's inequality there exists a prefix-free code having those word lengths.