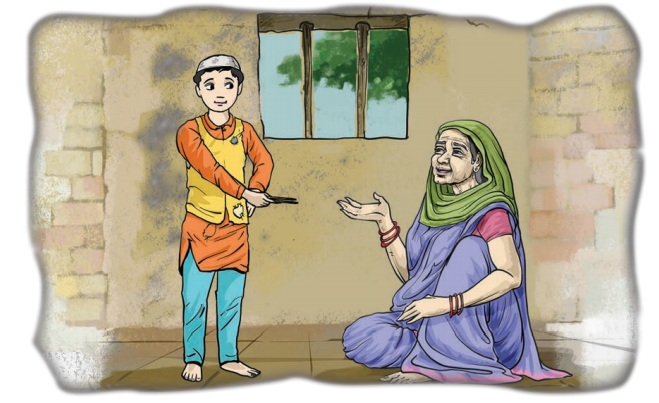 How wonderful and beautiful was the morning of Eid! The trees looked greener, the field more festive, the sky had a lovely pink glow. The sun seemed brighter and more dazzling than before to wish the world a very happy Eid.

The village was filled with excitement. Everyone was up early to go to the Eidgah. The boys were more excited than the others. They had been talking about it all the time. Finally the day had come. And now they were impatient. They were taking their treasure out of their pockets, counting and recounting it before putting it back. Mahmood counted “One, two, ten, twelve”– he had twelve coins. Mohsin had “One, two, three, eight, nine, fifteen” coins. With this money, they would buy countless things: toys, sweets, paper-pipes, rubber balls – and much more.

The happiest of the boys was Hamid. He was only four, thin and poorly dressed. Last year his father had died of cholera. Then his mother also died. From then Hamid lived with his old Granny Ameena and was as happy as a lark. She told him that his father had gone to earn money. And that his mother had gone to Allah to get lovely gifts for him. This made Hamid very happy. Hamid had no shoes on his feet; the cap on his head was soiled and tattered; He knew that his father would come back with sacks full of silver and his mother with gifts from Allah. Then he would have more than Mahmood, Mohsin, Noorey and Sammi.

Hamid’s Granny Ameena was sad. It was Eid and she did not have even a handful of grains. If only her son were there, it would have been a different kind of Eid! Hamid went to his grandmother and said, “Granny, I will be the first to get back. Don’t worry!” Ameena was worried. Other boys were going out with their fathers. How could she let him go to the fair all by himself?

Hamid left with the other boys. Hamid was like one with wings on his feet. They ran on ahead of the elders and waited for them under a tree. They reached the suburbs of the town. On both sides of the road were big houses of the rich. In the gardens, mango and leechee trees were full of fruits. Then they came across the stores of the sweets - vendors. All decorated so gaily! Every store had sweets piled up in heaps like mountains.

I. Choose the correct answers and fill in the blanks.

a. pens and pencils

b. toys and rubber balls

a. Mahmood, Mohsin, Noorey and Sammi.

b. Raghul, Preethi, Sam and Mufeed.

4. ‘If only her son were there, it would have been a different kind of Eid’! What had happened to her son?

a. Her son had died.

b. Her son had gone abroad.

c. Her son had gone on a tour.

b. He ran slowly.

There are 109 members in Marapanhalli Laxmayha family who live in Karnataka’s Kolar district. It is one among the last few purely joint families in India. 85 members of this massive family live under a single roof that spans 20 rooms. The other 24 live in the fields next to the house.