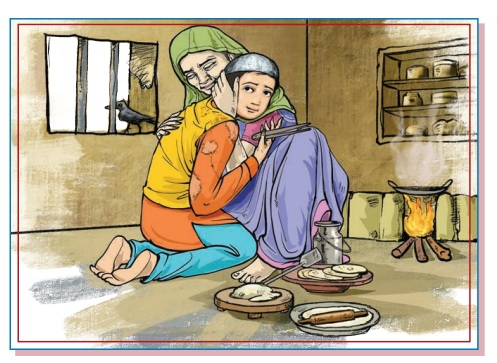 Next to the sweet-shops there were a few hardware stores and jewellery shops. The boys were not interested in anything there. So they walked ahead except Hamid.

It occurred to Hamid that his granny did not have a pair of tongs. Each time she cooked chappatis, the iron pan burnt her hands. If he bought her a pair of tongs she would be very pleased. She would never again burn her fingers. It would be a really useful thing to have in the house. So Hamid stopped to look at a pile of tongs at the hardware shop and asked the shopkeeper, “How much for this pair of tongs?” The shopkeeper looked at him and replied “It’s not for you.”

“Why should it not be for sale?

“It will cost you six paisa”

Hamid’s heart sank. “Tell me the correct price,” he said.

“All right, it will be five paisa, take it or leave it.”

Hamid said, “Will you give it to me for three?” Then he walked away, afraid the shopkeeper would scream at him. But the shopkeeper did not scream. On the contrary, he called Hamid back and gave him the pair of tongs. Hamid carried it on his shoulder as if it were a gun to show it to his friends. Mohsin laughed and said, “Are you crazy? What will you do with the tongs?” Hamid flung the tongs on the ground and replied, “Try and throw your water carrier on the ground. It will break.”

Mahmood said “Are these tongs some kind of toy?”

“Why not?” replied Hamid. “Place them across your shoulders and it is a gun; carry them in your hands and it is like the musical instrument carried by singing monks. My tongs are like a tiger among toys.”

Sammi who had bought a small tambourine asked “Will you exchange them for my tambourine? It is worth eight paisas.” But Hamid would not. The pair of tongs won every one over to its side. By eleven the village was again filled with excitement. All those who had gone to the fair were back at home. Hamid too returned home. As soon as she heard his voice, Granny Ameena ran out of the house, picked him up and kissed him.

Suddenly she noticed the tongs in his hand. “Where did you find these tongs?”

“How much did you pay for them?”

“You are a stupid child! It is almost noon and you haven’t had anything to eat or drink. Couldn’t you find anything better in the fair than this pair of iron tongs?”

Hamid replied in an injured tone, “You burn your fingers on the iron pan so I bought them.” Granny was deeply moved by Hamid’s selflessness. She started crying. For the wretched woman, the pair of tongs was as precious as sacks of silver.

Translated and Adapted by Uma Raman

b. sweets for himself.

a. Hamid valued his toy.

b. Hamid bought a tiger toy.

4. Hamid’s granny scolded him for buying iron tongs. Then she understood that Hamid had bought it ___________

a. out of compulsion.

b. out of love and concern.

c. out of interest.