Protein Energy Malnutrition (PEM) is defined as a range of pathological conditions arising from coincident lack of varying proportions of protein and calorie.

Diseases due to the deficiency of proteins and calories occur commonly among weaned infants and pre-school children in India and other developing countries.

Protein Energy Malnutrition (PEM) is defined as a range of pathological conditions arising from coincident lack of varying proportions of protein and calorie, occurring most frequently in infants and young children and often associated with infection (WHO,1973) PEM affects children under 5 years of age belonging to the poor underprivileged communities.

Under nutrition is a complex condition with multiple deficiencies such as proteins,energy and micro nutrient deficiencies often occurring together. According to WHO, malnutrition is an underlying factor in over 50 % of the 10 – 11 million yearly deaths of children under 5 years.

Protein energy malnutrition may be classified into three types as follows:

PEM is prevalent in all parts of the World and in all ages. It is primarily a disease that occurs in young children who live in poverty. In India, PEM is the most widespread form of malnutrition among pre-school children. A majority of them suffer from varying grades of malnutrition.

The paths leading from early weaning to Nutritional marasmus and from protracted breast feeding to kwashiorkor is schematically presented below: 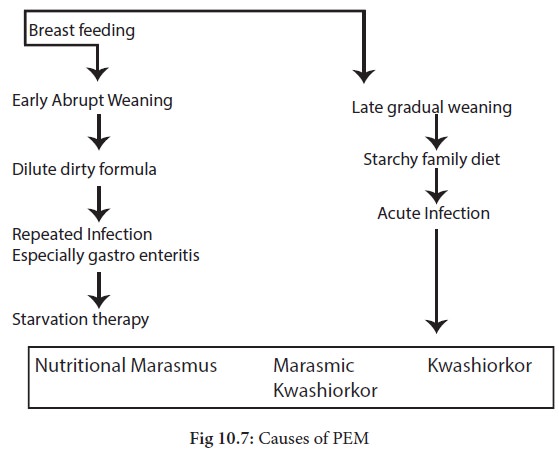 Clinical signs and symptoms of PEM

This disease was first reported to occur in children in Africa by Dr.Cicely Williams in 1935. It is caused by deficiency of proteins in the diet. The important symptoms of the disease are:

·         Change in the colour of the skin(hypo and hyperpigmentation)

·         Angular stomatitis(Cracks in the corners of mouth)

This is caused by severe deficiency of proteins and calories in the diet. The important features are as follows: 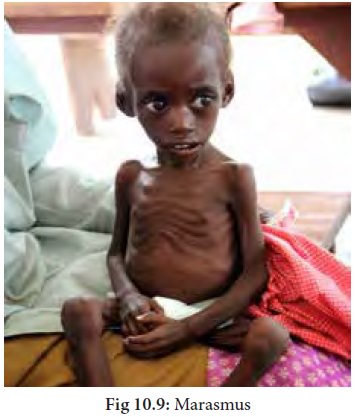 Children suffering from this disease show signs of both kwashiorkor and marasmus.

Differences between Kwashiorkor and Marasmus Children with severe PEM are often seriously ill when they first present for treatment. They should be admitted to a hospital for the treatment of life- threatening problems. Specific deficiencies should be corrected and metabolic abnormalities reversed. When the child’s condition is stable and the appetite has returned,which is usually after 2- 7 days ,the treatment can be continued outside the hospital .

A. Hospital based management

Dehydration: Diarrhoea leading to dehydration is a serious and often fatal event in children with severe malnutrition. Skin elasticity is poor in children with marasmus and their eyes are normally sunken. Unlike Kwashiorkor, the altered skin elasticity is masked by oedema. Patients with mild to moderate dehydration can be treated by oral or nasogastric administration of fluids.

Infection: Infection is often the immediate cause of death in PEM. It is difficult to detect infections clinically as fever and rapid pulse rate may not be present in severely malnourished patients. Since infection is common, antibiotics should be given routinely to all malnourished patients. Children with complications should be treated with broad spectrum antibiotics like amoxicillin and ampicillin. Intestinal infections like ascariasis mustbetreated with appropriate de-worming agents.

Hypoglycemia: A child may become drowsy or develop convulsions due to hypoglycaemia. In mild cases, oral administration of 50 ml of 10% glucose may be sufficient. If a child develops convulsions or becomes unconscious, 10% glucose should be given intravenously(5ml/kg) followed by 50ml of 10% glucose by nasogastric tube,

Hypothermia: Marasmic children are prone to have low body temperature. If the room is cold, the child should be properly covered with a blanket. The state of shock should be treated with intravenous injection of glucose –saline or blood transfusion.

Anaemia: Severe anaemia is dangerous, as it can result in heart failure. If the haemoglobin falls below 5g/dl,blood transfusion should be given.

Although treatment of complications can reduce mortality, proper dietary management is important for complete recovery. The child should be given a diet providing sufficient quantities of calories and protein, in gradually increasing amounts, without provoking vomiting or diarrhoea. It is best to begin with liquid formula, as it is easy to feed and measure the intake. Initially the child may refuse the feeds due to lack of appetite. As the appetite improves and child starts taking food by mouth,solid supplements can be introduced. The diet should be given frequently and in small amounts.

High energy intakes (150Kcal/kg) and high protein intakes (3-4g/kg) are required for rapid recovery. Most hospitals use milk-based formulas for feeding malnourished children. Either fresh milk or skimmed milk can be used for preparing the formula. Sugar and vegetable oil are added to increase the energy content. In older children, an entirely liquid diet is not necessary as they can accept solid foods. A mixed cereal-based diet can be given with added oil to increase energy density. Withthis treatment, clinical improvement is seen within a week. The child becomes alert and the appetite improves, Oedema disappears in about 7 -10 days. During this period, there may be some weight loss, but thereafter, the child starts gaining weight . After the child is discharged form the hospital, he should be followed up in the out-patient clinic or at home till he reaches normal weight for height.