Acute kidney injury (AKI) is a common periopera-tive problem. It occurs in 1–5% of all hospitalized patients and is a major contributor to increased hos-pital length of stay, markedly increasing morbidity, mortality, and cost of care. Patients may develop AKI and kidney failure secondary to intrinsic kid-ney disease (Table29–2). Risk factors for AKI in the perioperative setting include preexisting renal impairment, diabetes mellitus, cardiovascular dis-ease, hypovolemia, and use of potentially nephro-toxic medication by elderly patients. The risk index in Table29–3 identifies preoperative predictors of AKI following general surgery.

Clinical studies attempting to define the effects of anesthetic agents on renal function are compli-cated and difficult. However, several conclusions can be stated:

·        Reversible decreases in RBF, GFR, urinaryflow, and sodium excretion occur during both regional and general anesthesia.

·        Such changes are usually less pronounced during regional anesthesia.

·        Most of these changes are indirect and are mediated by autonomic and hormonal responses to surgery and anesthesia.

·        AKI is less likely when an adequate intravascular volume and a normal blood pressure are maintained.

·        There is no evidence that currently utilized vapor anesthetic agents cause AKI in patients. However, several studies have reported that compound A, a breakdown product of sevoflurane, produces renal toxicity when administered at low flow rates in laboratoryanimals. 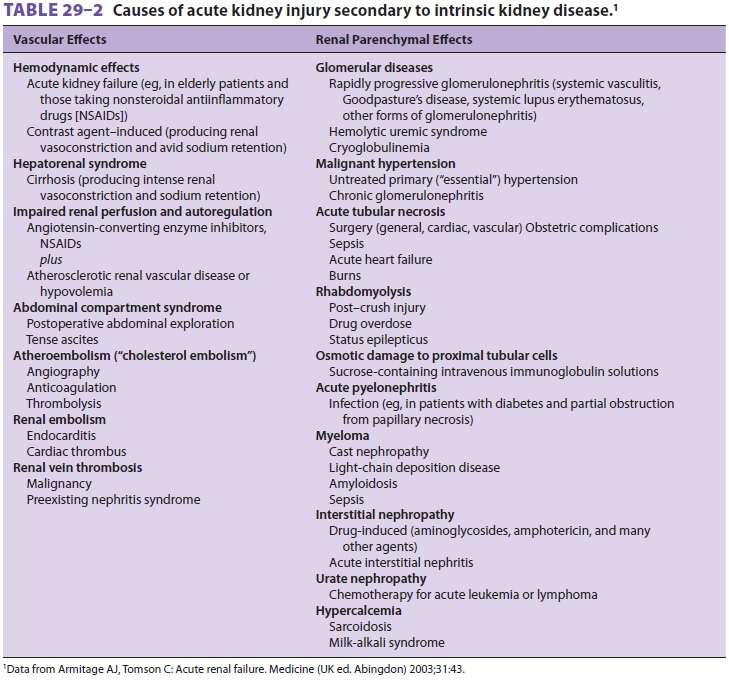 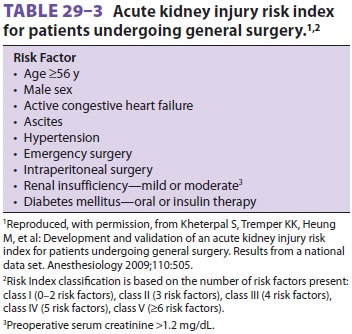 Most inhalation and intravenous anesthetics pro-duce concentration-dependent cardiac depression or vasodilation; therefore they are capable of decreas-ing systemic blood pressure. Depending on the level of sympathetic blockade, spinal or epidural anes-thesia may cause a drop in systemic blood pressure secondary to decreased cardiac output as a result of decreased sympathetic tone. This leads to increased pooling of blood and decreased systemic vascular resistance, decreased heart rate, and decreased car-diac output. Decreases in blood pressure below the limits of autoregulation reduce RBF, GFR, urinary flow, and sodium excretion, and this adverse impact on renal function can be reversed by administration of pressor agents and intravenous fluids.

Endocrine changes during sedation and general anesthesia are a component of the stress response induced by factors that may include anxiety, pain, surgical stimulation, circulatory depression, hypoxia, acidosis, and hypothermia. Increases in epinephrine and norepinephrine, renin, angiotensin II, aldosterone, ADH, adrenocortico-tropic hormone, and cortisol are common. Cate-cholamines, ADH, and angiotensin II all reduce RBF by inducing renal arterial constriction. Aldosterone enhances sodium reabsorption in the distal tubule and collecting tubule, resulting in sodium retention and expansion of the extracellular fluid compart-ment. Nonosmotic release of ADH also favors water retention and may result in hyponatremia. The endocrine response to surgery and anesthesia is at least partly responsible for transient fluidretention seen postoperatively in many patients.

The direct effects of anesthetics on renal function are minor compared with the secondary effects described above.

Halothane, sevoflurane, desflurane, and isoflurane decrease renal vascular resistance. As previ-ously noted, compound A, a breakdown product of sevoflurane, has been shown to cause renaldamage in laboratory animals. Its accumulation in the breathing circuit is favored by low flow rates. No clinical study has detected significant renal injury in humans during sevoflurane anesthesia; nonetheless, some regulatory authorities recommend fresh gas flow of at least 2 L/min with sevoflurane to prevent this theoretical problem.

Opioids and propofol exhibit minor, if any, effects on the kidney when used alone. Ketamine mini-mally affects renal function and may, relative to other anesthetic agents, preserve renal function during hemorrhagic hypovolemia. Agents with α-adrenergic blocking activity may prevent cate-cholamine-induced redistribution of RBF. Drugs with antidopaminergic activity—such as metoclo-pramide, phenothiazines, and droperidol—may impair the renal response to dopamine. Inhibition of prostaglandin synthesis by NSAIDs such as ketoro-lac prevents renal production of vasodilatory pros-taglandins in patients with high levels of angiotensinand norepinephrine; attenuation of prostaglandin synthesis in this setting may result in AKI. ACE inhibitors block the protective effects of angioten-sin II and may result in reductions in GFR during anesthesia.

Many medications, including radiocontrast agents, used in the perioperative period can adversely affect renal function, particularly in the setting of preex-isting renal dysfunction (Table29–4). Mechanisms of injury include vasoconstriction, direct tubular injury, drug-induced immunological and inflamma-tory responses, and renal microvascular or tubular obstruction. In addition to intravenous hydration, pretreatment with N-acetylcysteine (600 mg orally every 12 h in four doses beginning prior to contrast administration) has been shown to decrease the risk of radiocontrast agent–induced AKI in patients with preexisting renal dysfunction. N-Acetylcysteine’s protective action may be due to its free radical scavenging or sulfhydryl donor (reducing) prop-erties. Fenoldopam, mannitol, loop diuretics, and low-dose dopamine infusion do not help maintain 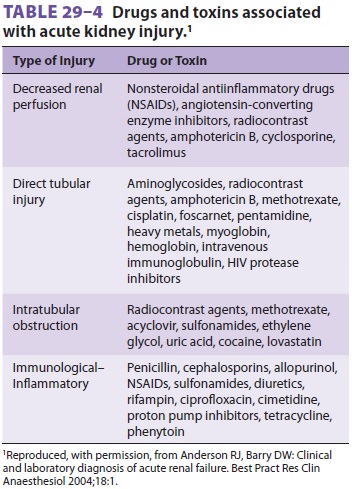 renal function or confer protection against AKI, and N-acetylcysteine has not been shown to be protec-tive in the perioperative setting except in patients who receive radiocontrast dyes.

Other surgical procedures that can signifi-cantly impair renal function include cardiopulmo-nary bypass , cross-clamping of the aorta , and dissection near the renal arteries .