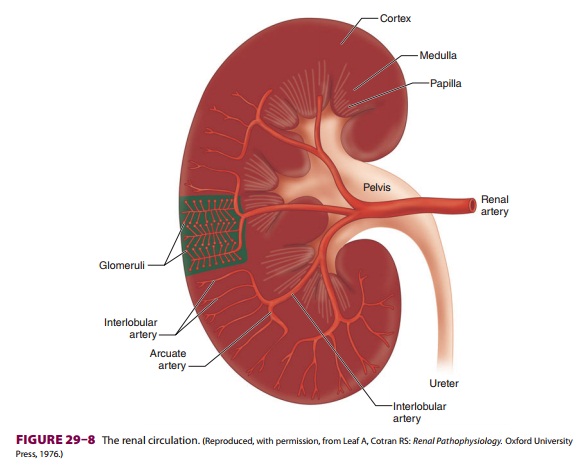 Renal function is intimately related to renal blood flow (RBF). In fact, the kidneys are the only organs for which oxygen consumption is determined by blood flow; the reverse is true in other organs. The combined blood flow through both kid-neys normally accounts for 20–25% of total cardiac output. Approximately 80% of RBF normally goes to cortical nephrons, and only 10–15% goes to juxta-medullary nephrons. The renal cortex extracts rela-tively little oxygen, having an oxygen tension of about 50 mm Hg, because of the relatively high blood flow with a mostly filtration function. In con-trast, the renal medulla maintains high metabolic activity because of solute reabsorption and requires low blood flow to maintain high osmotic gradients. The medulla has an oxygen tension of only about 15 mm Hg and is relatively vulnerable to ischemia.

Redistribution of RBF away from cortical neph-rons with short loops of Henle to larger juxtamedul-lary nephrons with long loops occurs under certain conditions. Sympathetic stimulation, increased levels of catecholamines and angiotensin II, and heart failure can cause redistribution of RBF to the medulla and is associated with sodium retention. 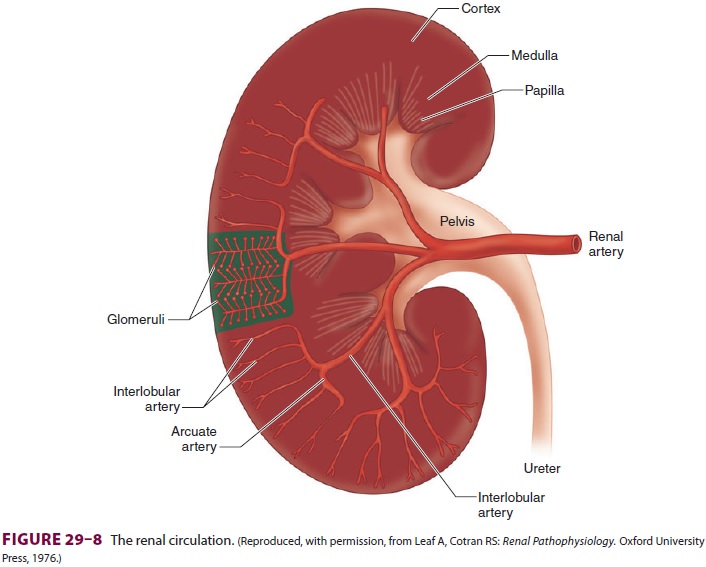 In most individuals, each kidney is supplied by a single renal artery arising from the aorta.The renal artery then divides at the renal pelvis into interlobar arteries, which in turn give rise to arcuate arteries at the junction between the renal cortex and medulla ( Figure29–8). Arcuate arter-ies further divide into interlobular branches that eventually supply each nephron via a single affer-ent arteriole. Blood from each glomerular capillary tuft is drained via a single efferent arteriole and then travels alongside adjacent renal tubules in a second peritubular system of capillaries. In contrast to the glomerular capillaries, which favor filtration, peritubular capillaries are primarily “reabsorptive.” Venules draining the second capillary plexus finally return blood to the inferior vena cava via a single renal vein on each side.