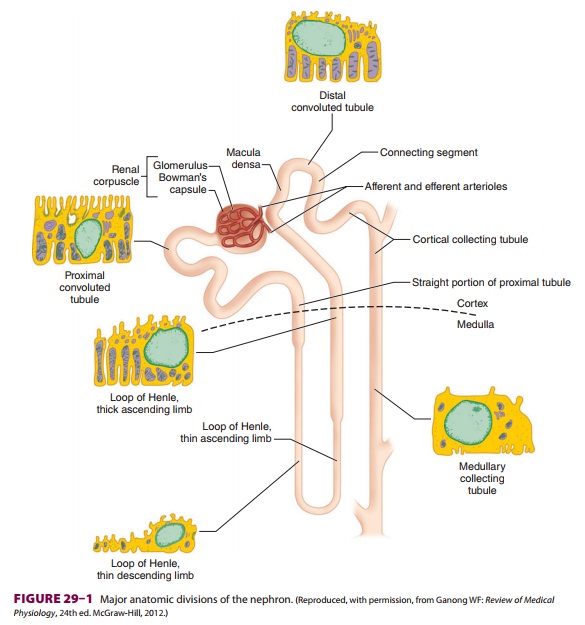 Each kidney is made up of approximately 1 million functional units called nephrons.

Each kidney is made up of approximately 1 million functional units called nephrons. Anatomically, a nephron consists of a tortuous tubule with at least six specialized segments. At its proximal end (the renal corpuscle, composed of a glomerulus anda Bowman’s capsule), an ultrafiltrate of blood is formed, and as this fluid passes through the neph-ron, its volume and composition are modified by both the reabsorption and the secretion of solutes. The final product is eliminated as urine. 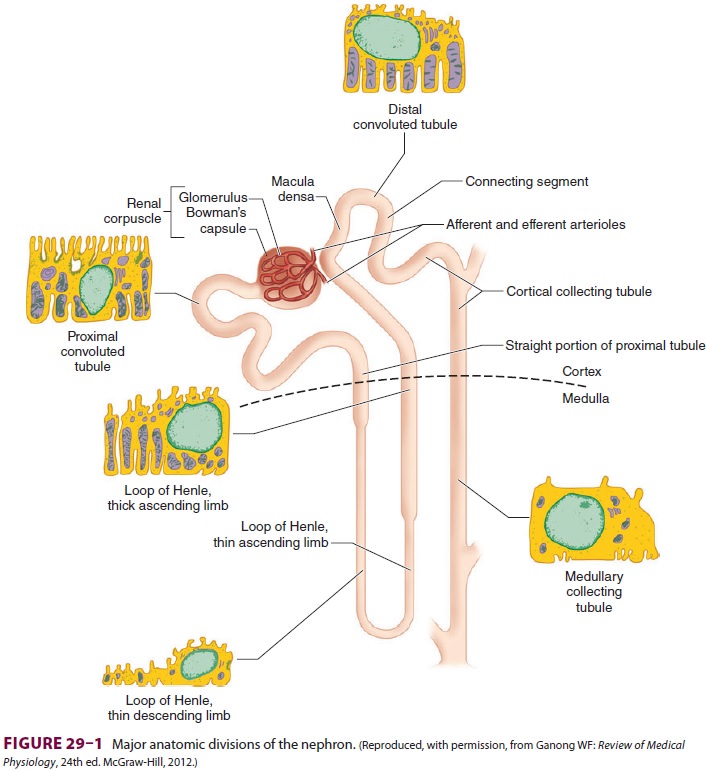 Each renal corpuscle contains a glomerulus, which is composed of tuf ts of capillaries that jut into Bowman’s capsule, providing a large surface area for the filtration of blood. Blood flow is provided by a single afferent arteriole and is drained by a sin-gle efferent arteriole . Endothelial cells of the glomeruli are separated from the epithelial cells of Bowman’s capsule only by their fused base-ment membranes. The endothelial cells are perfo-rated with relatively large fenestrae (70–100 nm), but the epithelial cells interdigitate tightly with one another, leaving relatively small filtration slits (about 25 nm). The two cell types with their base-ment membranes provide an effective filtration bar-rier to cells and large-molecular-weight substances. This barrier has multiple anionic sites that give it a net negative charge, favoring filtration of cations relative to anions. A third cell type, called intraglo-merular mesangial cells, is located between the base-ment membrane and epithelial cells near adjacent capillaries. These contractile cells regulate glomeru-lar blood flow and also exhibit phagocytic activity. They secrete various substances, absorb immune complexes, and contain contractile proteins that respond to vasoactive substance. Mesangial cells contract, reducing glomerular filtration, in response to angiotensin II, vasopressin, norepinephrine, his-tamine, endothelins, thromboxane A2, leukotrienes (C4 and D4), prostaglandin F2, and platelet-acti-vating factor. They relax, thereby increasing glo-merular filtration, in response to atrial natriuretic peptide (ANP), prostaglandin E2, and dopaminer-gic agonists.

Of the ultrafiltrate formed in Bowman’s capsule 65–75% is normally reabsorbed isotonically (pro-portional amounts of water and sodium) in the proximal renal tubules (Figure29–2). To be reab-sorbed, most substances must first traverse the tubular (apical) side of the cell membrane, and then cross the basolateral cell membrane into the renal interstitium before entering peritubular capillaries. The major function of the proximal tubule is Na + reabsorption. Sodium is actively transported out of proximal tubular cells at their capillary side by membrane-bound Na+–K+-adenosine triphospha-tase (Na+–K+-ATPase) (Figure29–3). The result-ing low intracellular concentration of Na + allows passive movement of Na+ down its gradient from tubular fluid into epithelial cells. Angiotensin II and norepinephrine enhance Na+ reabsorption in the 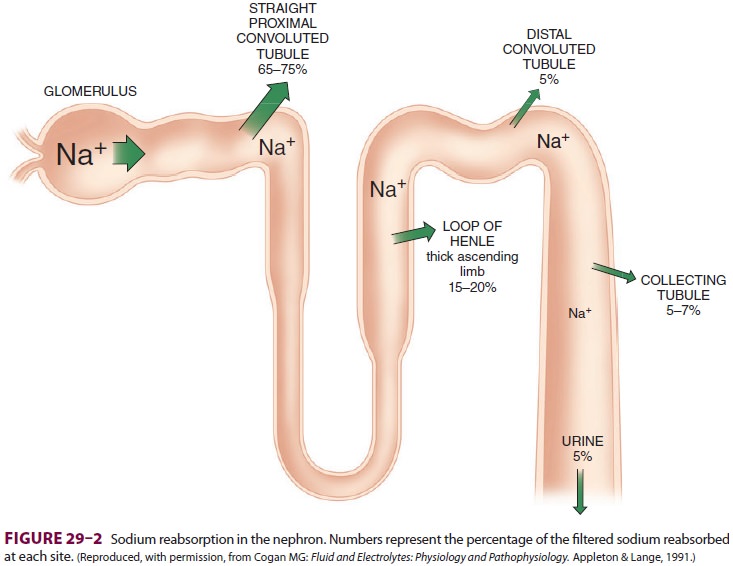 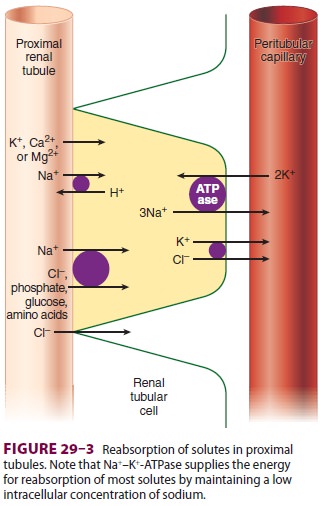 Sodium reabsorption is coupled with the reabsorption of other solutes and the secretion of H+ (Figure 29–3). Specific carrier proteins use the low concentration of Na+ inside cells to transport phosphate, glucose, and amino acids. The net loss of intracellular positive charges, the result of Na +–K+-ATPase activity (exchanging 3Na + for 2K+), favors the absorption of other cations (K +, Ca2+, and Mg2+). Thus, the Na+–K+-ATPase at the basolateral side of the renal cells provides the energy for the reab-sorption of most solutes. Sodium reabsorption at the luminal membrane is also coupled with coun-tertransport (secretion) of H +. The latter mecha-nism is responsible for reabsorption of 90% of the filtered bicarbonate ions (see Figure 50–3). Unlike other solutes, chloride can traverse the tight junc-tions between adjacent tubular epithelial cells, and accordingly, is passively resorbed via its concentra-tion gradient. Active chloride reabsorption may also take place as a result of a K+–Cl– cotransporter that extrudes both ions at the capillary side of the cell membrane (Figure 29–3). Water moves pas-sively out the proximal tubule along osmotic gra-dients. Apical membranes of epithelial cells contain specialized water channels, composed of a mem-brane protein called aquaporin-1, that facilitate water movement.

The proximal tubules are capable of secreting organic cations and anions. Organic cations such as creatinine, cimetidine, and quinidine may share the same pump mechanism and thus can compete for excretion with one another. Organic anions such as urate, ketoacids, penicillins, cephalosporins, diuret-ics, salicylates, and most radiocontrast dyes also share common secretory mechanisms. Both pumps probably play a major role in the elimination of many circulating toxins. Low-molecular-weight proteins, which are filtered by glomeruli, are normally reab-sorbed by proximal tubular cells, to be metabolized intracellularly.

The Loop of Henle

The loop of Henle consists of descending and ascending portions. They are responsible for 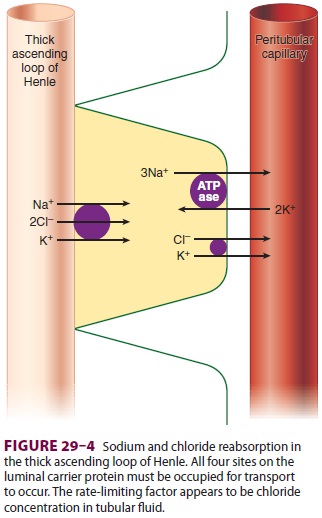 maintaining a hypertonic medullary interstitium and also indirectly provide the collecting tubules with the ability to concentrate urine. The thin descending segment is a continuation of the proxi-mal tubule and descends from the renal cortex into the renal medulla. In the medulla, the descending portion acutely turns back upon itself and rises back up toward the cortex as the ascending por-tion. The ascending portion consists of a function-ally distinct, thin ascending limb, a medullary thick ascending limb, and a cortical thick ascending limb (Figure 29–1). Cortical nephrons have relatively short loops of Henle which extend only into the more superficial regions of the renal medulla and often lack a thin ascending limb. Juxtamedullary nephrons, which have renal corpuscles located near the renal medulla, possess loops of Henle that project deeply into the renal medulla. Cortical nephrons outnumber juxtamedullary nephrons by approximately 7:1.Only 25–35% of the ultrafiltrate formed in Bowman’s capsule normally reaches the loop of Henle. Once there, 15–20% of the filtered sodium load is normally reabsorbed in the loop of Henle. With the notable exception of the ascending thick segments, solute and water reabsorption in the loop of Henle is passive and follows concentration and osmotic gradients, respectively. In the ascending thick segment, however, Na+ and Cl − are reabsorbed in excess of water; moreover, Na+ reabsorption in this part of the nephron is directly coupled to both K+ and Cl − reabsorption (Figure 29–4), and [Cl−] in tubular fluid appears to be the rate-limiting factor. Active Na+ reabsorption still results from 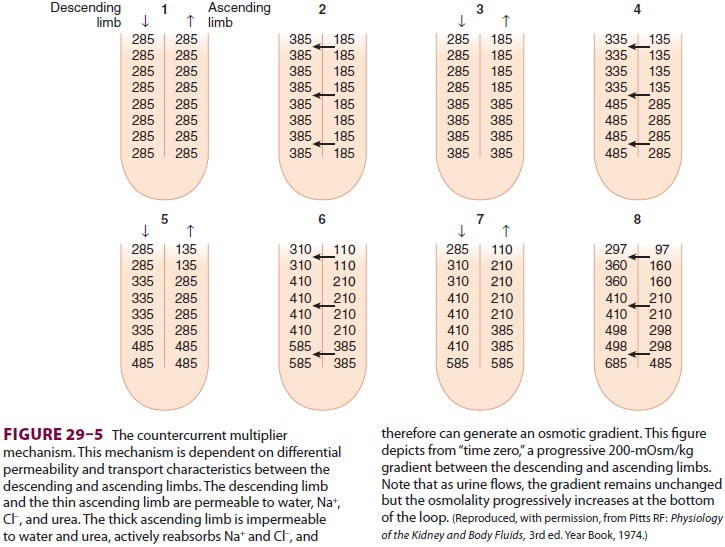 Unlike the descending limb and the thin ascending limb, the thick parts of the ascending limb are impermeable to water. As a result, tubular fluid flowing out of the loop of Henle is hypotonic (100– 200 mOsm/L) and the interstitium surrounding the loop of Henle is therefore hypertonic. A countercur-rent multiplier mechanism is established such that both the tubular fluid and medullary interstitium become increasingly hypertonic with increasing depth into the medulla ( Figure 29–5). Urea con-centrations also increase within the medulla and contribute to the hypertonicity. The countercurrent mechanism includes the loop of Henle, the cortical and medullary collecting tubules, and their respec-tive capillaries (vasarecta).

The thick ascending loop of Henle is also an important site for calcium and magnesium reabsorption, and parathyroid hormone may aug-ment calcium reabsorption at this location.

The distal tubule receives hypotonic fluid from the loop of Henle and is normally responsible for only minor modifications of tubular fluid. In contrast to more proximal portions, the distal nephron has very tight junctions between tubular cells and is relatively impermeable to water and sodium. It can there-fore maintain the gradients generated by the loop of Henle. Sodium reabsorption in the distal tubule normally accounts for only about 5% of the filtered sodium load. As in other parts of the nephron, the energy is derived from Na+–K+-ATPase activity on the capillary side, but on the luminal side Na + is reabsorbed by an Na +–Cl− carrier. Sodium reabsorp-tion in this segment is directly proportional to Na+ delivery. The distal tubule is the major site of para-thyroid hormone–and vitamin D–mediated calcium reabsorption.

The latter portion of the distal tubule is referred to as the connecting segment. Although it is also involved in hormone-mediated calcium reabsorp-tion, unlike more proximal portions, it participates in aldosterone-mediated Na+ reabsorption.

The collecting tubule can be divided into cortical and medullary portions. Together, they normally account for the reabsorption of 5–7% of the filtered sodium load.

Th is part of the nephron consists of two cell types:

principal cells (P cells), which primarily secrete potassium and participate in aldosterone-stimulated Na+ reabsorption, and (2) intercalated cells (I cells), which are responsible for acid–base regulation. Because P cells reabsorb Na+ via an electrogenic pump, either Cl− must also be reabsorbed or K+ must be secreted to maintain electroneutrality. Increased intracellular [K +] favors K+ secretion. Aldosterone enhances Na +–K+-ATPase activity in this part of the nephron by increasing the number of open K+ and Na+ channels in the luminal membrane. Aldosterone also enhances the H +-secreting ATPase on the lumi-nal border of I cells (Figure29–6). I cells addition-ally have a luminal K +–H+-ATPase pump, which reabsorbs K+ and secretes H+, and some I cells are capable of secreting bicarbonate ion in response to large alkaline loads. 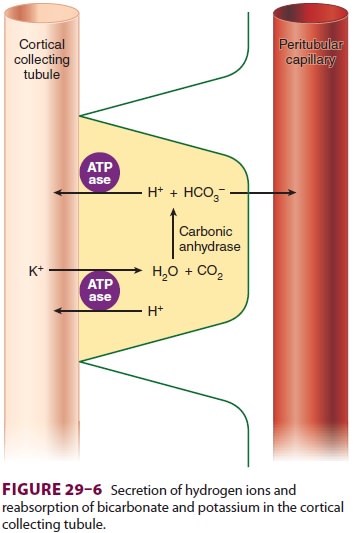 The medullary collecting tubule courses down from the cortex through the hypertonic medulla before joining collecting tubules from other nephrons to form a single ureter in each kidney. This part of the collecting tubule is the principal site of action for antidiuretic hormone (ADH), also called arginine vasopressin (AVP). ADH stimulates the expression of a water channel protein, aquaporin-2, in the cell membrane. The permeability of the luminal mem-brane to water is entirely dependent on the presence of ADH . Dehydration increases ADH secretion, rendering the luminal membrane permeable to water. As a result, water is osmotically drawn out of the tubular fluid passing through the medulla, resulting in production of concentrated urine (up to 1400 mOsm/L). Conversely, adequate hydration suppresses ADH secretion, allowing fluid in the collecting tubules to pass through the medulla relatively unchanged and to remain hypo-tonic (100–200 mOsm/L). This part of the nephron is responsible for acidifying urine; the hydrogen ions

This small organ within each nephron consists of a specialized segment of the afferent arteriole, con-taining juxtaglomerular cells within its wall, and the end of the thick, ascending cortical segment of the loop of Henle, the macula densa ( Figure29–7). Juxtaglomerular cells contain the enzyme renin and are innervated by the sympathetic nervous system. Release of renin depends on β1-adrenergic sympa-thetic stimulation, changes in afferent arteriolar wall 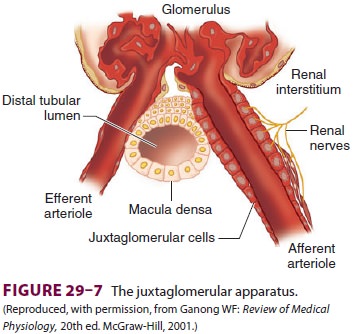 pressure , and changes in chloride flow past the macula densa. Renin released into the bloodstream catalyzes the conversion of angio-tensinogen, a protein synthesized by the liver, to angiotensin I. This inert decapeptide is then rapidly converted, primarily in the lungs, by angiotensin-converting enzyme (ACE) to form the octapeptide angiotensin II. Angiotensin II plays a major role in blood pressure regulation  and aldosterone secretion . Proximal renal tubular cells have converting enzyme as well as angiotensin II receptors. Moreover, intrarenal formation of angiotensin II enhances sodium reab-sorption in proximal tubules. Some extrarenal pro-duction of renin and angiotensin II also takes place in the vascular endothelium, the adrenal glands, and the brain.