Ecology is the study of the reciprocal relationship between living organisms and their environment.

The term “ecology” (oekologie) is derived from two Greek words oikos (meaning house or dwelling place and logos meaning study) It was first proposed by Reiter (1868). However, the most widely accepted definition of ecology was given by Ernest Haeckel (1869).

“The study of living organisms, both plants and animals, in their natural habitats or homes.” - Reiter (1885)

“Ecology is the study of the reciprocal relationship between living organisms and their environment.” - Earnest Haeckel (1889)

Ecology is mainly divided into two branches, they are autecology and synecology.

1.     Autecology is the ecology of an individual species and is also called species ecology.

2.     Synecology is the ecology of a population or community with one or more species and also called as community ecology.

Many advances and developments in the field ecology resulted in various new dimensions and branches. Some of the advanced fields are Molecular ecology, Eco technology, Statistical ecology and Environmental toxicology.

Habitat is a specific physical place or locality occupied by an organism or any species which has a particular combination of abiotic or environmental factors. But the environment of any community is called Biotope.

An ecological niche refers to an organism’s place in the biotic environment and its functional role in an ecosystem. The term was coined by the naturalist Roswell Hill Johnson but Grinell (1917) was probably first to use this term. The habitat and niche of any organism is called Ecotope

The differences between habitat and niche are as follows. 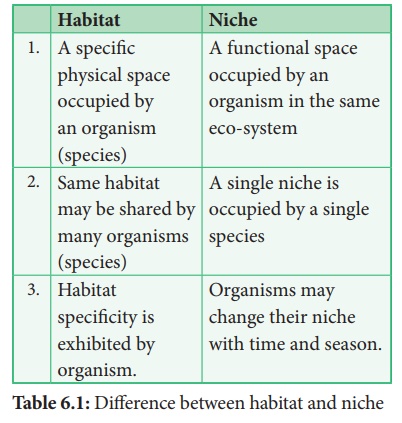 ·         Species of the grass lands of Western Ghats of India differ from the grass species of temperate grass lands of Steppe in North America. But they are all ecologically primary producers and fulfilling similar roles in their respective communities.