Dispersal of Fruits and Seeds

Both fruits and seeds possess attractive colour, odour, shape and taste needed for the dispersal by birds, mammals, reptiles, fish, ants and insects even earthworms.

Dispersal of Fruits and Seeds

Both fruits and seeds possess attractive colour, odour, shape and taste needed for the dispersal by birds, mammals, reptiles, fish, ants and insects even earthworms. The seed consists of an embryo, stored food material and a protective covering called seed coat. As seeds contain miniature but dormant future plants, their dispersal is an important criterion for distribution and establishment of plants over a wide geographical area. The dissemination of seeds and fruits to various distances from the parent plant is called seed and fruit dispersal. It takes place with the help of ecological factors such as wind, water and animals.

Seed dispersal is a regeneration process of plant populations and a common means of colonizing new areas to avoid seedling level competition and from natural enemies like herbivores, frugivores and pathogens.

Fruit maturation and seed dispersal is influenced by many ecologically favourable conditions such as Season (Example: Summer), suitable environment, and seasonal availability of dispersal agents like birds, insects etc.

Seeds require agents for dispersal which are crucial in plant community dynamics in many ecosystems around the globe. They offer many benefits to communities such as food and nutrients, migration of seeds across habitats and helps spreading plant genetic diversity.

The individual seeds or the whole fruit may be modified to help for the dispersal by wind. Wind dispersal of fruits and seeds is quite common in tall trees. The adaptation of the wind dispersal plants are 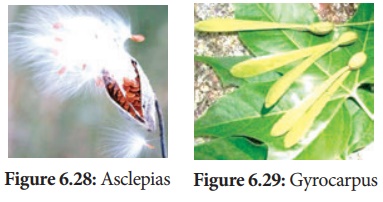 ·         Feathery Appendages: Seeds or fruits may have feathery appendages which greatly increase their buoyancy to disperse to high altitudes. Examples: Vernonia and Asclepias.

·         Censor mechanisms: The fruits of many plants open in such a way that the seeds can escape only when the fruit is violently shaken by a strong wind. Examples: Aristolochia and Poppy.

Dispersal of seeds and fruits by water usually occurs in those plants which grow in or near water bodies . Adaptation of hydrochory are

·         The fruit may be inflated. Examples: Heritiera littoralis.

·         Seeds by themselves would not float may be carried by water current. Example: Coconut.

Birds and mammals, including human beings play an efficient and important role in the dispersal of fruit and seeds. They have the following devices.

i. Hooked fruit: The surface of the fruit or seeds have hooks,(Xanthium), barbs (Andropogon), spines (Aristida) by means of which they adhere to the body of animals or clothes of human beings and get dispersed.

a. Some fruits have sticky glandular hairs by which they adhere to the fur of grazing animals. Example: Boerhaavia and Cleome.

b. Some fruits have viscid layer which adhere to the beak of the bird which eat them and when they rub them on to the branch of the tree, they disperse and germinate. Example: Cordia and Alangium

iii. Fleshy fruits: Some fleshy fruits with conspicuous colours are dispersed by human beings to distant places after consumption. Example: Mango and Diplocyclos

Some fruits burst suddenly with a force enabling to throw seeds to a little distance away from the plant. Autochory shows the following adaptations.

·         Mere touch of some plants causes the ripened fruit to explode suddenly and seeds are thrown out with great force. Example: Impatiens (Balsam), Hura.

·         Some fruits when they come in contact with water particularly after a shower of rain, burst suddenly with a noise and scatter the seeds.Examples: Ruellia and Crossandra.

·         As the fruit matures, tissues around seeds are converted into a mucilaginous fluid, due to which a high turgor pressure develops inside the fruit which leads to the dispersal of seeds.

Seed Ball : Seed ball is an ancient Japanese technique of encasing seeds in a mixture of clay and soil humus (also in cow dung) and scattering them on to suitable ground, not planting of trees manually. This method is suitable for barren and degraded lands for tree regeneration and vegetation before monsoon period where the suitable dispersal agents become rare. 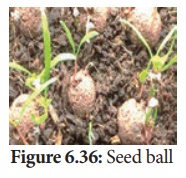 ·         Seeds escape from mortality near the parent plants due to predation by animals or getting diseases and also avoiding competition.

·         It is an important process in the movement of plant genes particularly this is the only method available for self-fertilized flowers and maternally transmitted genes in outcrossing plants.

·         Seed dispersal by animals help in conservation of many species even in human altered ecosystems.

·         Understanding of fruits and seed dispersal acts as a key for proper functioning and establishment of many ecosystems from deserts to evergreen forests and also for the maintenance of biodiversity conservation and restoration of ecosystems.