They are classified as hydrophytes, xerophytes, mesophytes, epiphytes and halophytes.

The modifications in the structure of organisms to survive successfully in an environment are called adaptations of organisms. Adaptations help the organisms to exist under the prevailing ecological habitat. Based on the habitats and the corresponding adaptations of plants, they are classified as hydrophytes, xerophytes, mesophytes, epiphytes and halophytes.

i.            Free floating hydrophytes: These plants float freely on the surface of water. They remain in contact with water and air, but not with soil. Examples: Eichhornia, Pistia and Wolffia (smallest flowering plant).

ii.            Rooted floating hydrophytes: In these plants, the roots are fixed in mud, but their leaves and flowers are floating on the surface of water. These plants are in contact with soil, water and air. Examples: Nelumbo, Nymphaea, Potomogeton and Marsilea. 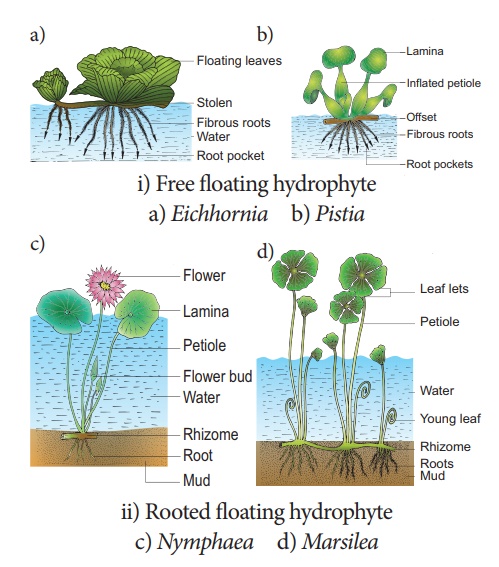 iii.            Submerged floating hydrophytes: These plants are completely submerged in water and not in contact with soil and air. Examples: Ceratophyllum and Utricularia.

iv.            Rooted- submerged hydrophytes: These plants are completely submerged in water and rooted in soil and not in contact with air. Examples: Hydrilla, Vallisneria and Isoetes.

v.            Amphibious hydrophytes (Rooted emergent hydrophytes): These plants are adapted to both aquatic and terrestrial modes of life. They grow in shallow water. Examples: Ranunculus, Typha and Sagittaria. 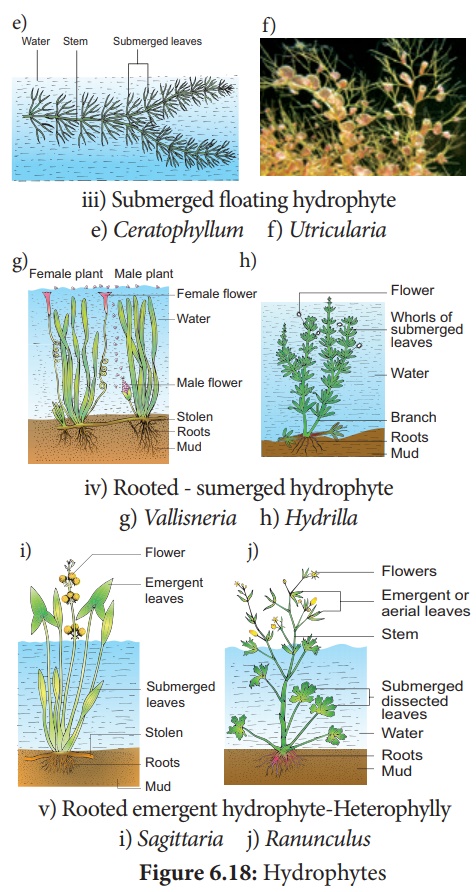 ·         Roots are totally absent in Wolffia and Salvinia or poorly developed in Hydrilla or well developed in Ranunculus.

·         The root caps are replaced by root pockets. Example: Eichhornia

·         In free floating forms the stem is thick, short stoloniferous and spongy; and in rooted floating forms, it is a rhizome .

·        The leaves are thin, long and ribbon shaped in Vallisneria or long and linear in Potamogeton or finely dissected in Ceratophyllum

·        The floating leaves are large and flat as in Nymphaea and Nelumbo. In Eichhornia and Trapa petioles become swollen and spongy.

·        In emergent forms, the leaves show heterophylly (Submerged leaves are dissected and aerial leaves are entire).

·        Cortex is well developed with aerenchyma

·        Mechanical tissues are generally absent except in some emergent forms. Pith cells are sclerenchymatous. 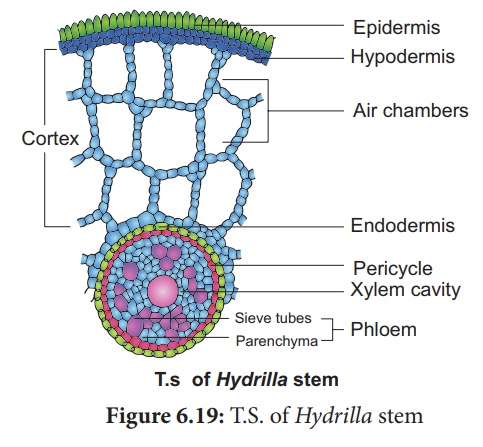 ·         Hydrophytes have the ability to withstand anaerobic conditions .

The plants which are living in dry or xeric condition are known as Xerophytes. Xerophytic habitat can be of two different types. They are:

a. Physical dryness: In these habitats, soil has a little amount of water due to the inability of the soil to hold water because of low rainfall.

b. Physiological dryness: In these habitats, water is sufficiently present but plants are unable to absorb it because of the absence of capillary spaces. Example: Plants in salty and acidic soil.

Based on adaptive characters xerophytes are classified into three categories. They are Ephemerals, Succulents and Non succulent plants.

i. Ephemerals: These are also called droughtescapers or drought evaders. These plants complete their life cycle within a short period (single season). 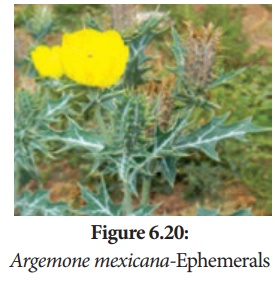 iii. Non succulents: These are also called drought resistant plants ( true xerophytes). They face both external and internal dryness. They have many adaptations to resist dry conditions. Examples: Casuarina, Nerium, Zizyphus and Acacia. 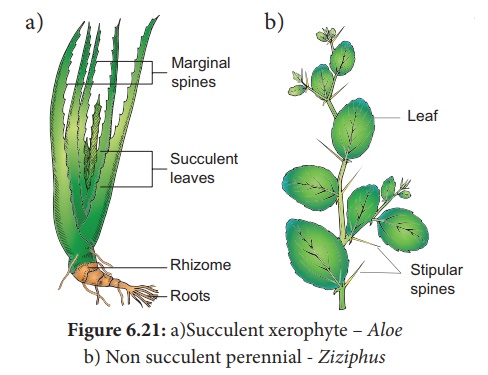 ·        Root system is well developed and is greater than that of shoot system.

In Xerophytic plants with the leaves and stem are covered with hairs are called trichophyllous plants . Example: Cucurbits (Melothria and Mukia )

• Stems are mostly hard and woody. They may be aerial or underground

• In some xerophytes all the internodes in the stem are modified into a fleshy leaf structure called phylloclades (Opuntia) .

• In some of the others single or occasionally two internodes modified into fleshy green structure called cladode (Asparagus).

In some the petiole is modified into a fleshy leaf like structure called phyllode (Acacia melanoxylon). 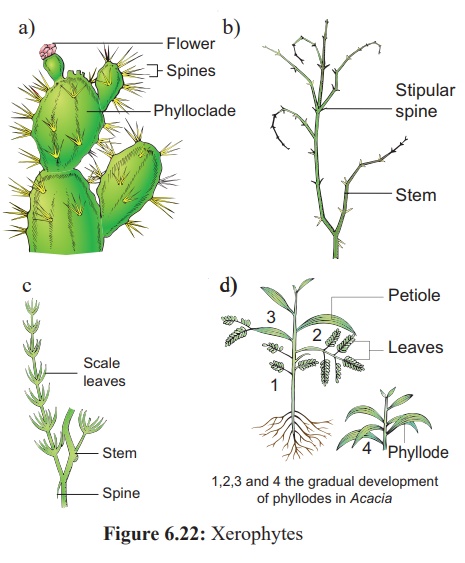 a)     A succulent xerophyte: Phylloclade – opuntia

·         Leaves are generally leathery and shiny to reflect light and heat.

·         In some plants like Euphorbia, Acacia, Ziziphus and Capparis, the stipules are modified into spines.

·         The entire leaves are modified into spines (Opuntia ) or reduced to scales (Asparagus).

·         Presence of multilayered epidermis with heavy cuticle to prevent water loss due to transpiration.

·         Sunken shaped stomata are present only in the lower epidermis with hairs in the sunken pits.

·         Mesophyll is well differentiated into palisade and spongy parenchyma.

·         In succulents the stem possesses a water storage region. 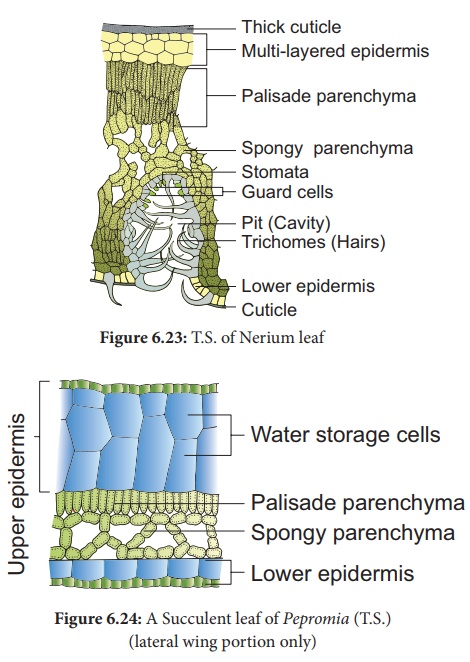 ·         Most of the physiological processes are designed to reduce transpiration.

The plants which are living in moderate conditions (neither too wet nor too dry) are known as mesophytes. These are common land plants. Example: Maize and Hibiscus.

·         Epidermis is well developed and stomata are generally present on both the epidermis.

·         Mesophyll is well differentiated into palisade and spongy parenchyma.

·         Vascular and mechanical tissues are fairly developed and well differentiated.

·         Temporary wilting takes place at room temperature when there is water scarcity.

Tropophytes are plants which behave as xerophytes at summer and behave as mesophytes (or) hydrophytes during rainy season.

Epiphytes are plants which grow perched on other plants (Supporting plants). They use the supporting plants only as shelter and not for water or food supply. These epiphytes are commonly seen in tropical rain forests. Examples: Orchids, Lianas, Hanging Mosses and Money plant.

·         Root system is extensively developed. These roots may be of two types. They are Clinging roots and Aerial roots.

Clinging roots fix the epiphytes firmly on the surface of the supporting objects.

Aerial roots are green coloured roots which may hang downwardly and absorb moisture from the atmosphere with the help of a spongy tissue called velamen.

·         Stem of some epiphytes are succulent and develop pseudo bulb or tuber.

·         Myrmecophily is a common occurrence in the epiphytic vegetation to prevent the predators.

·         The fruits and seeds are very small and usually dispersed by wind, insects and birds.

·         Multilayered epidermis is present. Inner to the velamen tissue, the peculiar exodermis layer is present. 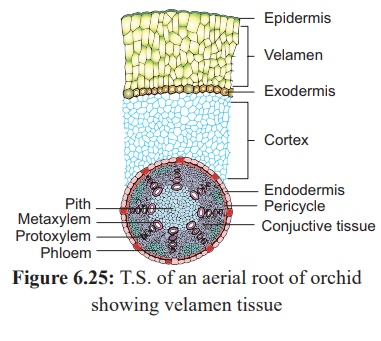 There are special type of Halophytic plants which grow on soils with high concentration of salts. Examples: Rhizophora, Sonneratia and Avicennia.

Halophytes are usually found near the sea-shores and Estuaries. The soils are physically wet but physiologically dry. As plants cannot use salt water directly they require filtration of salt using physiological processes. This vegetation is also known as mangrove forest and the plants are called mangroves.

·         In addition to the normal roots, many stilt roots are developed

·         A special type of negatively geotropic roots called pneumatophores with pneumathodes to get sufficient aeration are also present. They are called breathing roots. Example: Avicennia 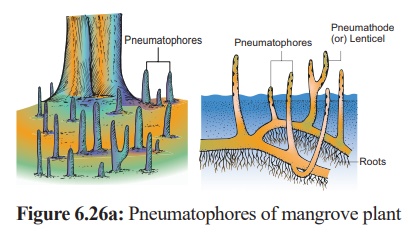 ·         Leaves are thick, entire, succulent and glossy. Some species are aphyllous (without leaves).

·         Vivipary mode of seed germination is found in halophytes 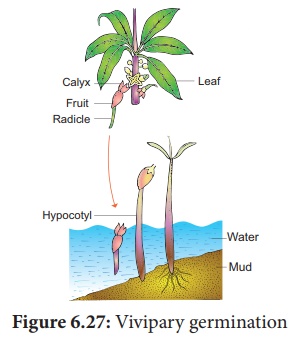 ·         Epidermal cells of stem is heavy cutinized, almost squarish and are filled with oil and tannins.

·         ‘Star’ shaped sclereids and ‘H’ shaped heavy thickened spicules that provide mechanical strength to cortex are present in the stem.

·         The leaves may be dorsiventral or isobilateral with salt secreting glands.

·         Seeds germinate in the fruits of mother plant itself (Vivipary).