1. Arrange the correct sequence of ecological hierarchy starting from lower to higher level.

2. Ecology is the study of an individual species is called

d) ii and iii only

3. A specific place in an ecosystem, where an organism lives and performs its functions is

4. Read the given statements and select the correct option.

i) Hydrophytes possess aerenchyma to support themselves in water.

ii) Seeds of Viscum are positively photoblastic as they germinate only in presence of light.

iii) Hygroscopic water is the only soil water available to roots of plant growing in soil as it is present inside the micropores.

iv) High temperature reduces use of water and solute absorption by roots.

c) ii and iii only

5. Which of the given plant produces cardiac glycosides?

6. Read the given statements and select the correct option.

i) Loamy soil is best suited for plant growth as it contains a mixture of silt, sand and clay.

ii) The process of humification is slow in case of organic remains containing a large amount of lignin and cellulose.

iii) Capillary water is the only water available to plant roots as it is present inside the micropores.

iv) Leaves of shade plant have more total chlorophyll per reaction centre, low ratio of chl a and chl b are usually thinner leaves.

d) ii and iii only

7. Read the given statements and select the correct option.

Statement A : Cattle do not graze on weeds of Calotropis.

Statement B : Calotropis have thorns and spines, as defense against herbivores.

a) Both statements A and B are incorrect.

b) Statement A is correct but statement B is incorrect.

c) Both statements A and B are correct but statement B is not the correct explanation of statement A.

d) Both statements A and B are correct and statement B is the correct explanation of statement A.

8. In soil water available for plants is

9. Read the following statements and fill up

the blanks with correct option.

10. Column I represent the size of the soil particles and Column II represents type of soil components. Which of the following is correct match for the Column I and Column IL

11. The plant of this group are adapted to live partly in water and partly above substratum and free from water

13. Ophrys an orchid resembling the female of an insect so as to able to get pollinated is due to phenomenon of

a) Serving as a plant growth regulators

b) Absorbing inorganic ions from soil

d) Protecting the plant from infection

17. Which of the following plant has a non-succulent xerophytic and thick leathery leaves with waxy coating

18. In a fresh water environment like pond, rooted autotrophs are

a) Nymphaea and typha

b) Ceratophyllum and Utricularia

19. Match the following and choose the correct combination from the options given below: 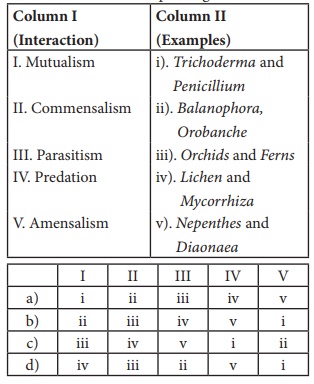 20. Strong, sharp spines that get attached to animal’s feet are found in the fruits of