Earthquake - Disaster and Rules of actions during disasters

An earthquake is sudden, rapid shaking of the ground caused by the shifting of rocks beneath the earth’s surface.

Disasters and Rules of actions during disasters

An earthquake is sudden, rapid shaking of the ground caused by the shifting of rocks beneath the earth’s surface. Earthquakes strike suddenly without warning and can occur at anytime. The impacts of the earthquakes include deaths, injuries and damage of property. You have learned about occurrence of the earthquake and other related information in the earlier part of the book.

The April 2015 Nepal Earthquake (also known as the Gorkha Earthquake) killed nearly 9,000 people and injured nearly 22,000. It occurred on 25 April, with a magnitude of 8.1 Richter scale. Its epicentre was east of Gorkha District at Barpak. It was the worst natural disaster to strike Nepal since 1934 Nepal–Bihar earthquake. 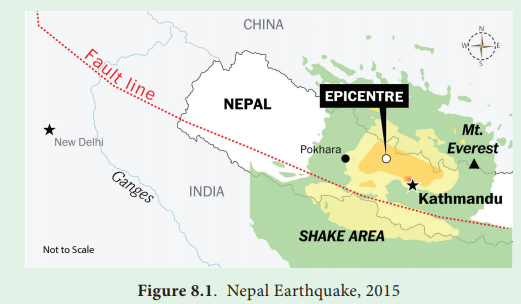 In case we are inside the class when earthquake occurs, instruct loudly “earth quake position – drop, cover, and hold on”. Drop down on your knee. Cover your head, neck and face. Go under a table to protect your head.

Rules of actions during an earthquake:

2.        If you are in a building, sit down on the floor under a table or any other furniture and firmly hold on to it until the earthquake has stopped.

3.        If there is no table nearby, cover your face and head with your hands and sit on the floor in a corner of the room.

4.        Keep away from glass windows, glass doors and things that can fall down.

5.        Do not try to leave the building quickly; during earthquakes people mostly die because they try to run out of the building and become trapped under ruins if the building is destroyed.

7.        If you are in the street, keep away from buildings; try to get into an open space and avoid power transmission lines.

9.        If you are in chemistry class or a laboratory where chemicals are stored, try to leave the room because chemicals may cause injuries;

1.        First check if you have any injuries, and then check the condition of the surrounding people. If you cannot do this, wait for the rescue team;

2.        After the earthquake when you leave the shelter, do not return for 2-3 hours because the quakes may repeat (an aftershock).

4.        Be cautious about the possibility of gas leakage and damage caused to electrical wiring.

5.        Be careful while opening wardrobe doors to take necessary items;

7.        Listen to the radio to receive information about the earthquake.