A drainage system is an integrated system of tributaries and a trunk stream which collects and drains surface water into the sea, lake or some other body of water.

A drainage system is an integrated system of tributaries and a trunk stream which collects and drains surface water into the sea, lake or some other body of water. The total area drained by a river and its tributaries is known as a drainage basin. The drainage pattern of an area is the result of the geological structure of the respective areas. The drainage system of India is broadly divided into two major groups on the basis of their location. They are Himalayan rivers and the Peninsular rivers. 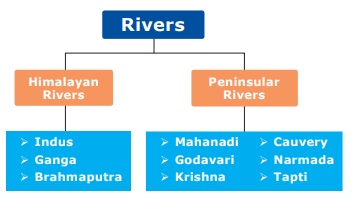 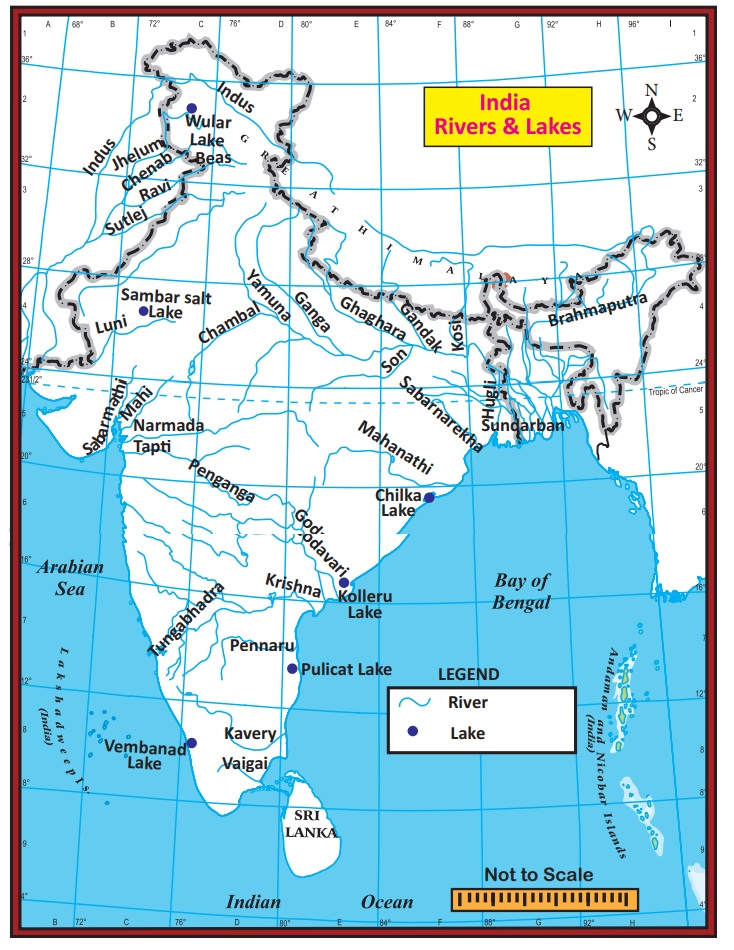 These rivers are found in north India and originate from Himalayas. So, they are also called as Himalayan rivers. These are perennial rivers.

a) The Indus River System

The Indus River is one of the largest rivers of the world. It originates from the northern slope of the Kailash range in Tibet near Manasarovar Lake at an elevation of about 5,150 m. Its length is about 2,880 km (Only 709 km is in India). The river has a total drainage area extending 11,65,500 sq km in which 321,289 sq km areas are drained in India. The river flows through the Ladakh and Zaskar ranges and creates deep gorges. The river runs through Jammu and Kashmir, turns south near Chillar and enters Pakistan. Its major tributaries are Jhelum, Chenab (Largest tributary of Indus), Ravi, Beas and Sutlej. It enters into with the Arabian Sea.

b) The Ganga River System

The Ganga River system is the largest drainage system of India. It extends over an area of 8,61,404 sq km. The Ganga plain is the most densely populated place in India and many towns are developed on the banks of this river. The river Ganga originates as Bhagirathi from the Gangotri Glacier in Uttar Khasi District of Uttarkhand state, at an elevation of 7,010 m.

The length of the river Ganga is about 2,525 km. Its major tributaries from the north are Gomti, Gandak, Kosi and Ghaghra and from south, Yamuna (largest tributary of Ganga), Son, Chambal etc. The river Ganga is known as the River Padma in Bangladesh. The combined river of Ganga and Brahmaputra creates the World’s largest delta known as Sundarbans in Bangladesh before joining the Bay of Bengal.

The river Brahmaputra originates from the Chemayungdung Glacier of the Kailash range to the east of Lake Manasarovar in Tibet at an elevation of about 5,150 m. The total area is about 5,80,000 sq km but the drainage area found in India is 1,94,413 sq km This river is known as Tsangpo (Purifier) in Tibet. The length of this river is about 2,900 km (900 km in India). It enters into India through a gorge in Arunachal Pradesh namely Dihang. It has many tributaries. Tista, Manas, Barak, Subansiri are some of them. This river is called as Jamuna in Bangladesh. After it joins with the river Ganga in Bangladesh, the river is called as Meghna.

4. Middle and lower courses are navigable

The rivers in south India are called the Peninsular rivers. Most of these rivers originate from the Western Ghats. These are seasonal rivers (non–perennial). They have a large seasonal fluctuation in volume of water as they are solely fed by rain. These rivers flow in valleys with steep gradients. Based on the direction of flow, the peninsular rivers are divided into the

The river Mahanadi originates near Sihawa in Raipur district of Chattisgarh and flows through Odisha. Its length is 851 km. Seonath, Telen, Sandur and Ib are its major tributaries. The main stream of Mahanadi gets divided into several distributaries such as Paika, Birupa, Chitartala, Genguti and Nun. All these distributaries form the Delta of Mahanadi which is one of the largest deltas in India. The Mahanadi empties its water in Bay of Bengal.

Godavari is the longest river (1,465 km) with an area of 3.13 lakh km2 among the Peninsular rivers. It is also called Vridha Ganga. It originates in Nasik district of Maharashtra, a portion of Western Ghats. It flows through the states of Telangana and Andhra Pradesh before joining Bay of Bengal. Purna, Penganga, Pranitha, Indravati, Tal and Salami are its major tributaries. The river near Rajahmundry gets divided into two Channels called Vasistha and Gautami and forms one of the largest deltas in India. Kolleru, a fresh water lake is located in the deltaic region of the Godavari.

The river Krishna originates from a spring at a place called Mahabaleshwar in the Western Ghats of Maharashtra. Its length is 1,400 km and an area of 2.58 lakh sq km. It is the second longest Peninsular river Bhima, Peddavagu, Musi, Koyna and Thungabhadra are the major tributaries of this river. It also flows through Andhra Pradesh and joins in Bay of Bengal, at Hamasaladeevi.

The river Kaveri originates at Talakaveri, Kudagu hills of Karnataka. Its length is 800 km. The river kaveri is called Dhakshin Ganga or Ganga of south. In Karnataka the river bifurcates twice, forming the sacred islands of Srirangapatnam and Sivasamudram. While entering Tamil Nadu, the Kaveri continues through a series of twisted wild gorges until it reaches Hogenakkal Falls and flows through a straight, narrow gorge near Salem. The Kaveri breaks at Srirangam Island with two channels, river Coleroon and Kaveri. At last, it empties into the Bay of Bengal at Poompuhar.

This river rises in Amarkantak Plateau in Madhya Pradesh at an elevation of about 1057 m and flows for a distance of about 1,312 km. It covers and area of 98,796 sq km and forms 27 km long estuary before outfalling into the Arabian Sea through the Gulf of Cambay. It is the largest among the west flowing rivers of Peninsular India. Its principal tributaries are Burhner, Halon, Heran, Banjar, Dudhi, Shakkar, Tawa, Barna and Kolar.

The Tapti is one of the major rivers of Peninsular India with the length of about 724 km. It covers an area of 65,145 sq km. Tapti river rises near Multai tank in the Betul district of Madhya Pradesh at an elevation of about 752 m. It is one of only the three rivers in Peninsular India that run from east to west - the others being the Narmada and the Mahi. The major tributaries are Vaki, Gomai, Arunavati, Aner, Nesu, Buray, Panjhra and Bori. It outfalls into the Arabian Sea through the Gulf of Cambay.

In which river the Gerosappa (jog) fall is found?

5. Not useful for navigation