The ethical dilemmas a nurse may encounter in the medical-surgical arena are numerous and diverse.

The ethical dilemmas a nurse may encounter in the medical-surgical arena are numerous and diverse. An awareness of under-lying philosophical concepts will help the nurse to reason through these dilemmas. Basic concepts related to moral philosophy, such as ethics terminology, theories, and approaches. Understanding the role of the professional nurse in ethical decision making will assist nurses in articulating their ethical posi-tions and in developing the skills needed to make ethical decisions.

The terms ethics and morality are used to describe beliefs about right and wrong and to suggest appropriate guidelines for action. In essence, ethics is the formal, systematic study of moral beliefs, whereas morality is the adherence to informal personal values. Because the distinction between the two is slight, they are often used interchangeably.

One classic theory in ethics is teleologic theory or consequential-ism, which focuses on the ends or consequences of actions. The most well-known form of this theory, utilitarianism, is based on the concept of “the greatest good for the greatest number.” The choice of action is clear under this theory, because the action that maximizes good over bad is the correct one. The theory poses dif-ficulty when one must judge intrinsic values and determine whose good is the greatest. Additionally, the question must be asked whether good consequences can justify any amoral actions that might be used to achieve them.

Another theory in ethics is the deontologic or formalist theory, which argues that moral standards or principles exist independently of the ends or consequences. In a given situation, one or more moral principles may apply. The nurse has a duty to act based on the one relevant principle, or the most relevant of several moral principles. Problems arise with this theory when personal and cultural biases influence the choice of the most primary moral principle.

Two approaches to ethics are metaethics and applied ethics. An example of metaethics (understanding the concepts and linguis-tic terminology used in ethics) in the health care environment would be analysis of the concept of informed consent. Nurses are aware that patients must give consent before surgery, but some-times a question arises as to whether the patient is truly informed. Delving more deeply into the concept of informed consent would be a metaethical inquiry.

Applied ethics is the term used when questions are asked of a specific discipline to identify ethical problems within that disci-pline’s practice. Various disciplines use the frameworks of general ethical theories and moral principles and apply them to specific problems within their domain. Common ethical principles that apply in nursing include autonomy, beneficence, confidentiality, double effect, fidelity, justice, nonmaleficence, paternalism, re-spect for people, sanctity of life, and veracity. Brief definitions of these important principles can be found in Chart 3-2. 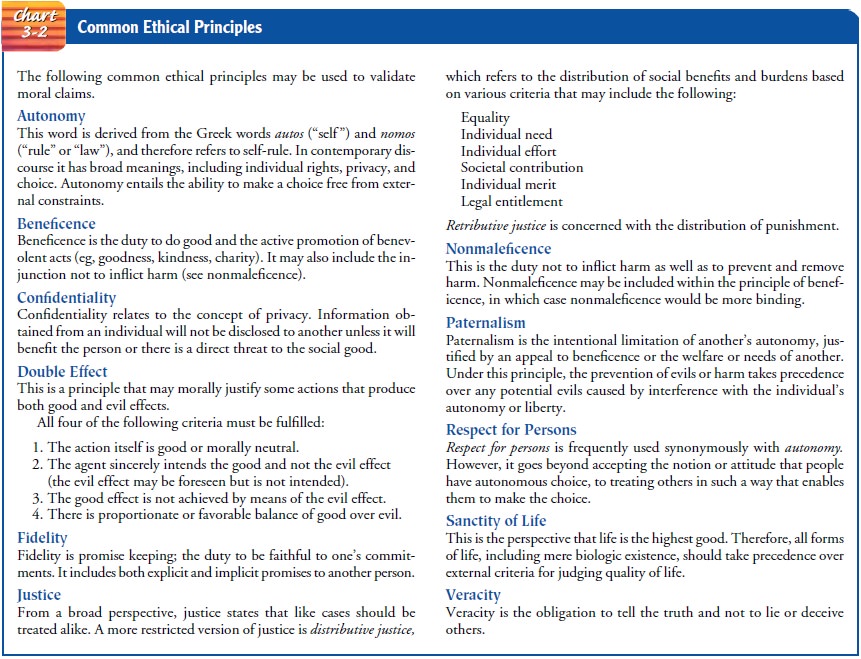 Nursing ethics may be considered a form of applied ethics be-cause it addresses moral situations that are specific to the nursing profession and patient care. Some ethical problems that affect nursing may also apply to the broader area of bioethics and health care ethics. However, the nursing profession is a “caring” rather than a predominantly “curing” profession; therefore, it is imperative that one not equate nursing ethics solely with medical ethics, because the medical profession has a “cure” focus. Nursing has its own professional code of ethics.

Many situations exist in which ethical analysis is needed. Some are moral dilemmas, situations in which a clear conflict exists betweentwo or more moral principles or competing moral claims, and the nurse must choose the lesser of two evils. Other situations repre-sent moral problems, in which there may be competing moral claims or principles but one claim or principle is clearly dominant. Some situations result in moral uncertainty, when one cannot accurately define what the moral situation is, or what moral principles apply, but has a strong feeling that something is not right. Still other sit-uations may result in moral distress, in which the nurse is aware of the correct course of action but institutional constraints stand in the way of pursuing the correct action (Jameton, 1984).

For example, a patient tells a nurse that if he is dying he wants everything possible done. The surgeon and family have made the decision not to tell the patient he is terminally ill and not to re-suscitate him if he stops breathing. From an ethical perspective, patients should be told the truth about their diagnoses and should have the opportunity to make decisions about treatments. Ideally, this information should come from the physician, with the nurse present to assist the patient in understanding the terminology and to provide further support, if necessary. A moral problem exists because of the competing moral claims of the family and physi-cian, who wish to spare the patient distress, and the nurse, who wishes to be truthful with the patient as the patient has requested. If the patient’s competency were questionable, a moral dilemma would exist because no dominant principle would be evident. The nurse could experience moral distress if the hospital threatens dis-ciplinary action or job termination if the information is disclosed without the agreement of the physician or the family, or both.

It is essential that nurses freely engage in dialogue concerning moral situations, even though such dialogue is difficult for every-one involved. Improved interdisciplinary communication is sup-ported when all members of the health care team can voice their concerns and come to an understanding of the moral situation. The use of an ethics consultant or consultation team could be helpful to assist the health care team, patient, and family to iden-tify the moral dilemma and possible approaches to the dilemma. The nurse should be familiar with agency policy supporting pa-tient self-determination and resolution of ethical issues. The nurse should be an advocate for patient rights in each situation (Trammelleo, 2000).

TYPES OF ETHICAL PROBLEMS IN NURSING

As a profession, nursing is accountable to society. This account-ability is spelled out in the American Hospital Association’s Patient Care Partnership (Chart 3-3), which reflects social beliefs about health and health care. In addition to accepting this document as one measure of accountability, nursing has further defined its standards of accountability through a formal code of ethics that explicitly states the profession’s values and goals. The code (Chart 3-4), established by the American Nurses Association (ANA), consists of ethical standards, each with its own interpre-tive statements (ANA, 2001). The interpretive statements provide guidance to address and resolve ethical dilemmas by incorporating universal moral principles (ANA’s Code of Ethics Project Task Force, 2000). The code is an ideal framework for nurses to use in ethical decision making. 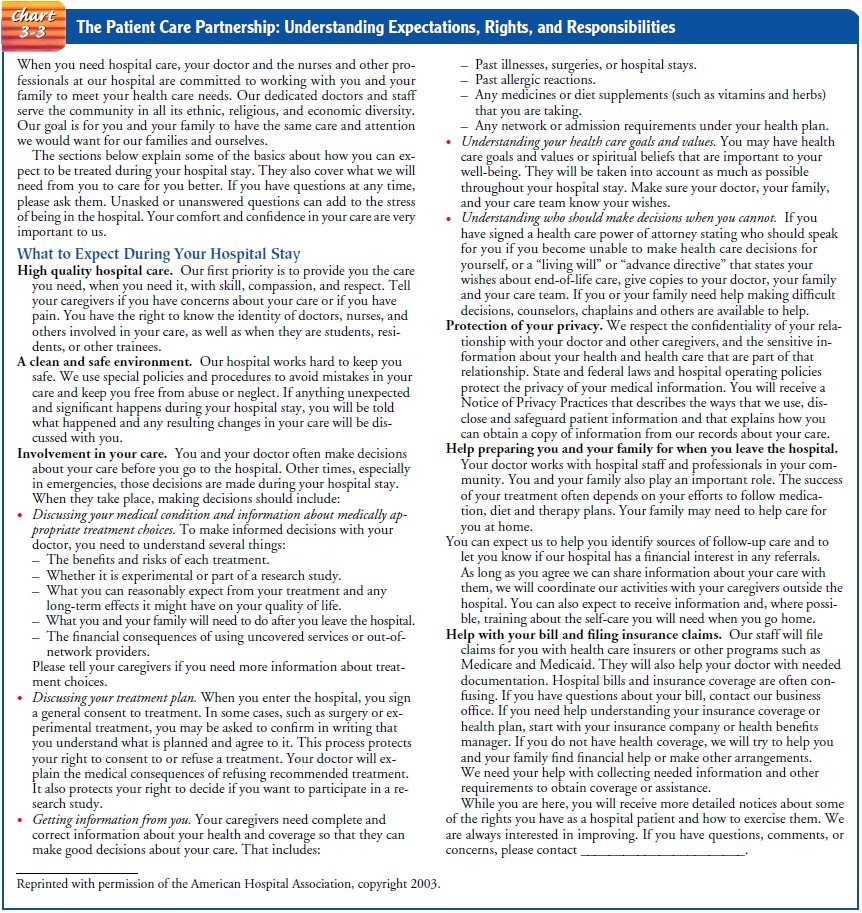 Ethical issues have always affected the role of the professional nurse. The accepted definition of professional nursing has inspired a new advocacy role for nurses. The ANA, in Nursing’s Social Pol-icy Statement (1995), defines nursing as “the diagnosis and treat-ment of human responses to health and illness.” This definition supports the claim that nurses must be actively involved in the decision-making process regarding ethical concerns surrounding health care and human responses. Efforts to enact this standard may cause conflict in health care settings in which the traditional roles of the nurse are delineated within a bureaucratic structure. If, however, nurses learn to present ethical conflicts within a logi-cal, systematic framework, struggles over jurisdictional boundaries may decrease. Health care settings in which nurses are valued members of the team promote interdisciplinary communication and may enhance patient care. To practice effectively in these set-tings, nurses must be aware of ethical issues and assist patients in voicing their moral concerns.

The basic ethical framework of the nursing profession is the phenomenon of human caring. Nursing theories that incorporate the biopsychosocial–spiritual dimensions emphasize a holistic viewpoint, with humanism or caring as the core. As the nursing profession strives to delineate its own theory of ethics, caring is often cited as the moral foundation. For nurses to embrace this professional ethos, it is necessary to be aware not only of major ethical dilemmas but also of those daily interactions with health care consumers that frequently give rise to ethical challenges that are not as easily identified. Although technological advances and diminished resources have been instrumental in raising numer-ous ethical questions and controversies, including life-and-death issues, nurses should not ignore the many routine situations that involve ethical considerations. Some of the most common issues faced by nurses today include confidentiality, use of restraints, trust, refusing care, genetics, and end-of-life concerns.