The works, which are constructed at the head of the canal, in order to divert the river water towards the canal, so as to ensure a regulated continuous supply of silt-free water with a certain minimum head into the canal, are known as Diversion Head works.

It was stated earlier that the main permanent canel, forming the primary part of a direct irrigation scheme, takes off from a diversion weir or a barrage. In fact, these permanent canals take off from rivers and the arrangements are so well made at their heads, that a constant and a continuous water supply is ensured into the canal, even during the periods of low flow. The works, which are constructed at the head of the canal, in order to divert the river water towards the canal, so as to ensure a regulated continuous supply of silt-free water with a certain minimum head into the canal, are known as Diversion Head works.

In general, the above purpose can be accomplished by constructing a barrier across the river, so as to raise the water level on the upstream side of the obstruction, and thus, to feed the main canals taking off from its upstream side at one or both of its flanks. The ponding of water can be achieved either only by a permanent pucca raised crest across the river or by a raised crest sup0plemnted by falling counter-balanced gates or shutters, working over the crest. If the major part or the entire ponding of water is achieved by a raised crest and a smaller part or nil part of it is achieved by the shutters, then this barrier is known as a weir [fig (a) and (b)]. On the other hand, if most of this ponding is done by gates and a smaller or nil part of it is done by the raised crest then the barrier is known as a Barrage or a River Regulator. 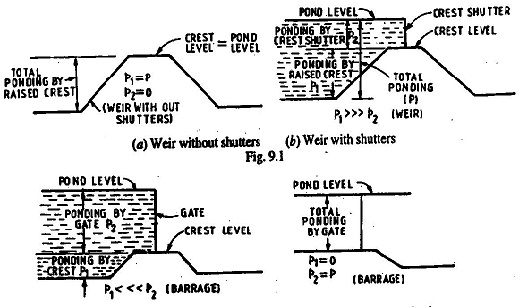 If most of the ponding or the entire ponding is done by a permanent raised crest, as a weir, then the afflux caused during high floods is quite high. On the other hand, if of the ponding is done b gates, as in a barrage, then gates can be opened high floods and the afflux (i.e. rise in HFL near the site) will be nil or minimum. Since, the latter device i.e. a barrage, gives less afflux and a better control upon the flow, because the inflow and outflow can be controlled to a much geater extent suitable manipulatios of its gates. 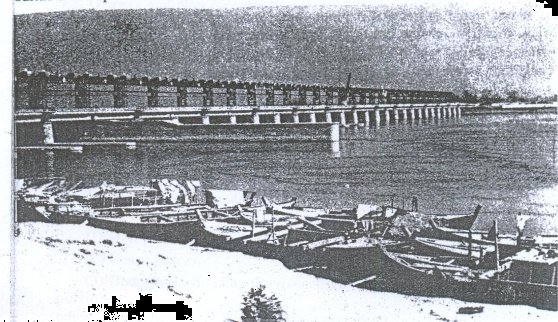 Figure: Photoview of a Barrage (Girija Barrage on Ghagra river in U.P) 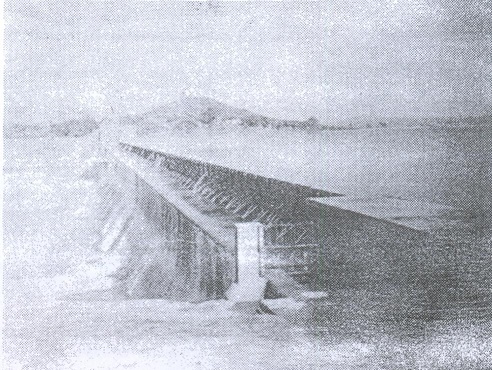 Figure: Photoview of a small height dam like weir, provided with shutters at top of its solid crest (Devri Dam near Jhansi in U.P.)

When the weight of the weir (i.e. its body and floor) balances the uplift pressure caused by the head of the water seeping below the weir, it is called a gravity weir. On the other hand, if the weir floor is designed continuous with the divide piers as reinforced structure, such that the weight of concrete slab together with the weight of divided piers, keep the structure safe against the uplift; the structure may be called as a Non gravity Weir. In the latter case, RCC has to be used in place of brick piers, but in particular cases, considerable savings may be obtained, as the weight of the floor can be much less than what is required in a gravity weir.

Layout of a Diversion Head Works and its Components

A typical layout of a canal head-works is shown in Fig. Such a head-works consists of:

(3)     Divided wall, dividing the river width into two portions; one is called the weir portion, and the other portion from which the canal take-sluice-pocket’ -sluices’or‘underor ‘weir scouring sluice from each flank, then there will be two divide walls and two under sluices. 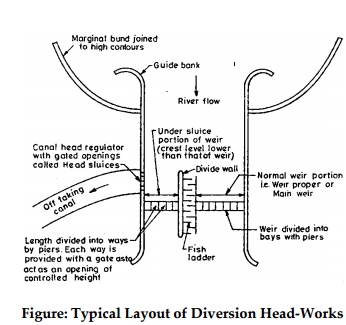 The various parts of a diversion head-works schemes and their design considerations are explained in details in the following pages.

The Diversion Weir and its Types. Alignment. As stated earlier, a diversion weir or an anycut or an intake weir is a raised pucca structure with or without shutters and laid across the river width. It is, essentially, of a height say up to 9 metres or so. The height of shutters over the weir crest seldom exceeds 1.2 metres or so. The entire length of the weir is divided into a number of bays by means of divide piers so as to avoid cross-flow in floods. As far as possible, the weir should be aligned at right angle to the direction of the main river current. This ensures lesser length of the weir, better discharging capacity and lesser cost. This right-angled alignment is better and, therefore, common, especially, when the river bed is silty or sandy. Sometimes, the weir may be aligned at an oblique angle to the direction of the river current, and thereby, obtaining more safe and better foundations. In such a case, the weir will be of greater length, will have less discharging power and will be costlier. Moreover, due to non-axial flow, cross-currents may be developed, which may undermine the weir foundation. An oblique alignment may sometimes become necessary, when the river bed consists of gravel and shingle, which could otherwise enter the head regulator of the main canal and get deposited into the head reach of the main canal.

Types of Tank Weir and Their Cross-sections.

Tank escape weirs are similar to river-weirs (i.e. diversion weirs or anicuts), and hence, they may be classified into the following three general types:

Type  A: Masonry weirs with a vertical drop;

Type  B: Rockfill weirs with a sloping apron; and

These three types of river weirs have already been discussed in article.

Besides these three important types of river weirs, which are used as tank weirs also, the fourth type of a tank weir which is a combination of type A and type C, may also be used. In such a D type weir, a number of vertical steps are made (as in the case of a stepped fall) instead of providing a horizontal or sloping downstream apron. Such weirs of type d are called weirs with stepped aprons. The A and D type of weirs are most widely adopted, although every type of weir has been used in Sourth Indian tanks.

The A type of weir i.e. weir with a masonary pucca horizontal floor, may sometimes by provided with depressed floors, so as to provide sufficient water-cushion for absorbing the impact of high water falls. Typical sections of the two sub-types of A type, and D type of weirs, and the conditions under which each is adopted are shown in figs. (a) (b), and respectively.

Figure: (a) A typical masonry tank weir with a vertical drop, with a horizontal under pressed floor, suitable for low drops of 0.6 to 0.9 metre or for even higher drops when the soil is a rock.

Figure: (b) A typical masonary tank weir with a vertical drop with depressed floor, suitable for high drop (say 2.5 m upward) or in soft soils but only slightly pervious.

Say for example, the river weirs or anicuts are generally founded on soft sandy soils, whereas in tank weirs, almost every class of soils is occasionally to be built on, except this rarely met foundation sand.

Similarly, the tail water conditions in anicuts differ from those in tank weirs. This is because, the tail water backing up during floods and affording some protection to the talus and to the soil at the downstream toe of the apron, are absent in the majority of tank weirs; and, therefore, the tank weirs built on soft oil would, other things being equal, be more exposed to damage by scour at the downstream toe of the apron and retrogression of levels than river weirs. 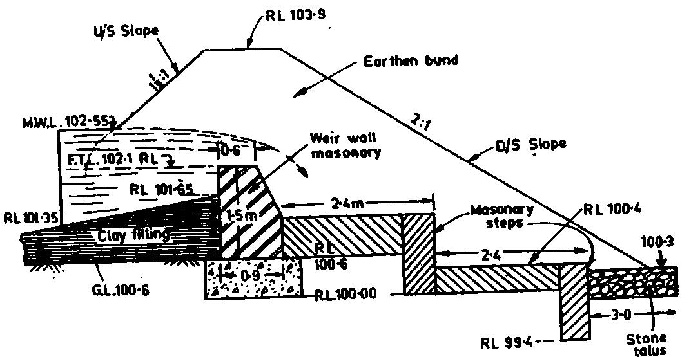 Figure A typical stepped-apron tank-weir suitable for sites on soft soil when the drop exceeds 0.9 metre.

On the other hand, the depth of water passing over the crests of tank weirs is generally far less than that over anicuts, and in the case of very many tanks, it is only, on an average, for a few days each year, that any flow at all passes over the weir, and while the duration of continuous heavy flow is frequently limited to a maximum of two to three days. Tank weirs are, thus, usually worked, far less heavily and far less continuously than anicuts, and this fact may be duly considered while designing them.

Empirical Formulas for Determining Width of Floors of Tank Weirs. The width of the horizontal floors of type A and D weirs, from the foot of the drop wall to the downstream edge of the floor should never be less than 2 (D + H) where D is the height of the drop wall, and H is the maximum water head over the wall. In important works, this width may be increased to 3 (D + H). The rough stone apron forming a talus below the last curtain wall may be of varying widths depending on the nature of the soil and the velocity and annual probable quantity and intensity of runoff ; it would generally vary from 2.5 (D + H) according to varying conditions.