A canal head regulator is required to serve the following function: (i) To regulate the discharge into the off taking canal, functions: (ii)To control the entry of sediment into the canal, and

A canal head regulator is required to serve the following function:

(i) To regulate the discharge into the off taking canal, functions:

(ii)To control the entry of sediment into the canal, and

(5) . This orientation minimizes entry of sediment into the off taking canal and prevent backflow and stagnation zones in the under sluice pocket upstream of the regulator. The discharge through the regulator is controlled by gates. Steel gates of 6 to 8 m spans are generally used. However, larger spans can also be used in which case the gates are operated by electric winches. 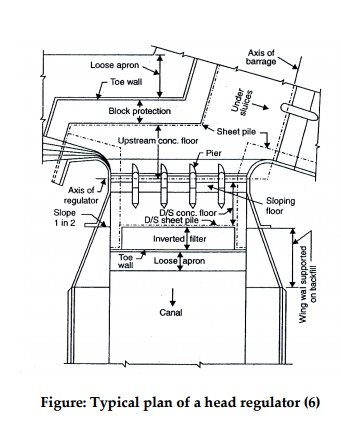 The height of the gates is equal to the difference of the pond level and the crest level of regulator. But during high floods, the water level in the river would be much higher than pond level, and the flood water may spill over the gates. It would, obviously, be very economical to provide gates up to the HFL. Besides the cost of heavier gates, the machinery required to operate them under large water pressures would also be expensive. To prevent such spilling of flood water into the canal, an RCC breast wall between the pond and HFL, and spanning between adjacent piers is always provided. With this provision, gate opening between the crest level and pond level is fully open which the gate is raised up, i.e., up to the pond level. The opening is fully closed when the gate is lowered to the crest the regulator. 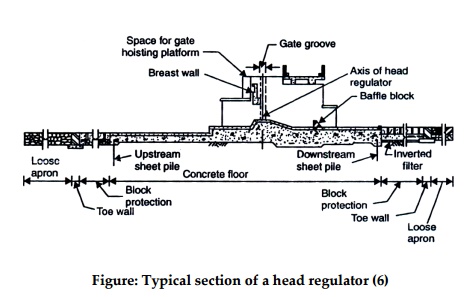 Once the crest level, waterway, number of spans, and thickness of piers have been fixed, he head regulator is designed using the principles of weir design. The canal is generally kept used when the highest flood passes through the river. This, obviously, would be the worst attic condition and, hence, the floor thickness must be able to resist uplift pressures under its condition. The exit gradient for this condition should also be within safe limits. For economic reasons, the floor is designed such that it can support the uplift pressure by its weight and also be bending strength. For this purpose, the piers may have to be extended up to the floor to provide necessary support to the upward bending slab.

In the jump trough region, the worst condition of uplift may occur when some discharge passing into the canal. The safety of this part of the floor should. Therefore, be checked for efferent discharges including the maximum one also. The extension of the concrete floor upstream of the under sluices up to the end of the head regulator also reduces the uplift pressures the downstream floor of the regulator.

A bridge and a working platform (for the operation of gates) are also constructed across he head regulator.

Thus the method proposed by Garde et al. gives relatively smaller value of hfor the given problem compared to the value of h obtained by either CampDobbins method o method.