Definition and Types of Arch Dams

An arch dam may be defined as a solid wall, curved in plan, standing across the entire width of the river valley, in a single span when multiple or a number or arches are used, supported between intermediate piers, the dam is known as a buttress dam.

Definition and Types of Arch Dams

An arch dam may be defined as a solid wall, curved in plan, standing across the entire width of the river valley, in a single span when multiple or a number or arches are used, supported between intermediate piers, the dam is known as a buttress dam. This dam body is usually made of cement concrete, although rubble and stone masonry has also been used in the past.

This wall will structurally behave: partly as a cantilever retaining wall standing up from its base, and partly, the load will be transferred to the two ends of the arch span by horizontal arch action. The arch load will, thus, be transferred to the side walls of the canyon, which must be strong, stable and rocky.

The distribution of part of the load to the side walls of the canyon, reduces the load on the cantilever wall, thereby reducing its thickness, as compared to that in an ordinary gravity dam; and that is the only benefit we derive from an arch dam in comparison to a gravity dam.

This economy in dam thickness can be further increased considerably by making the dam body not only curved in plan, but also curved in section. Such a non vertical dam is known as double curvature arch dam or a shell-arch dam, because such dams are designed as shell-structures. Such three dimensional designs are quite complex, and are taught only at M-Tech level in Structural Engineering.

Since the design and construction of an arch dam is very complicate, requiring extraordinary skill for erecting shuttering in the field, it is generally preferred in practical lift to construct gravity dams. And that is why; we find only one arch dam in our country Idukki dam, across Periyar river in Kerala State, as against several hundreds of gravity dams. This arch dam too, is not a simple arch dam, but a shell-arch dam.

Simple arch dams, which transfer a large part of their loading by cantilever action, may also be of different types, since their faces may be either vertical or curvilinear. Depending upon the shape consideration, simple arch dams can be divided into three types, viz:

A constant radius arch dam is that, in which, the radii of the outside water side or upstream side curved surface are equal at all elevations, from top to the bottom. The centres of all such circular arcs, called electrodes, will therefore, evidently lie on one vertical line. However, the intrudes (i,e inside downstream curved surface of the arch) has gradually decreasing radius from top to the bottom, so as to provide increased concrete thickness towards the base for accounting the proportionally increasing hydrostatic water pressure of the reservoir. The dam body will, therefore, be triangular in cross-section with upstream face vertical, and a minimum thickness at the top.

Evidently, the central angles of the arch rings of the introdos will vary at different elevations, due to the varying width of the river valley (see figure); the maximum being at the top of the dam, and the minimum at the bottom of the dam.

It has further been shown that the best or most economical central angle in an arch dam is the one whose value is equal to 133¬ o -34‚Äô isthisderived in article a little later. But in a constant radius arch dam, such an angle value can be adopted only at one place, since the angle varies with height considerably, due to narrow V-shape of the valley. It is therefore considered prudent to 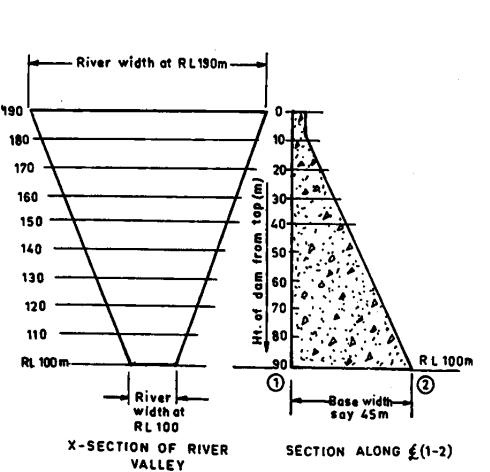 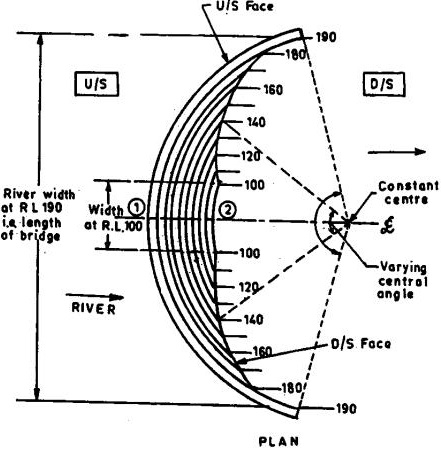 Elevations, being maximum at the top, and a certain minimum at its bottom. This makes the central angles as large as possible, so that the maximum arch efficiency may be obtained at all elevations.

In a typical design of such a dam, the downstream face of the dam at the central line (crown) is vertical; while at all other locations, there is a batter on both the sides except at the abutments, where again, the upstream side becomes vertical. If overhands are permitted, due to availability of stronger foundations, then the faces at the crown as well as abutments, may be provided with overhangs, affecting saving in the designed thickness.

Evidently, since in such an arch dams, the centre of the various arch rings at different elevations, do not lie on the same vertical line; it is also known as variable centre arch dam. Such dams are preferred for V-shaped valleys as compared to constant radius arch dams which may be preferred for comparatively wider U-shaped valleys.

The constant angle arch dam is a special type of variable radius arch dam, in which the central angles of the horizontal arch rings are of the same magnitude at al elevations, as shown in figure. The design of such a dam can, thus, be made by adopting the best central angle of 133¬ o -

34‚Äô; and hence such a dam proves to be thearch mos dams, as pointed out earlier also.

However, the design of such a dam usually involves providing overhangs at abutments, which require stronger foundations, and hence such a type cannot be used if the foundations are weak.

Generally, the same forces act on arch dam, which do act on a gravity dam. These forces are: (i) water pressure; (ii) Uplift pressure; (iii) earthquake forces; (iv) silt pressure; (v) wave pressure (vi) ice pressure; as discussed in article. However, the relative importance of the forces is difference in an arch dam, as compared is small and is generally neglected, because of the narrow base width of its body. On the other hand, the stresses caused by ice, temperature changes, and yields of supports (i.e. abutments), generally become quite important in arch dams, and hence must be thoroughly examined.

Whereas, the ice pressure, applicable in cold countries, causes a continuous concentrated load along the arch element at the elevation of the ice; the internal stresses caused by the temperature changes move the dam upstream during the summer and downstream during the winter. Hence the low water temperatures become quite important in stress analysis, since these stresses act additive to the reservoir water pressure. Moreover, even the slight yield of abutments due to transfer of load by arch action, may also cause high internal stresses in the arch, and state therefore, be prudently accounted for.

Arch dams can be designed on the basis of any one of the following three methods: