Also called Bell’s bund. It is defined as the site of a barrage, weir, bridge, ect.

Also called Bell’s bund. It is defined as the site of a barrage, weir, bridge, ect. To guide the river flow through the confined waterway without causing damage to the structure and its approaches. They are provided in the direction of flow, both upstream and downstream of the barrage of one or both flanks depending or requirement. The guide banks are usually provided in pairs, symmetrical in plan and may either be parallel or converge slightly towards the structure, extending a little downstream but laygely on the upstream of the structure and curved inlands on both ends to provided a bellmouth entry and smooth exit. The layout of training works for a barrage, weir or bridge are almost identical and consist of a pair of guide banks and armoured groynes. The guide banks are two heavily armoured embankments in the river in the from of a bellmouth figure. Simple approach embankments span the portion of the river between the normal river banks and the guide banks. 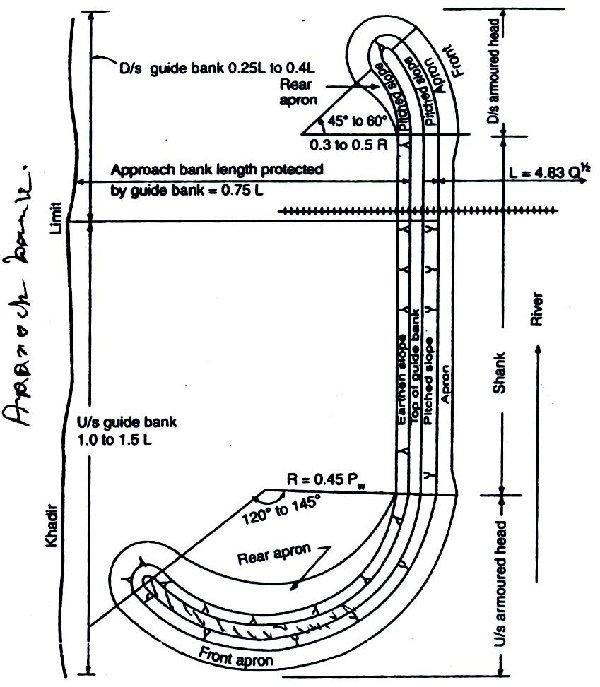 Functions of a Guide Bank: The functions served by a guide bank are (i) Economical spanning of a wide river, (ii) Safe and expeditions passage of floods, (iii) Protect adjacent lands, upstream of a weir or barrage from spills due to afflux caused by the barrage construction, (iv) control and confine the flow axially through a restricted waterway so that the river has no possibility to swing about and outflank the structure, (v) Prevent occurrence of crossflow immediately upstream of barrage, and (vi) Protect the approach embankments (on either side of a bridge extending from the river bank to the guide banks) from direct attack by the river.

1. According to Form in plan: The pair of guide banks may be parallel, divergent or convergent in plan upstream of the structure.

(a)   Parallel guide banks. Where the river is likely to meander on both sides, parallel guide banks with suitable curved heads are essentially required to give uniform flow from the head of the guide bank to the work. Symmetrical and parallel guide bands figure are usually adopted unless local conditions warrant adoption of convergent or divergent banks; their suitability being indicated by model studies.

Divergent guide banks. Divergent guide banks exercise an attracting influence on the flow and are indicated where approaching flow is oblique to the structure or work is located at one edge of khadir, in order to keep the flow active in the spans adjacent to them. However they provide relatively less protection to the approach embankment, under worst possible embayment Embayment. A localized widening of a river or channel brought out artificially or naturally, as compared to the equal length of parallel guide banks. The divergent guide banks thus require longer length in comparison to parallel guide banks for the same degree of protection to the approach embankment. They induce oblique flow onto the barrage and give rise to tendency of shoal formation in the centre due to larger waterway between curved heads. 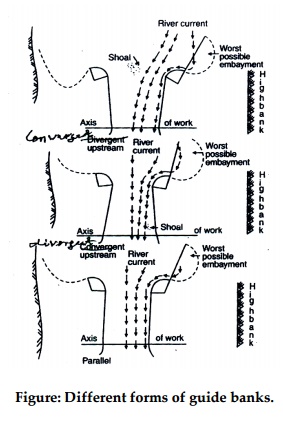 Figure: Extent of protection provided by the straight and divergent guide banks.

2. According to Geometrical Shape. On the basis of geometrical shape, the guide banks are classified as straight and elliptical with circular or multiradii curved head. Any other shape, if warranted by site conditions, is determined with the aid of hydraulic model studies.

Elliptical guide banks are preferred to the straight ones on account of the considerations (i) More suitable for wide flood plain rivers compared to straight guide banks, (ii) Flow hugs the guide banks all along their length due to gradual change in curvature, while separations of flow occurs in straight guide banks after the curved head which leads to obliquity of flow, and (iii) Provide better control on development and extension of meander loop towards the approach embankment.