Giver training structures for canal head works are required for the following purposes :

ii.          To minimize possible crossflow through the barrage of weir which may endanger the structure and protection works.

iii.          To prevent flooding of the riverine lands upstream of the barrages and weirs, and

iv.          To provide favourable curvature of flow at the head regulator from the consideration of entry of sediment into the canal.

The following types of river training structures are usually provided for weirs (13):

The purpose of guide banks is to narrow down and restrict the course of a river so that river flows centrally through the weir constructed across it without damaging the structure its approaches. The alignment of guide banks should be determined such that the pattern flow at the head regulator induces favourable curvature of flow minimizing sediment entry the canal system (19). More details of guide banks have been included in Chapter 12 and typical sketch of river training structures provided at weirs and salient details of guide likes are given in figure and . While constructing weirs on alluvial rivers, the natural byway is restricted from economic and flow considerations, and the unabridged width of is blocked by means of approach embankments. Depending upon the distance between guide bank and the extent of the alluvial belt, the river may form either one or tow meander. The approach embankments, aligned with the weir axis, should extend up to point beyond the range of the worst anticipated loop.

Afflux embankments are earthen embankments which extend from both the abutments the approach embankments) and are connected on the upstream to the ground above the axed highest flood level (or to flood embankments, if existing). 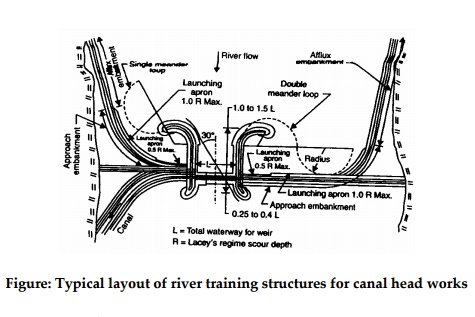 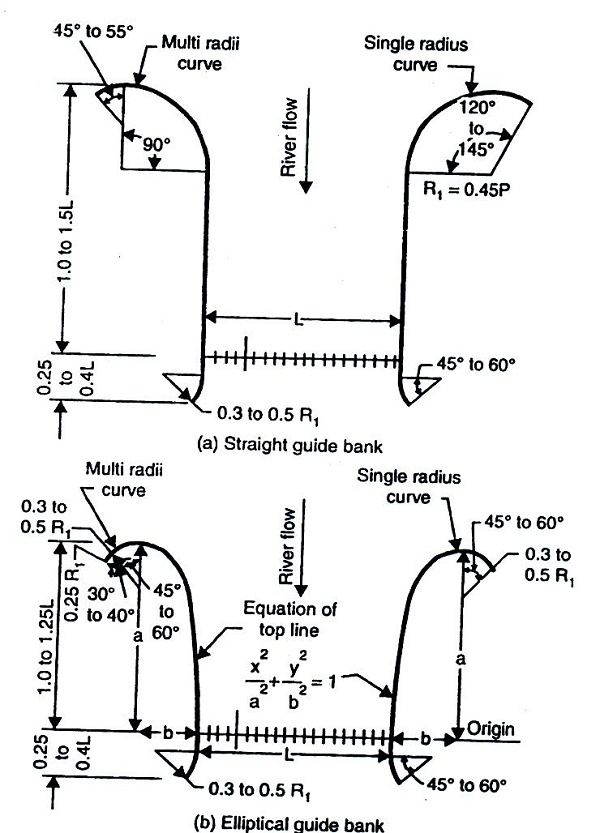 A top width of about 6 to 9 m and freeboard of 1.0 to 1.5 m above the highest flood level for a 1in500 years flood) are usually provided for these river training works (19). Besides, stone pitching, launching aprons, etc. are also provided in the usual manner as described.