The transmission and distribution systems are similar to man’s circulatory system. The trans- mission system may be compared with arteries in the human body and distribution system with capillaries. They serve the same purpose of the ultimate consumer in the city with the life-giving blood of civilization–electricity. In this chapter, we shall confine our attention to the general introduction to distribution.

A feeder is a conductor which connects the sub-station (or localized generating station) to the area where power is to be distributed. Generally, no tappings are taken from the feeder so that current in it remains the same throughout. The main consideration in the design of a feeder is the current carrying capacity.

A service mains is generally a small cable which connects the distributor to the consumers’ terminals.

A distribution system may be classified according to ;

According to nature of current, distribution system may be classified as

Now-a-days, a.c. system is universally adopted for distribution of electric power as it is simpler and more economical than direct current method

According to type of construction distribution system may be classified as

According to scheme of connection, the distribution system may be classified as 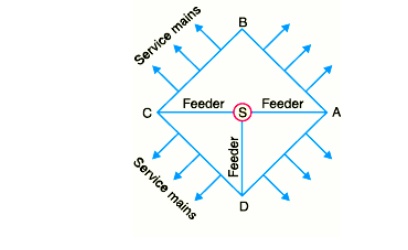 Now-a-days electrical energy is generated, transmitted and distributed in the form of alternating cur-rent. One important reason for the widespread use of alternating current in preference to direct current is the fact that alternating voltage can be conveniently changed in magnitude by means of a transformer. Transformer has made it possible to transmit a.c. power at high voltage and utilise it at a safe potential. High transmission and distribution voltages have greatly reduced the current in the conductors and the resulting line losses.

It is that part of a.c. distribution system which operates at voltages somewhat higher than general utilization and handles large blocks of electrical energy than the average low-voltage consumer uses. The voltage used for primary distribution depends upon the amount of power to be conveyed and the distance of the substation required to be fed. The most commonly used primary distribution voltages are 11 kV, 6·6 kV and 3·3 kV. 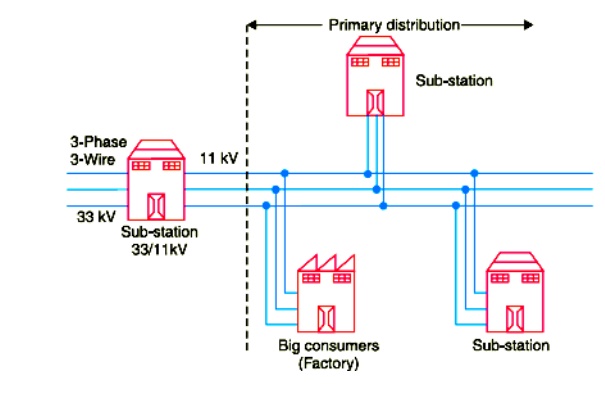 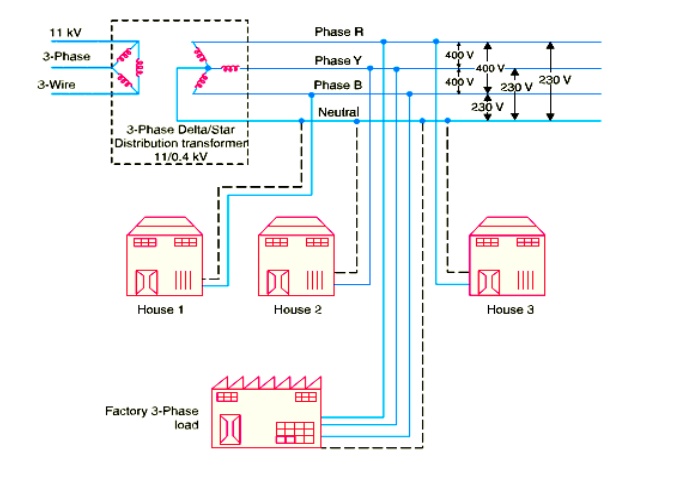 It is a common knowledge that electric power is almost exclusively generated, transmitted and distributed as a.c. However, for certain applications, d.c. supply is absolutely necessary. For instance, d.c. supply is required for the operation of variable speed machinery (d.c. motors), for electro-chemical work and for congested areas where storage battery reserves are necessary. For this purpose, a.c. power is converted into d.c. power at the substation by using converting machinery e.g., mercury arc rectifiers, rotary converters and motor-generator sets. The d.c. supply from the substation may be obtained in the form of

As the name implies, this system of distribution consists of two wires. One is the outgoing or positive wire and the other is the return or negative wire. The loads such as lamps, motors etc. are connected in parallel between the two wires as shown in Fig. 12.4. This system is never used for transmission purposes due to low efficiency but may be employed for distribution of d.c. power.

It consists of two outers and a middle or neutral wire which is earthed at the substation. The voltage between the outers is twice the voltage between either outer and neutral wire as shown in Fig. 12.5. The principal advantage of this system is that it makes available two voltages at the consumer terminals viz., V between any outer and the neutral and 2V between the outers. Loads requiring high voltage ( e.g., motors) are connected across the outers, whereas lamps and heating circuits requiring less voltage are connected between either outer and the neutral. The methods of obtaining 3-wire system are discussed in the following article.

The distribution system can be overhead or underground. Overhead lines are generally mounted on wooden, concrete or steel poles which are arranged to carry distribution transformers in addition to the conductors. The underground system uses conduits, cables and manholes under the surface of streets and sidewalks. The choice between overhead and underground system depends upon a num-ber of widely differing factors. Therefore, it is desirable to make a comparison between the two.

The underground system is more safe than overhead system because all distribution wiring is placed underground and there are little chances of any hazard.

The underground system is more expensive due to the high cost of trenching, conduits, cables, manholes and other special equipment. The initial cost of an underground system may be five to ten times than that of an overhead system.

The overhead system is much more flexible than the underground system. In the latter case, manholes, duct lines etc., are permanently placed once installed and the load expansion can only be met by laying new lines. However, on an overhead system, poles, wires, transformers etc., can be easily shifted to meet the changes in load conditions.

The chances of faults in underground system are very rare as the cables are laid underground and are generally provided with better insulation.

The general appearance of an underground system is better as all the distribution lines are invisible. This factor is exerting considerable public pressure on electric supply companies to switch over to underground system.

In general, there are little chances of faults in an underground system. However, if a fault does occur, it is difficult to locate and repair on this system. On an overhead system, the conductors are visible and easily accessible so that fault locations and repairs can be easily made.

The maintenance cost of underground system is very low as compared with that of overhead system because of less chances of faults and service interruptions from wind, ice, lightning as well as from traffic hazards.

An overhead system causes electromagnetic interference with the telephone lines. The power line currents are superimposed on speech currents, resulting in the potential of the communication channel being raised to an undesirable level. However, there is no such interference with the underground system.

It is clear from the above comparison that each system has its own advantages and disadvan tages. However, comparative economics ( i.e., annual cost of operation) is the most powerful factor influencing the choice between underground and overhead system. The greater capital cost of underground system prohibits its use for distribution. But sometimes non-economic factors ( e.g., general appearance, public safety etc.) exert considerable influence on choosing underground system. In general, overhead system is adopted for distribution and the use of underground system is made only where overhead construction is impracticable or prohibited by local laws.

All distribution of electrical energy is done by constant voltage system. In practice, the following distribution circuits are generally used :

This is the simplest distribution circuit and has the lowest initial cost. However, it suffers from the following drawbacks :

( a) The end of the distributor nearest to the feeding point will be heavily loaded.

( b) The consumers are dependent on a single feeder and single distributor. Therefore, any fault on the feeder or distributor cuts off supply to the consumers who are on the side of the fault away from the substation.

Due to these limitations, this system is used for short distances only.

In this system, the primaries of distribution transformers form a loop. The loop circuit starts from the substation bus-bars, makes a loop through the area to be served, and returns to the substation. Fig. 12.9 shows the single line diagram of ring main system for a.c. distribution where substation supplies to the closed feeder LMNOPQRS. 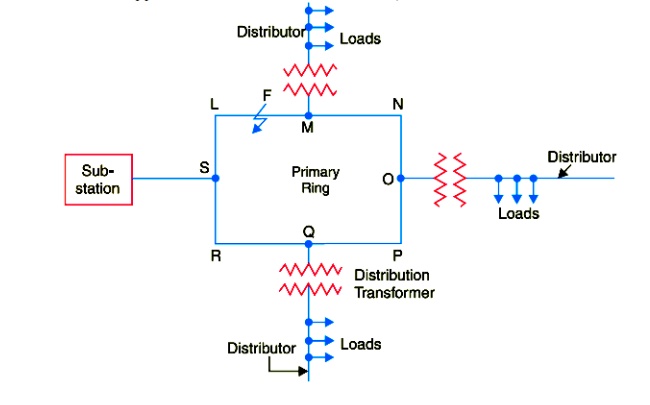 The distributors are tapped from different points M, O and Q of the feeder through distribution transformers. The ring main system has the following advantages :

( a) There are less voltage fluctuations at consumer’s terminals. 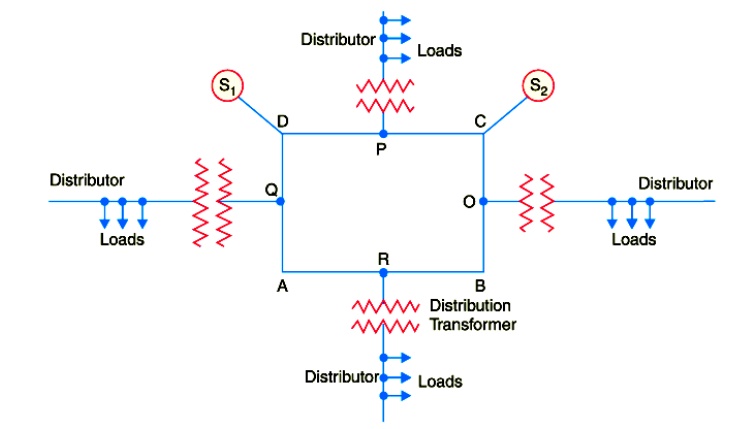 Distributors are connected to points O, P, Q and R of the feeder ring through distribution transformers. The interconnected system has the following advantages :

( a) It increases the service reliability.

7. REQUIREMENTS OF A DISTRIBUTION SYSTEM

A considerable amount of effort is necessary to maintain an electric power supply within the requirements of various types of consumers. Some of the requirements of a good distribution system are : proper voltage, availability of power on demand and reliability.

One important requirement of a distribution system is that voltage variations at consumer’s terminals should be as low as possible. The changes in voltage are generally caused due to the variation of load on the system. Low voltage causes loss of revenue, inefficient lighting and possible burning out of motors. High voltage causes lamps to burn out permanently and may cause failure of other appliances. Therefore, a good distribution system should ensure that the voltage variations at consumers terminals are within permissible limits. The statutory limit of voltage variations is ± 6% of the rated value at the consumer’s terminals. Thus, if the declared voltage is 230 V, then the highest voltage of the consumer should not exceed 244 V while the lowest voltage of the consumer should not be less than 216 V.

( ii) Availability of power on demand.

Power must be available to the consumers in any amount that they may require from time to time. For example, motors may be started or shut down, lights may be turned on or off, without advance warning to the electric supply company. As electrical energy cannot be stored, therefore, the distribution system must be capable of supplying load demands of the consumers. This necessitates that operating staff must con-tinuously study load patterns to predict in advance those major load changes that follow the known schedules.

Modern industry is almost dependent on electric power for its operation. Homes and office buildings are lighted, heated, cooled and ventilated by electric power. This calls for reliable service. Unfortunately, electric power, like everything else that is man-made, can never be absolutely reliable. However, the reliability can be improved to a considerable extent by ( a) interconnected system ( b) reliable automatic control system ( c) providing additional reserve facilities.

Good voltage regulation of a distribution network is probably the most important factor responsible for delivering good service to the consumers. For this purpose, design of feeders and distributors requires careful consideration.

A feeder is designed from the point of view of its current carrying capacity while the voltage drop consideration is relatively unimportant. It is because voltage drop in a feeder can be compensated by means of voltage regulating equipment at the substation.