Electric power is the product of two quantities: current and voltage.

Electric power is the product of two quantities: current and voltage. These two quantities can vary with respect to time (AC power) or can be kept at constant levels (DC power).Most refrigerators, air conditioners, pumps and industrial machinery use AC power whereas most computers and digital equipment use DC power (the digital devices you plug into the mains typically have an internal or external power adapter to convert from AC to DC power).

AC power has the advantage of being easy to transform between voltages and is able to be generated and utilised by brushless machinery. DC power remains the only practical choice in digital systems and can be more economical to transmit over long distances at very high voltages (see HVDC)

The ability to easily transform the voltage of AC power is important for two reasons: Firstly, power can be transmitted over long dist ances with less loss at higher voltages. So in power systems where generation is distant from the load, it is desirable to step-up (increase) the voltage of power at the generation point and then step-down (decrease) the voltage near the load. Secondly, it is often more economical to install turbines that produce higher voltages than would be used by most appliances, so the ability to easily transform voltages means this mismatch between voltages can be easily managed Solid state devices, which are products of the semiconductor revolution, make it possible to transform DC power to different voltages, build brushless DC machines and convert between AC and DC power. 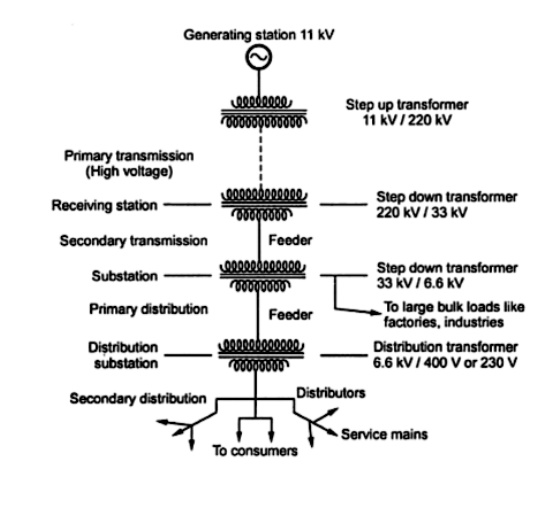