Acrocyanosis: This type of ‘poor circulation’, often familial, is more common in females than males.

This type of ‘poor circulation’, often familial, is more common in females than males. The hands, feet, nose, ears and cheeks become blue-red and cold. The palms are often cold and clammy. The condition is caused by arteriolar constriction and dilatation of the subpapil-lary venous plexus, and to cold-induced increases in blood viscosity. The best answers are warm clothes and the avoidance of cold.

This occurs in fat, often young, women. Purple-red mottled discoloration is seen over the buttocks, thighs and lower legs. Cold provokes it and causes an unpleas-ant burning sensation. An area of acrocyanosis or erythrocyanosis may be the site where other disorders will settle in the future, e.g. perniosis, erythema in-duratum, lupus erythematosus, sarcoidosis, cutaneous tuberculosis and leprosy.

In this common, sometimes familial, condition, inflamed purple-pink swellings appear on the fingers, toes and, rarely, ears (Fig. 11.1). They arrive with winter and are induced by cold. They are painful, and itchy or burning on rewarming. Occasionally they ulcerate. Chilblains are caused by a combination of arteriolar and venular constriction, the latter predom-inating on rewarming with exudation of fluid into the tissues. Warm housing and clothing help. Topical remedies rarely work, but the oral calcium channel blocker nifedipidine may be useful. The blood pressure should be monitored at the start of treatment and at return visits. The vasodilator nicoti-namide (500 mg three times daily) may be helpful alone or in addition to calcium channel blockers. Sympathectomy may be advised in severe cases. 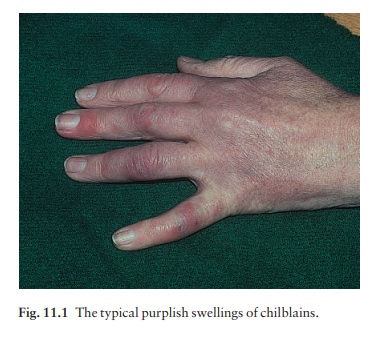 This is a rare condition in which the extremities become red, hot and painful when they or their owner are exposed to heat.

Erythema accompanies all inflammatory skin condi-tions, but the term ‘the erythemas’ is usually applied to a group of conditions with redness but without prim-ary scaling. Such areas are seen in some bacterial and viral infections such as toxic shock syndrome and measles. Drugs are another common cause . If no cause is obvious, the rash is often called a ‘toxic’ or ‘reactive’ erythema (Table 11.1). 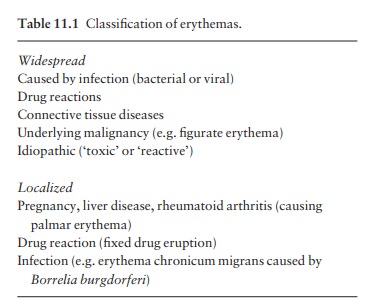 When erythema is associated with oedema (‘urticated erythema’) it becomes palpable.

These are chronic eruptions, made up of bizarre ser-piginous and erythematous rings. In the past most carried Latin labels; happily, these eruptions are now grouped under the general term of ‘figurate erythemas’. Underlying malignancy, a connective tissue disorder, a bacterial, fungal or yeast infection, worm infestation, drug sensitivity and rheumatic heart disease should be excluded, but often the cause remains obscure.

This may be an isolated finding in a normal person or be familial. Sometimes it is seen in pregnancy, liver disease or rheumatoid arthritis. Often associated with spider telangiectases , it may be caused by increased circulating oestrogens.

These annular erythematous areas are usually solitary, and occur most often on exposed skin after a tick bite. They expand slowly and may become very large.

This term refers to permanently dilatated and visible small vessels in the skin. They appear as linear, punctate or stellate crimson-purple markings. The common causes are given in Table 11.2. 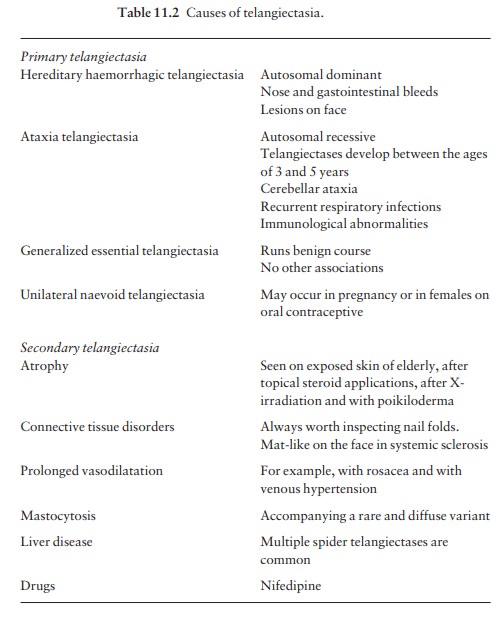 These stellate telangiectases do look rather like spiders, with legs radiating from a central, often palpable, feeding vessel. If the diagnosis is in doubt, press on the central feeding vessel with the corner of a glass slide and the entire lesion will disappear. Spider naevi are seen frequently on the faces of normal children, and may erupt in pregnancy or be the presenting sign of liver disease, with many lesions on the upper trunk. Liver function should be checked in those with many spider naevi. The central vessel can be destroyed by electrodessication without local anaesthesia or with a pulsed dye laser.

This cyanosis of the skin is net-like or marbled and caused by stasis in the capillaries furthest from their arterial supply: at the periphery of the inverted cone supplied by a dermal arteriole (see Fig. 2.1). ‘Cutis marmorata’ is the name given to the mottling of the skin seen in many normal children. It is physiological and disappears on warming, whereas true livedo reticularis remains. 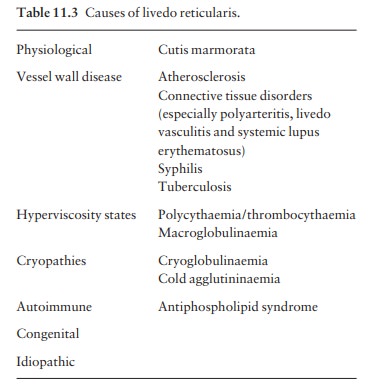 Some patients with an apparently idiopathic livedo reticularis develop progressive disease in their peri-pheral, cerebral, coronary and renal arteries. Others, usually women, have multiple arterial or venous thrombo-embolic episodes accompanying livedo reticularis. Recurrent spontaneous abortions and intrauterine fetal growth retardation are also features. Prolongation of the activated partial thromboplastin time (APTT) and the presence of antiphospholipid antibodies (either anticardiolipin antibody or lupus anticoagulant, or both) help to identify this syndrome. Systemic lupus erythematosus should be excluded .

This appearance is also determined by the underlying vascular network. Its reticulate pigmented erythema, with variable scaling, is caused by damage from long-term exposure to local heatausually from an open fire, hot water bottle or heating pad. If on one side of the leg, it gives a clue to the side of the fire on which granny likes to sit (Fig. 11.2). The condition is com-mon in northern Europe (‘tinker’s tartan’), but rare in the USA, where central heating is the rule. 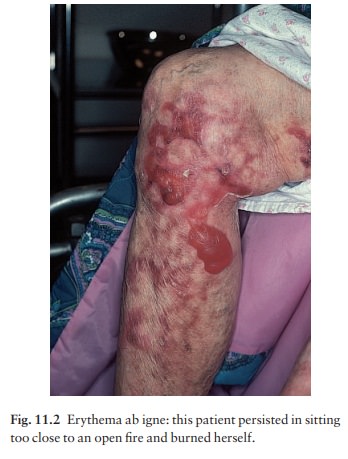 This transient vasodilatation of the face may spread to the neck, upper chest and, more rarely, other parts of the body. There is no sharp distinction between flushing and blushing apart from the emotional pro-vocation of the latter. The mechanism varies with the many causes that are listed in Table 11.4. Paroxysmal flushing (‘hot flushes’), common at the menopause, is associated with the pulsatile release of luteinizing hormone from the pituitary, as a consequence of low circulating oestrogens and failure of normal negative feedback. However, luteinizing hormone itself cannot 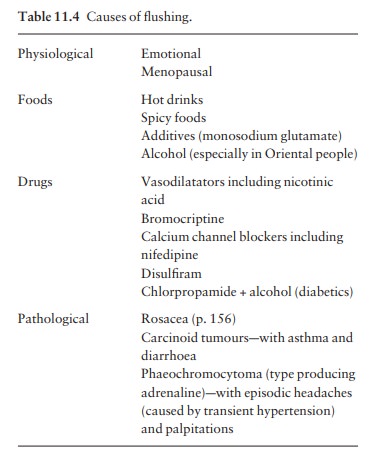 be responsible for flushing as this can occur after hypophysectomy. It is possible that menopausal flush-ing is mediated by central mechanisms involving encephalins. Hot flushes can usually be helped by oestrogen replacement. 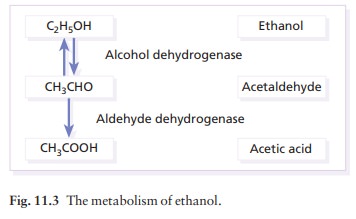