Although many systems have been suggested for classifying in-terview techniques .

Although many systems have been suggested for classifying in-terview techniques (Elliott et al., 1987), it is convenient to think about four major dimensions of interviewing style: degree of di-rectiveness, degree of emotional support, degree of fact versus feeling orientation and degree of feedback to the patient. The interviewer must seek a balance among these dimensions to best cover the needed topics, build rapport, and arrive at a plan of treatment.

Directiveness in the interview ensures that the necessary areas of information are covered and supplies whatever cognitive sup-port the patient needs in discussing them. Table 3.6 lists inter-ventions which are low, moderate and high in directiveness. 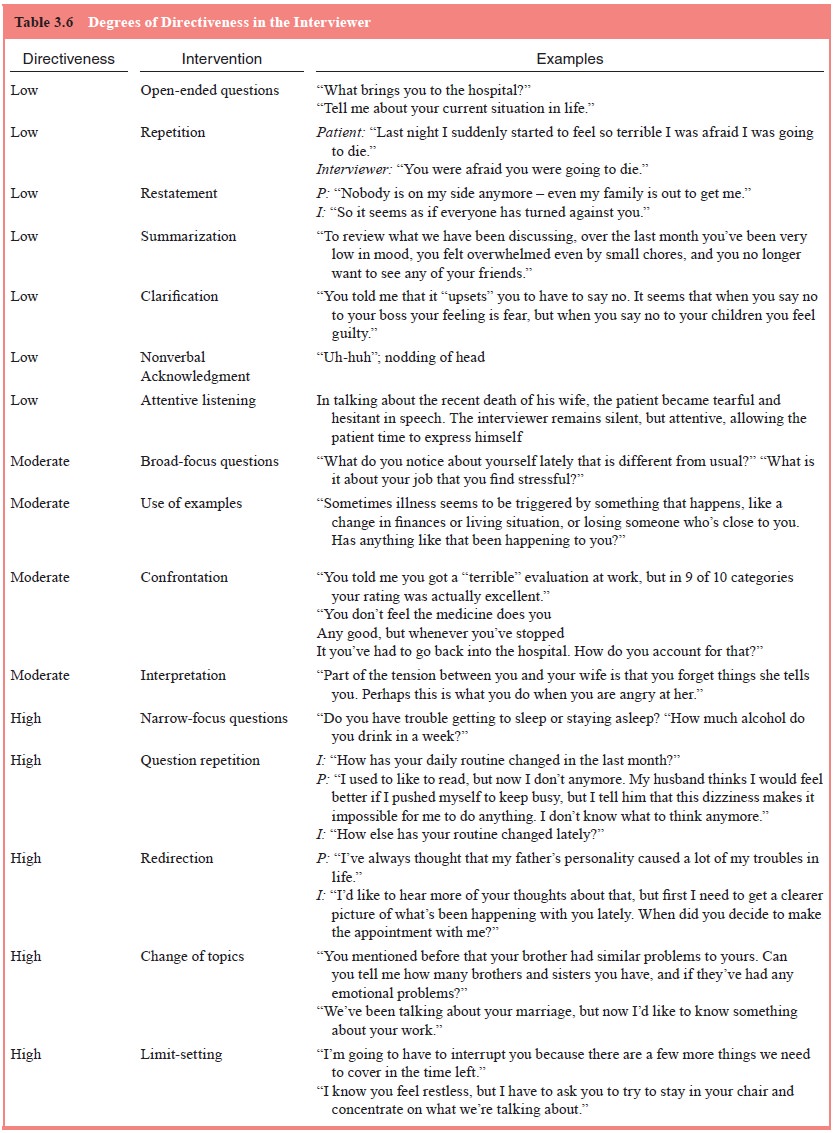 Patients vary considerably in the degree of emotional and cogni-tive support they need in the interview. Table 3.7 lists examples of emotionally supportive interventions. Each such intervention supports the patient’s sense of security and self-esteem. While some patients may come to the interview feeling safe and con-fident, others have considerable anxiety about being criticized, ridiculed, rejected, taken advantage of, or attacked (literally so in the case of some psychotic patients).

Overt manifestations of insecurity range widely, from fearful demeanor and tremulousness to requests for reassur-ance to haughty contemptuousness. The interview’s task is to identify such anxiety when it arises and respond in a manner. 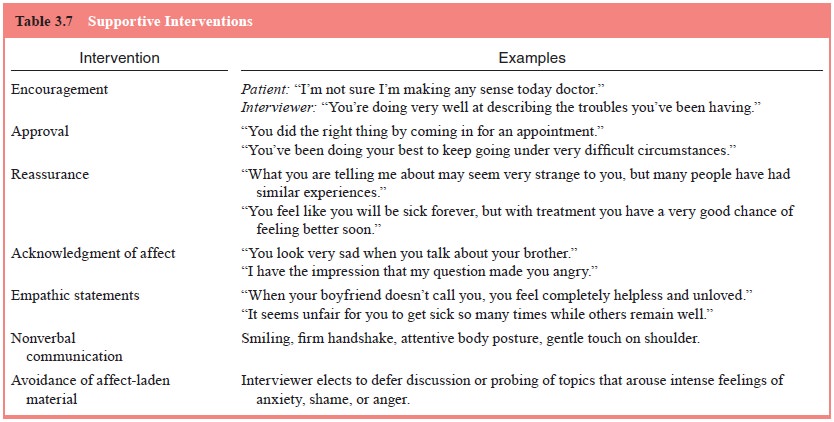 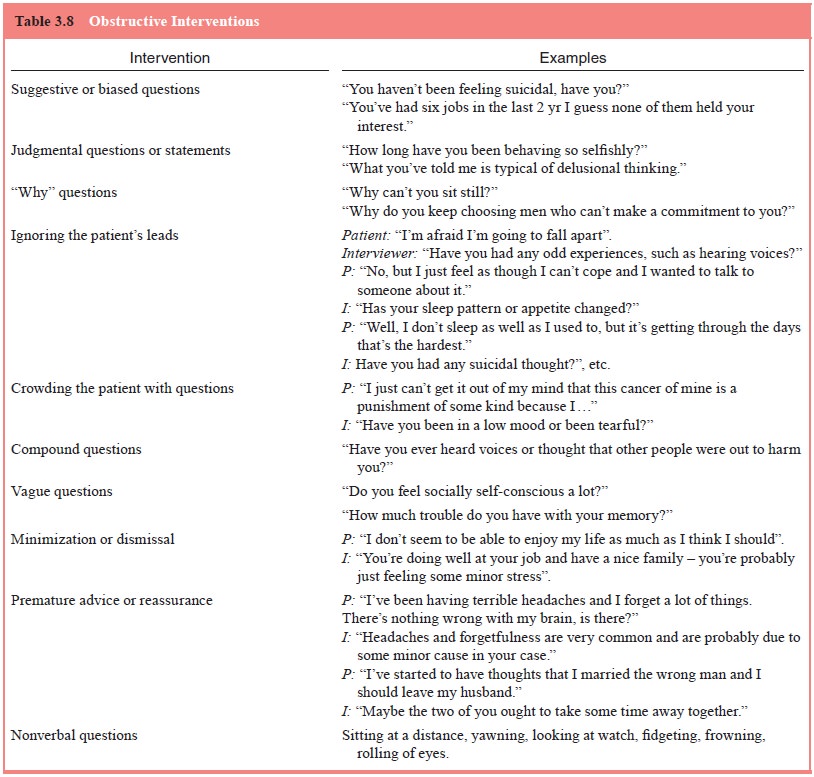 that conveys empathic understanding, acceptance and positive regard.

Obstructive interventions are one which (usually unin-tentionally) impede the flow of information and diminish rap-port. Table 3.8 lists common examples of such interventions. Compound or vague questions are often confusing to the pa-tient and may produce ambiguous or unclear answers. Biased or judgmental questions suggest what answer the interviewer wants to hear or that he/she does not approve of what the pa-tient is saying. “Why” questions often sound critical or invite rationalizations. “How” questions better serve the purposes of the interview (“How did you come to change jobs?” rather than “Why did you change jobs?”). Other interventions are obstructive because they disregard the patient’s feeling state or what he/she is trying to say. Paradoxically, this may in-clude premature reassurance or advice. When given before the interviewer has explored and understood the issue, this has the effect of cutting off feelings and coming to a premature closure.

Interviews differ in the degree to which they focus on factual– objective versus feeling–meaning oriented material. Tables 3.9 and 3.10 provide examples of interventions of both types. The interviewer must determine what the salient issues are in a given case and develop the focus accordingly. For example, at one extreme, the principal task in assessing a cyclically occurring mood disorder might be to delineate precisely the symptoms, time course and treatment response of the illness. At the other end of the spectrum might be a patient with a circumscribed dif-ficulty in living, such as the inability to achieve an intimate, last-ing love relationship. In such a case, the interviewer may focus not only on the facts of the patient’s interactions with others but also on the feelings, fantasies and thoughts associated with such relationships.

Interviews differ in how much the interviewer conveys to the patient of his/her own thoughts, feelings, conclusions and rec-ommendations. Table 3.11 presents common types of feedback from the interviewer. Judicious statements about the interview-er’s ongoing thoughts and feelings can be used to pose ques-tions or make clarifications or interpretations while enhanc-ing rapport and trust. Communication of factual information, formulations of the problem and treatment recommendations are the foundations of joint treatment planning with the patient. Responding to questions and giving advice may serve an edu-cational purpose as well as enhancing the alliance. When re-sponding to requests for advice or information, the interviewer must first take care to be sure of what is being asked, and for what reason. 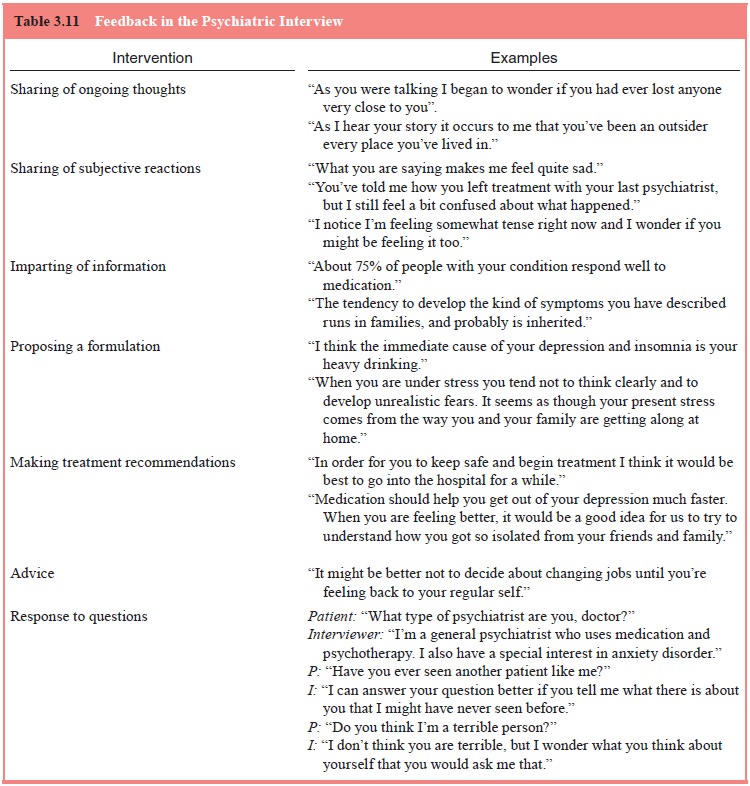 There is little systematic data on the superiority of one clinical interviewing style over another, but what there are suggest that many styles can be used effectively. Rutter and his colleagues have investigated this question in a series of natural-istic and experimental studies of interviews of parents in a child psychiatry clinic (Rutter et al., 1981; Cox et al., 1981, 1988). The major findings of these studies are:

·   Active, structured techniques are no better than nondirec-tive styles in eliciting positive findings (i.e., areas of pathol-ogy). However, active techniques are better in eliciting more detailed and thorough information in areas where pathol-ogy is found and are also better at delineating areas without pathology.

·   An active, fact-gathering style does not prevent the inter-viewer from effectively eliciting emotional reactions from informants.

·           Use of open questions, direct requests for feelings, interpreta-tions of feelings, and expressions of sympathy are associated with greater expression of emotions by informants.

·           In summary, techniques which actively elicit both facts and emotions are likely to produce the richest, most detailed da-tabase. When skillfully used, these do not impair the doctor– patient relationship.