What Is the Diagnosis?

In psychiatry, as in the rest of medicine, descriptive information about signs, symptoms and course over time is used to assign a diagnosis to the presenting problem.

What Is the Diagnosis?

In psychiatry, as in the rest of medicine, descriptive information about signs, symptoms and course over time is used to assign a diagnosis to the presenting problem. Not all psychiatric diag-noses have well-established validity, but most convey knowl-edge of prognosis, comorbidity, treatment response, occurrence in family members, or associated biological or psychological findings (Tischler, 1987). Even in the case of poorly understood entities, our present system of diagnosis using specific criteria maximizes uniformity in the description and naming of psychi-atric disorders. 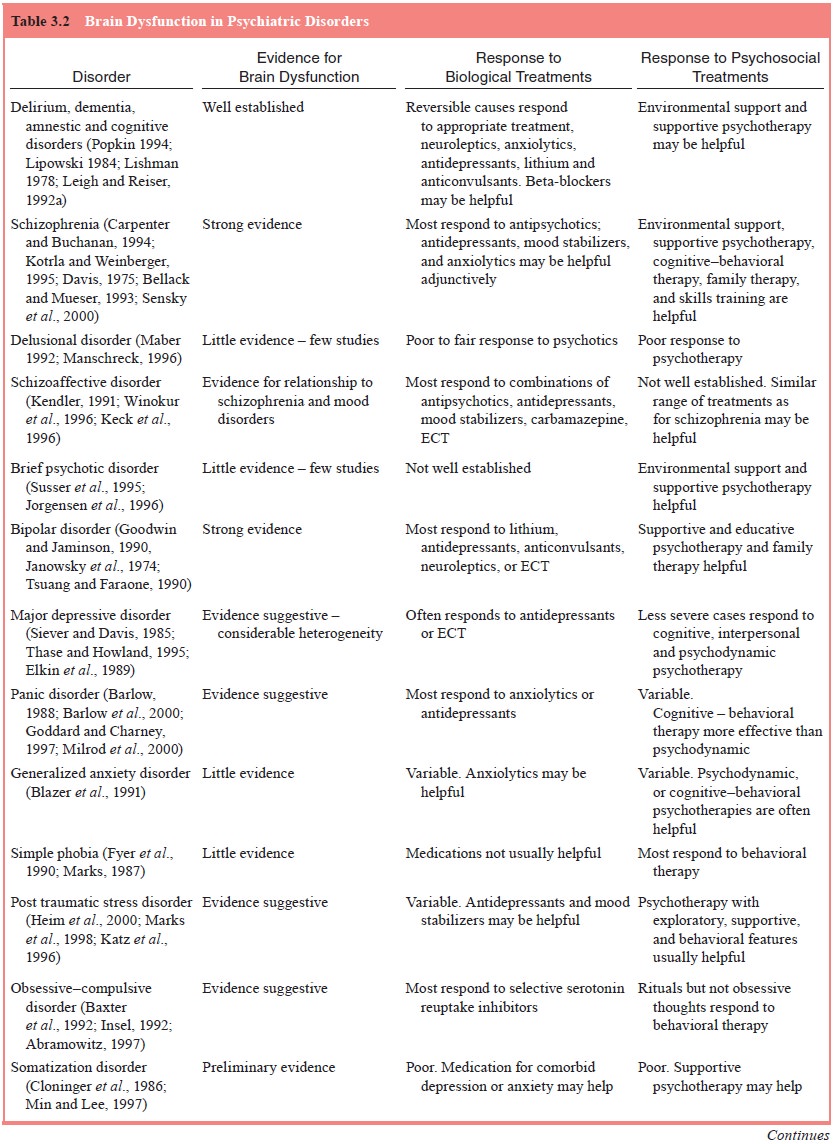 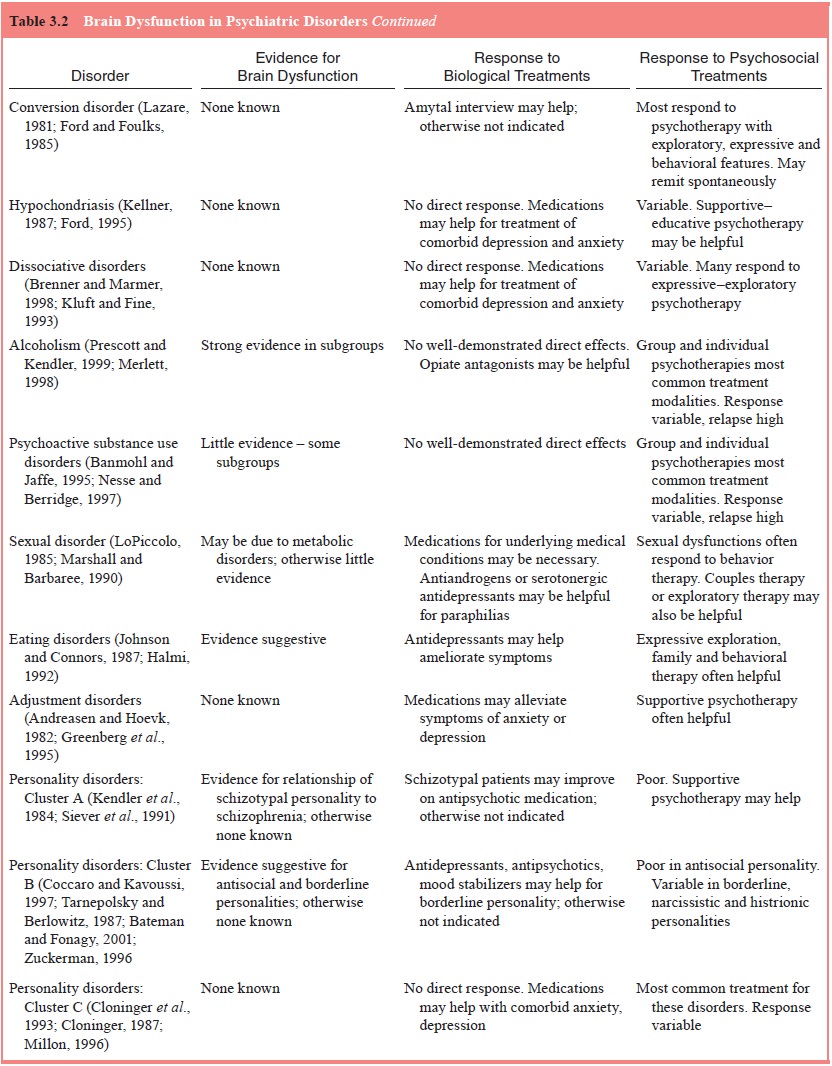 One important implication of diagnoses is whether there may be reduced plasticity of brain functioning due to anatomi-cal or physiological abnormalities. Symptoms, deficits and be-haviors which stem from such abnormalities vary less in re-sponse to environmental and motivational factors than those behaviors which arise in the context of normal brain function. For example, mood swings in a patient with bipolar disorder, a condition for which there is strong evidence of a biological–ge-netic etiology, typically recur at regular time intervals, often independently of the patient’s life situation. By contrast, mood swings in a patient with narcissistic personality disorder are much more likely to be triggered by interactions with other people. Furthermore, when brain function is impaired, biologi-cal treatments are more likely to be necessary, and verbal, in-terpersonal, or environmental interventions are less likely to be sufficient. Thus, the likelihood of altered brain function has major implications for understanding and treating the patient’s problems.

Although the question of brain abnormalities is basic to psychiatric triaging, we do not yet have a clearcut biological etiology for any disorder outside of those historically classi-fied as “organic”. Standard laboratory studies (such as brain imaging or electroencephalography) are not generally diag-nostic of psychopathology; however, there is research-based evidence of altered brain function in many psychiatric dis-orders. Table 3.2 presents an overview of the current state of knowledge of brain abnormalities in psychiatric disorders, along with known responses to biological and psychosocial treatments.

What Is the Patient’s Baseline Level of Functioning?

Determining what the patient has been like in his/her best or most usual state is a vital part of the assessment. This informa-tion allows the interviewer to gauge when the patient became ill, and how he/she is different when ill versus well. Environ-mental, biological and psychological factors that contribute to low baseline levels of functioning may also predispose a patient to the development of psychiatric disorders. Thus, in-formation about baseline functioning provides clues about the patient’s areas of vulnerability to future illness as well as his/ her capacity to benefit from treatment. It is also an important guide to realistic goals and expectations for such treatment. Table 3.3 lists major components of functioning with examples of elements of each. 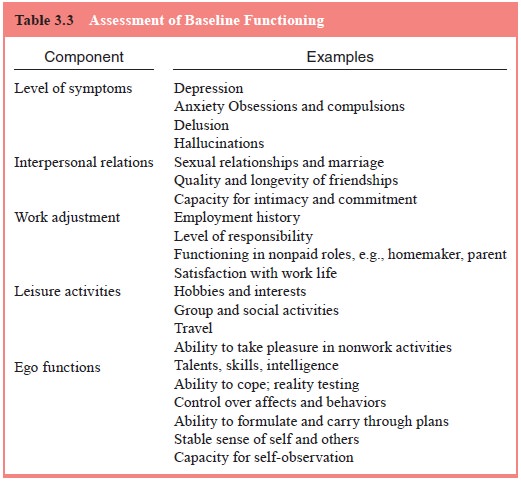 What Environmental Factors Contribute to the Disorder?

Environmental contributions to the presenting problem are factors external to the patient. They may be acute events which precipitate illness, or longstanding factors which increase general vulnerability. Loss, change and traumatic events are very common acute precipitants (Paykel, 1978). Longstand-ing environmental stressors may predispose the patient to the development of illness and may also worsen the outlook for recovery.

It is important to identify adverse environmental influ-ences which can be modified, and to help the patient or family make necessary changes. For example, a patient with recurrent paranoid psychosis needed yearly hospitalization as long as she worked in an office with many other people. However, she no longer suffered severe relapses when she was helped to find work which she could do in her own home. However, even irreversible precipitants, such as death of a loved one, must be identified and dealt with in the treatment plan.

What Biological Factors Contribute to the Disorder?

Biological factors may contribute to psychiatric disorders directly by their effects on the central nervous system and indirectly through the effects of pain, disability, or social stigma. Thus, biological factors must be assessed through both the psychiatric history and diagnosis, and the general medical history.

Biological factors affecting the central nervous system may be genetic, prenatal, perinatal, or postnatal. There is strong evidence of genetic contributions to schizophrenia, bipolar dis-order and alcoholism, among others (Carpenter and Buchanan, 1994; Jorgensen et al., 1996; Kluft and Fine, 1993); conditions such as maternal substance abuse or intrauterine infections mayaffect fetal brain development; birth complications may cause cerebral hypoxia with resultant brain damage. In postnatal life, the entire range of diseases which affect the brain may alter men-tal function and behavior, as may exposure to toxins at work, in the environment, and through substance abuse. In addition, medical conditions which do not directly affect brain functioning may have profound effects on the patient’s state of mind and behavior.

Biological factors may both predispose to and precipi-tate episodes of illness. Thus, a patient with a genetic vulner-ability to schizophrenic illness may have an episode of acute psychosis precipitated by heavy cocaine use. Similarly, a pa-tient with borderline low intellectual capacity due to hypoxia at birth may have marginal ability to care for herself. An accident resulting in a fractured arm might overwhelm this person’s coping capacity and precipitate a severe adjustment disorder.

What Psychological Factors Contribute to the Disorder?

Psychological factors are mental traits which the patient brings to life situations. While they interact with social and environmen-tal factors, they are intrinsic to the individual, and not readily changed by outside influences.

Psychological factors predisposing to illness include both general and focal deficits in coping adaptability. General defi-cits encompass the entire range of ego functioning, including poor reality testing, rigid or maladaptive psychological defense mechanisms, low ability to tolerate and contain affects, impulsiv-ity, poorly formed or unstable sense of self, low self-esteem and hostile, distant, or dependent relationships with others (Valliant, 1977). Patients with such deficits generally meet diagnostic crite-ria for one or more personality disorders and are at increased risk for episodes of acute psychiatric illness. An example of general deficits in psychological functioning is illustrated by the follow-ing case. 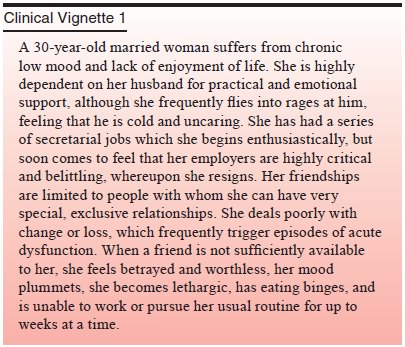 Focal psychological issues may also contribute to mental disorders. These issues, which typically involve conflicts between opposing motivations, may affect the patient in certain specific areas of function or life situations, leaving other broad areas of function intact (Nemiah, 1961a). Such conflicts are most likely to cause maladaptive behaviors or symptoms when the patient is not clearly aware of them. 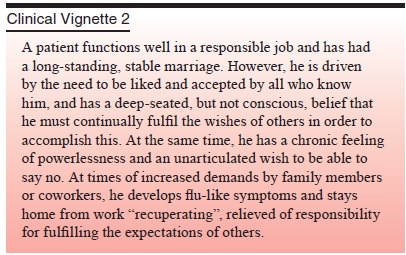 The meaning of an event in the context of the patient’s life course is another focal issue which may contribute to illness.

What Is the Patient’s Motivation and Capacity for Treatment?

Whatever the physician’s view of the presenting problem, the patient’s wishes and capacities are a major determinant of treat-ment choice (Lazare et al., 1975). Some patients seek relief of symptoms; some wish to change their behavior or the nature of their relationships; some want to understand themselves better. Patients may wish to talk or to receive medication or instructions.

The patient’s capacity for treatment must also be consid-ered in the treatment plan. For example, a patient with schizo-phrenia may agree to medication but be too disorganized to take it reliably without help. Suitability for exploratory psychotherapy depends upon such factors as the ability to observe oneself, toler-ate unpleasant affects, and establish and maintain a working rela-tionship with the treater (Strupp and Binder, 1984). Such factors must be evaluated in the interview.