This information establishes the patient’s identity, especially for the purpose of obtaining past history from other contacts, when necessary, as well as to fix his/her position in society.

This information establishes the patient’s identity, especially for the purpose of obtaining past history from other contacts, when necessary, as well as to fix his/her position in society. The pa-tient’s name should be recorded, along with any nickname or al-ternative names he/she may have been known by in the past. This is important for women who might have been treated previously under a maiden name, or a patient who has had legal entangle-ments and so has adopted aliases.

Date of birth, or at least age, and race are other essen-tial parts of every person’s database. A number of different classifications for race exist, as well as different terms and con-troversies (Porter, 1993). In the USA and Canada, the categories of white, black (or African-American), Asian, Native American, and others are generally accepted. The additional modifier of ethnicity, especially Hispanic/nonHispanic, is becoming more widely used. If a patient is a member of a particular subculture based on ethnicity, country of origin, or religious affiliation, it may be noted here.

A traditional part of the identifying data is a reference to the patient’s civil status: single, married, separated, divorced, or widowed. The evolution of relationship patterns over the last two decades, with less frequent formalization of rela-tionships, has made classification more difficult (Ishii-Kuntz and Tallman, 1991), especially in the case of homosexual pa-tients, whose relationships are not legally recognized in most jurisdictions.

The patient’s social security number (or other national ID number) can be a very useful bit of data when seeking informa-tion from other institutions.

In most cases, it is assumed that the informant (supplier of the history) is the patient. If other sources are used, and espe-cially if the patient is not the primary informant, this should be noted at the beginning of the database.

The chief complaint is the patient’s responses to the question, “What brings you to see me/to the hospital today?” or some vari-ant. It is usually quoted verbatim, placed within quotation marks, and should be no more than one or two sentences.

Even if the patient is very disorganized or hostile, quoting his response can give an immediate sense of where the patient is as the interview begins. If the patient responds with an exple-tive, or a totally irrelevant remark, the reader of the database is immediately informed about how the rest of the information may be distorted. In such cases, or if the patient gives no response, a brief statement of how the patient came to be evaluated should be made and enclosed in parentheses.

History of the Present Illness

The present illness history should begin with a brief description of the major symptoms which brought the patient to psychiatric attention. The most troubling symptoms should be detailed ini-tially; later a more thorough review will be stated. As a minimum, the approximate time since the patient was last at his baseline level of functioning, and in what way he is different from that now, should be described, and any known stressors, the sequence of symptom development, and the beneficial or deleterious effects of interventions included.

How far back in a patient’s history to go, especially when he has chronic psychiatric illness, is sometimes problematic. In patients who have required repeated hospitalization, a summary of events since last discharge (if within 6 months) or last stable baseline is indicated. It is rare that more than 6 months of his-tory be included in the history of the present illness, and detailed history is more commonly given on the past month.

A more expanded description of the history of the present illness would include events in a patient’s life at the onset of symptoms, as well as exactly how the symptoms have affected the patient’s occupational functioning and important relationships. Any concurrent medical illness symptoms, medication usage (and particularly changes), alterations in the sleep–wake cycle, appe-tite disturbances and eating patterns should be noted; significant negative findings should also be remarked upon.

Most of the major psychiatric illnesses are chronic in nature. For this reason, often patients have had previous episodes of illness with or without treatment. New onset of symptoms, without any previous psychiatric history, becomes increasingly important with advancing age in terms of diagnostic categories to be con-sidered. At a minimum, the presence or absence of past psychi-atric symptomatology should be recorded, along with psychiatric interventions taken and the result of such interventions. An ex-plicit statement about past suicide and homicide attempts should be included.

How far back in a patient’s history to go, especially when he has chronic psychiatric illness, is sometimes problematic. In patients who have required repeated hospitalization, a summary of events since last discharge (if within 6 months) or last stable baseline is indicated. It is rare that more than 6 months of his-tory be included in the history of the present illness, and detailed history is more commonly given on the past month.

In any clinical assessment, it is important to know how a patient’s general health status has been. In particular, any current medical illness and treatment should be noted (Slaby and Andrew, 1987), along with any major past illness requiring hospitalization. Pre-vious endocrine or neurological illness are of particular perti-nence (Flomenbaum and Altman, 1985)

An expanded database could well include significant childhood illnesses, how these were handled by the patient and his fam-ily, and therefore the degree to which the patient was able to develop a sense of comfort and security about his physical well-being. Illnesses later in life should be assessed for the degree of regression produced. The amount of time a patient has had to take off work, how well he/she was able to follow a regimen of medical care, his/her relationship with the family physician or treating specialist can all be useful in predicting future re-sponse to treatment. A careful past medical history can also at times bring to light a suicide attempt, substance abuse, or dangerously careless behavior, which might not be obtained any other way.

Given the evidence for familial, genetic factors in so many psychiatric conditions, noting the presence of mental illness in biological relatives of the patient is a necessary part of any database (Hammen et al., 1987). It is important to specify during questioning the degree of family to be considered – usually to the second degree: aunts, uncles, cousins and grandparents, as well as parents, siblings and children.

A history of familial medical illness is a useful part of an ex-panded database. A genogram (pedigree), including known fam-ily members with dates and causes of death and other known chronic illnesses is helpful. Questioning about causes of death will also occasionally bring out hidden psychiatric illness, for example, sudden, unexpected deaths which were likely suicides or illness secondary to substance abuse.

Recording the story of a person’s life can be a daunting under-taking and is often where a database can expand dramatically. As a minimum, this part of the history should include where a patient was born and raised, and in what circumstances – intact family, number of siblings and degree of material comfort. Note how far the patient went in school, how he/she did there, and what his/her occupational functioning has been. If he/she is not working, why not? Has the patient ever been involved in crimi-nal activity, and with what consequences? Has the patient ever married or been involved in a committed relationship? Are there any children? What is his/her current source of support? Does he/she live alone or with someone? Has he/she ever used alcohol or other drugs to excess, and is there current use? Has he/she ever been physically or sexually abused or been the victim of some other trauma?

An expanded database can include a great deal of material begin-ning even prior to the patient’s conception. What follows is an outline of the kind of data which may be gathered, along with an organizational framework.

Were parents married or in committed relationships?

Personality and significant events in life of mother, father, or other significant caregiver.

Siblings: how many? their ages, significant life events, person-ality, relationship to patient.

Who else shared the household with the family?

Was the pregnancy planned? Quality of prenatal care; mother’s and father’s response to pregnancy.

Baby went home with mother or stayed on in hospital.

Consistency of caregiving: interruptions by illness, birth of siblings.

Behavioral problems at home or school: firesetting, bedwetting, aggressive toward others, cruelty to animals, nightmares.

Relationships with other children and family: any loss or trauma.

School performance: ever in special classes?

Athletic abilities and participation in sports.

Evidence of gender identity concerns: overly “feminine” or “masculine” in appearance/behavior, or perception by peers.

Ever run away? Able to be left alone and assume responsibility. Age onset of puberty (menarche or nocturnal emissions), reaction to puberty.

Episodes of impotence and reaction.

Age at which left home, level of educational attainments. Employment history, relationships with supervisors and peers at work, reasons for job change.

History of significant relationships including duration, typical roles in relationships, patterns of conflict: mari-tal history, legal entanglements and criminal history, both covert and detected, ever victim or perpetrator of violence.

Financial status: own or rent home, stability of living situation. Ever on disability or public assistance?

It can be helpful to conceptualize the recording of the Men-tal Status Examination as a progression. One begins with a snapshot: what can be gained from a cursory visual exam, without any movement or interaction – appearance and affect. Next, motion is added: behavior. Then comes sound: the pa-tient’s speech, though initially only as sound. The ideas being expressed come next: the thought process and content, per-ception, cognition, insight, and judgment. Table 3.5 gives a summary of areas to be commented on, along with common terms. 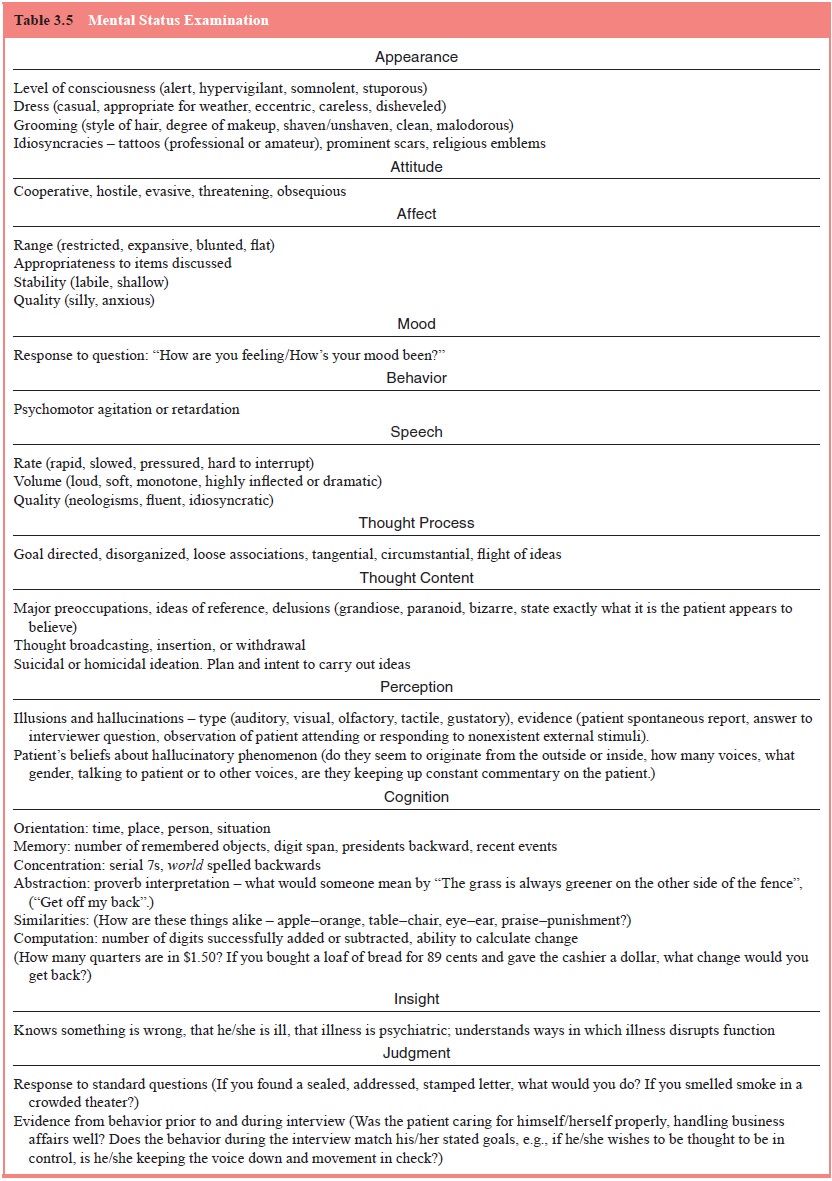 At every level of the Mental Status Examination, prefer-ence should be given for explicit description over jargon. Stating that a patient is delusional is less helpful than describing him as believing that his neighbors are pumping poisonous gases into his bedroom while he sleeps.