OA, also known as degenerative joint disease or osteoarthrosis (even though inflammation may be present), is the most common and frequently disabling of the joint disorders.

OA, also known as degenerative joint disease or osteoarthrosis (even though inflammation may be present), is the most common and frequently disabling of the joint disorders. OA is both over-diagnosed and trivialized; it is frequently overtreated or under-treated. The functional impact of OA on quality of life, especially for elderly patients, is often ignored.

OA has been classified as primary (idiopathic), with no prior event or disease related to the OA, and secondary, resulting from previous joint injury or inflammatory disease. The distinction be-tween primary and secondary OA is not always clear.

Increasing age directly relates to the degenerative process in the joint, as the ability of the articular cartilage to resist micro-fracture with repetitive low loads diminishes. OA often begins in the third decade of life and peaks between the fifth and sixth decades. By age 75 years, 85% of the population has either x-ray or clinical evidence of OA, but only 15% to 25% of these people experience significant symptoms (Ruddy et al., 2001).

OA may be thought of as the end result of many factors combin-ing in a generalized predisposition to the disease. OA affects the articular cartilage, subchondral bone (the bony plate that sup-ports the articular cartilage), and synovium. A combination of cartilage degradation, bone stiffening, and reactive inflammation of the synovium occurs. The basic degenerative process in the joint exemplified in OA is presented in Figure 54-6. Under-standing of OA has been greatly expanded beyond what previ-ously was thought of as simply “wear and tear” related to aging. Risk factors for OA are summarized in Chart 54-3. 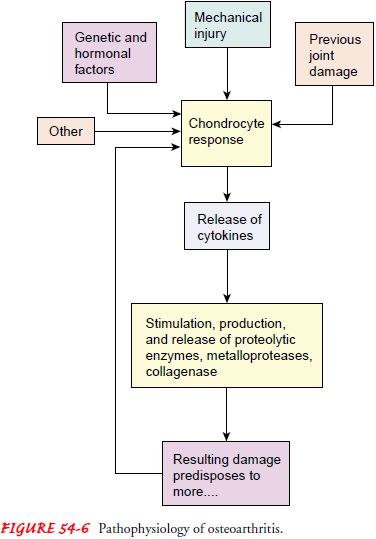 Congenital and developmental disorders of the hip are well known for predisposing a person to OA of the hip. These include congenital subluxation–dislocation of the hip, acetabular dysplasia, Legg-Calvé-Perthes disease, and slipped capital femoral epiphysis.

Obesity is now a well-recognized risk factor for the develop-ment of OA (USDHHS, 2001). Being overweight or obese also increases the pain and discomfort associated with the disease (Altman et al., 2000; Coggon et al., 2001).

The primary clinical manifestations of OA are pain, stiffness, and functional impairment. The pain is due to an inflamed synovium, stretching of the joint capsule or ligaments, irritation of nerve endings in the periosteum over osteophytes, trabecular micro-fracture, intraosseous hypertension, bursitis, tendinitis, and mus-cle spasm. Stiffness, which is most commonly experienced in the morning or after awakening, usually lasts less than 30 minutes and decreases with movement. Functional impairment is due to pain on movement and limited motion caused by structural changes in the joints.

Although OA occurs most often in weight-bearing joints (hips, knees, cervical and lumbar spine), the proximal and distal finger joints are also often involved. Characteristic bony nodes may be present; on inspection and palpation, these are usually painless, unless inflammation is present.

Diagnosis of OA is complicated because only 30% to 50% of patients with changes seen on x-rays report symptoms. Physical assessment of the musculoskeletal system reveals tender and en-larged joints. Inflammation, when present, is not the destructive type seen in the connective tissue diseases such as RA. OA is char-acterized by a progressive loss of the joint cartilage, which appears on x-ray as a narrowing of joint space. In addition, reactive changes occur at the joint margins and on the subchondral bone in the form of osteophytes (or spurs) as the cartilage attempts to regenerate. Neither the presence of osteophytes nor joint space narrowing alone is specific for OA; however, when combined, these are sensitive and specific findings. In early or mild OA, there is only a weak correlation between joint pain and synovitis. Blood tests are not useful in the diagnosis of OA.

Although no treatment halts the degenerative process, certain preventive measures can slow the progress if undertaken early enough. These include weight reduction, prevention of injuries, perinatal screening for congenital hip disease, and ergonomic modifications.

Pharmacologic management of OA is directed toward symptom management and pain control. Medications are used in conjunc-tion with nonpharmacologic strategies, which are the mainstay of OA management (Altman et al., 2000). In most patients with OA, the initial analgesic therapy is acetaminophen. Some patients respond to the nonselective NSAIDs, and patients who are at in-creased risk for gastrointestinal complications, especially gastro-intestinal bleeding, have been managed effectively with COX-2 inhibitors (Altman et al., 2000; Beehrle & Evans, 1999; Bom-bardier et al., 2000; Pasero & McCaffery, 2001; Ruddy et al., 2001). Selection of medication is based on the patient’s needs, the stage of disease, and the risk for side effects. Other medications that may be considered are the opioids and intra-articular cortico-steroids. Topical analgesics such as capsaicin and methylsalicylate are also recommended (Altman et al., 2000; Ruddy et al., 2001).

Newer therapeutic approaches include glucosamine and chon-droitin, which are thought to improve tissue function and retard breakdown of cartilage (Altman et al., 2000; McAlindon et al., 2000). Viscosupplementation, the intra-articular injection of hyal-uronic acid, is thought to improve cartilage function and retard degradation; it may also have some anti-inflammatory effects (Huskisson & Donnelly, 1999; Watterson & Esdaile, 2000; Wright et al., 2000). Glucosamine and chondroitin and viscosupplementation, although approved by the FDA, are still under-going intensive investigation for safety and efficacy (Brandt et al., 2000).

In moderate to severe OA, when pain is severe or because of loss of function, surgical intervention may be used. Procedures most commonly used are osteotomy (to alter the force distribution in the joint) and arthroplasty. In arthroplasty, diseased joint com-ponents are replaced with artificial products.

Other procedures include viscosupplementation (the recon-stitution of synovial fluid viscosity). Hyaluronic acid (Hyalgan, Synvisc), a glycosaminoglycan that acts as a lubricant and shock-absorbing fluid in the joint, may be used in this procedure. Hyaluronic acid stimulates the production of synoviocytes, pos-sibly providing better and more prolonged pain control. A series of three to five weekly intra-articular injections are given. Pain relief may last for 6 months (Kellick et al., 1998).

Tidal irrigation (lavage) of the knee involves the introduction and then removal of a large volume of saline into the joint through cannulas. In some cases it provides pain relief for up to 6 months (Klippel, 2001; Lozada & Altman, 2001).

The nursing management of the patient with OA includes both pharmacologic and nonpharmacologic approaches. The non-pharmacologic interventions are used first and continued with the addition of pharmacologic agents. Pain management and op-timizing functional ability are major goals of nursing intervention. Patients’ understanding of their disease process and symptom pattern is critical to a plan of care. Because patients with OA are older, they may have other health problems. Commonly they are overweight, and they may have a sedentary lifestyle. Weight loss and an increase in aerobic activity such as walking, with special attention to quadriceps strengthening, are important approaches to pain management (Altman et al., 2000; Bautch et al., 1997; Ettinger et al., 1997). A referral for physical therapy or to an ex-ercise program for individuals with similar problems may be very helpful. Canes or other assistive devices for ambulation should be considered. Exercises such as walking should be begun in mod-eration and increased gradually. Patients should plan their daily exercise for a time when the pain is least severe or should plan to use an analgesic, if appropriate, before exercising. Adequate pain management is important for the success of an exercise program.