Creating a CSV file using Notepad (or any text editor)

A CSV file is a text file, so it can be created and edited using any text editor, But more frequently a CSV file is created by exporting a spreadsheet or database in the program that created it.

Creating a CSV file using Notepad (or any text editor)

A CSV file is a text file, so it can be created and edited using any text editor, But more frequently a CSV file is created by exporting a spreadsheet or database in the program that created it.

To create a CSV file in Notepad, First open a new file using

Then enter the data you want the file to contain, separating each value with a comma and each row with a new line.

For example consider the following details 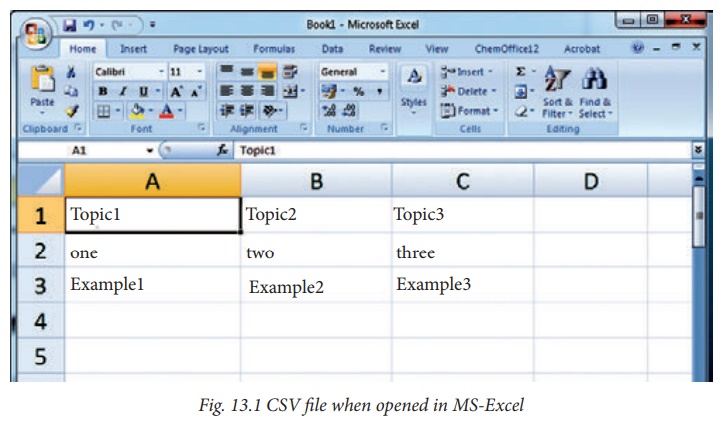 In the above CSV file, you can observe the fields of data were separated by commas. But what happens if the data itself contains commas in it?

If the fields of data in your CSV file contain commas, you can protect them by enclosing those data fields in double-quotes (“). The commas that are part of your data will then be kept separate from the commas which delimit the fields themselves.

For example, let’s say that one of our fields contain commas in the description. If our data looked like the below example:

To retain the commas in “Address” column, you can enclose the fields in quotation marks. For example:

As you can see, only the fields that contain commas are enclosed in quotes. If you open this in MS Excel, It looks like as follows 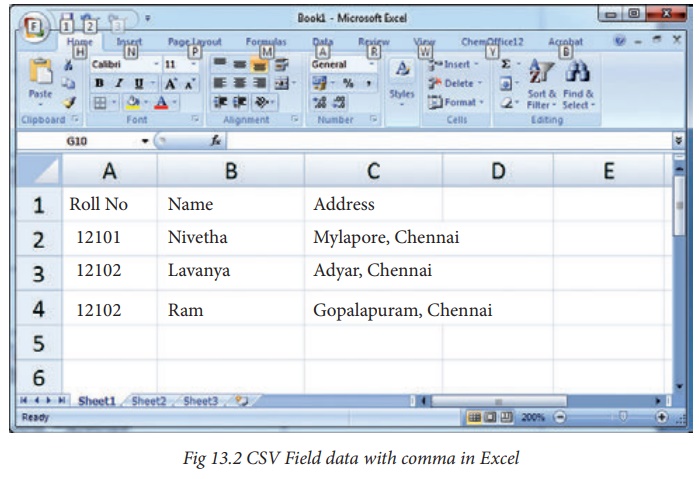 The same goes for newlines which may be part of your field data. Any fields containing a newline as part of its data need to be enclosed in double-quotes.

It should be written in CSV file as 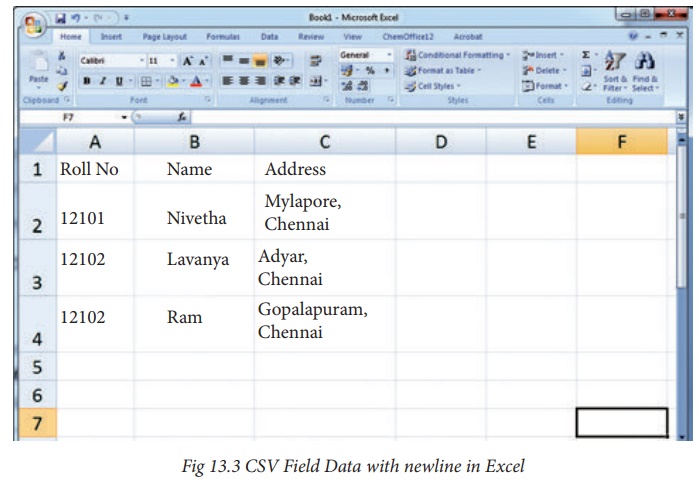 If your fields contain double-quotes as part of their data, the internal quotation marks need to be doubled so that they can be interpreted correctly. For Example, given the following data:

It should be written in csv file as

The output will be 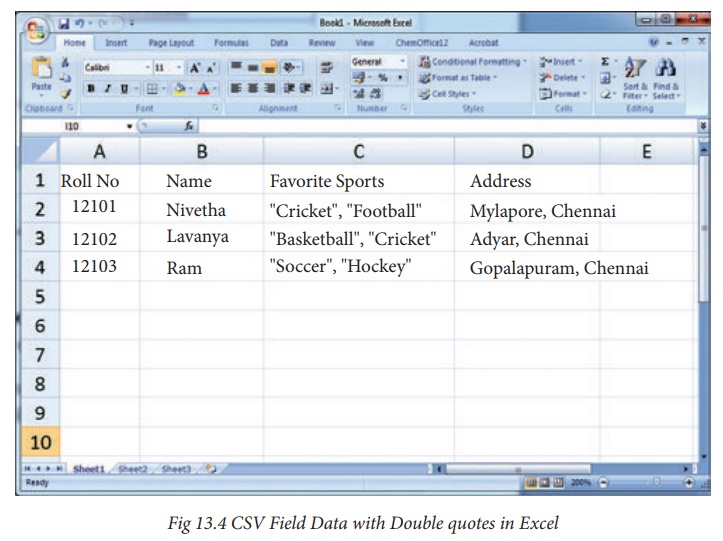 Rules to be followed to format data in a CSV file

1. Each record (row of data) is to be located on a separate line, delimited by a line break by pressing enter key. For example:

2. The last record in the file may or may not have an ending line break. For example:

3. There may be an optional header line appearing as the first line of the file with the same format as normal record lines. The header will contain names corresponding to the fields in the file and should contain the same number of fields as the records in the rest of the file. For example: field_name1,field_name2,field_name3

4. Within the header and each record, there may be one or more fields, separated by commas. Spaces are considered part of a field and should not be ignored. The last field in the record must not be followed by a comma. For example: Red , Blue

6. Fields containing line breaks (CRLF), double quotes, and commas should be enclosed in double-quotes. For example:

Red, “,”, Blue CRLF # comma itself is a field value.so it is enclosed with double quotes Red, Blue , Green

7. If double-quotes are used to enclose fields, then a double-quote appearing inside a field must be preceded with another double quote. For example: